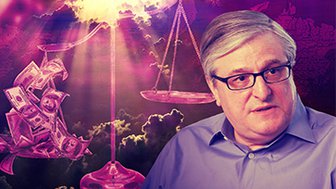 Dan Oliver of Myrmikan Capital and Simon Mikhailovich of the…

Venture capitalist Bill Janeway gives Real Vision a look inside climate change and the changes, both financial and human, it might affect. Looking at collective responses to prior crises, Janeway lays out how those consequences might take form. This video is excerpted from a piece published on Real Vision on December 31, 2018.

BILL JANEWAY: Will China actually succeed in moving from being the most effective follower in history to the next leader of the innovation economy?

The really biggest strategic question-- US has now had a run about 100 years as the undoubted acknowledged leader of the innovation economy, not just the military leader, but the leader of developing, deploying, and showing what to do with this new stuff.

Well, the question that I have-- the biggest strategic question is, will China actually succeed in moving from being the most effective follower in history to the next leader of the innovation economy? I don't know. They don't know.

This 3-player game with Chinese characteristics between their state, their financial markets, their evolving market economy-- it's an indeterminate game. But we do know that for the last 10 years, they've been spending more money on R&D in green and clean tech technologies.

They have the authority of the state if deployed. And they certainly have signed to that to mobilize the resources to shift radically the carbon content of their economy. And, as I say, we've abdicated. I don't know what the answer to that question is. Our children will-- our children will learn what it is.

And it's an enormous strategic question that goes beyond the immediate political arguments in the US of which I think the single most important is, whether we can-- maybe not until beyond 2020-- try to play catch up if World War II hadn't happened, if Korea hadn't happened, if the Defense Department in 1950 had been the size of the Defense Department in 1938, the digital revolution would still have happened.

BRIAN PRICE: When was the last time you were this worried? Or is the most worried you've ever--

BRIAN PRICE: So those 2 points in time, 2007, and where we're at right now are comparable.

BILL JANEWAY: Comparable, certainly, in concern. There, the concern was immediate. Now, during my-- what I call my 35-year sabbatical from Cambridge University when I was working as a venture capitalist, I got to know one maverick renegade, brilliant economist really well. His name was Hyman Minsky-- the Minsky moment.

The student of how financial systems evolve from stable, conservative to increasingly speculative to ultimately crazy, looking for a crisis, as we were in 2007. And because of Minsky, as well as my experience as a graduate student writing on 1931, I was really tuned in to the threat of a financial crisis at the time when only a few people, like Nouriel Roubini, were talking about it.

This is different, because this is long-term. This is going to unfold over time. I think we know that, first of all, we're not going to go back to the way the world was before Trump was elected or before the Brexit referendum took place. There are consequences. And we're going to be living with these consequences for a long time.

And I expect that they will hobble us in responding to this threat and challenge, which should be an opportunity of climate change. But it's going to slow us down. The amount of emotional investment on the part of those who are denying it or that attempting to deal with it would destroy jobs.

Well, look, the coal industry is gone. And the jobs left to be destroyed, the coal industry-- we probably could fit into the Garment District of New York and still have plenty of room for more employment. But the opportunity that's being forgone is tragic.

And the costs that are going to be born always, always, inevitably, by those least capable of burying them are tragic. I sometimes in a somewhat cynical mode say, there's bad news that becomes good news. But then it becomes bad news.

BRIAN PRICE: Just like failure can lead to tremendous success.

The good news is that when we do, Palm Beach is going to be under 5 yards of water. But the bad news is, by the time that those who have finally seen the consequences of climate change are motivated to want to do something about it, it's too late.