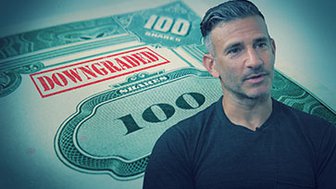 Glenn Reynolds, chief global strategist at CreditSights, joins Vincent Catalano, CIO of Redmount Capital Partners, to talk about what an inverted yield curve actually means. Reynolds argues that recent inversion are different from those in the past, and explains why that matters to investors. This clip is excerpted from a video published on Real Vision on June 27, 2019 entitled "Does the Yield Curve Matter?"

GLENN REYNOLDS: But curves are more- just call it symptoms than causes. So, the way we look at this current inverted yield curve, when you're talking about rates that are below 2% from 1-Year almost out to 10-Year, we just bumped back above 2%, it's a very different backdrop in past inverted yield curves.

Well, the history is- and this is the way the economists typically view it as an inverted yield curve is the precursor to a cyclical downturn, it's the signal. It's coming. But you really haven't had that many credit cycle downturns. And you had plenty of times where you've had flat curves and inverted curves which didn't immediately lead to it. So, it becomes more of a warning sign.

But curves are more- just call it symptoms than causes. So, the way we look at this current inverted yield curve, when you're talking about rates that are below 2% from 1-Year almost out to 10-Year, we just bumped back above 2%, it's a very different backdrop in past inverted yield curves. And really, what you have to do is go behind the curve and look at what's going on in the fundamental stress points of the market. And every time you've looked at an inverted yield curve in the past that led to a downturn '89, 2000, '06, there was a raft of structural problems, fundamental problems, industry stress, asset class turmoil- there was a lot going on behind the scenes. And you we don't have that right now.

What it does say is that the market's afraid of something. When you have flight to quality or when you have a reversal of a tightening cycle for the Fed to cut, that leads to the next question, well, what does that fixed income markets see in the bond market that rallying equity markets and rallying credit markets don't see? And therein lies the debate.

VINCENT CATALANO: The UK, typically, whenever it inverts, it's where the short rises above the long. But we have a little bit of the ladder where the long is dropping below the short, the short has risen, granted. But in the past, that's the- I've looked at it with the data from the same that was Fed, in which they showed is like convergence with all- you got the short rising, and then it meets together, and then there might be a bit of an inversion going on. That's not really what's going on right now. It's not so much the short rising as it is, then the long declining and I know, you just touched on an aspect of that. Thoughts on that quality, that dimension of it does it mean anything to you?

GLENN REYNOLDS: Well, historically, you've had inflation periods late in credit cycles. The historical credit cycle was market blows up, Fed eases, market recovers, curve goes north, Fed tightens. You didn't have that, you had seven years of zero interest rate policy this cycle that's unprecedented. And since you had the strangest credit crisis in modern capital markets history in the last go-around, it probably shouldn't be surprising that this was a bit of a different type of transition to a late cycle.

Starting Monday, we'll be in the longest economic expansion in history. And we're already in the longest credit cycle in history. So, there's a lot of things that are unusual about this, but that inversion from, for example, overnight, or three months down to one year, that is something that you don't see very often when the long end's coming down. And what you really have is an inversion on the front end, and it steepened from 1-Year out to 10-Year. So, it's almost like you break it up into a combination of an inversion and what some people would call off, they want to overdo the lingo, it's actually a bull steepener.

You don't see that every day, because you had the front end coming down faster than the long end. And that gets tied up in the inflation story. And also, the question marks around what people who are rushing into Treasuries actually see, and a lot of what people put it back on is trade policy and global turmoil. So, that's a flight to quality. But then why is equities rising sharply? Why are credit spreads tightening in high yield? And what you're going to have is someone's going to be wrong, and someone's going to be wrong, and it will be painful.

It's just a matter of timing that, because you can have a lot of interment adjustments in the curve. We've had flash curves before in the '90s in particular, where the market kept doing very well, then it would steepen, then it would flatten again, but have flattened from what we would call a bear flattener with the front end coming up in an inflation market. This is a pretty unique animal this cycle, and it's making some pretty vigorous debates. But if you're a bear, and you traded just off the yield curve, you just would have gotten slotted this year. So, if you do have conviction in that trade, it's a painful journey to get there.

VINCENT CATALANO: Now, there have been some strong benefits from the fact of the loan rates being as low as they are. Debt service has been fine, even though debt to GDP, a whole range of statistics that are out there showing corporate debt to GDP being at record levels. I think you have sovereigns to GDP also had record levels. And this is what good GDP happening in most cases or at least positive GDP, that's a positive dimension of it.

A negative dimension would be the investors. The investor is looking for pension funds, for example, endowments, insurance companies, what are they going to do when their mandate is to have let's say X percent in fixed income, this reach for yield is grabbing. We've not seen too much in the way of problems, like your thoughts on this, in terms of the faults and risk and stuff like that. But what is your sense of what's going on with that, with the pressures on investors to find rates of return that will enable them to achieve their required returns?

GLENN REYNOLDS: Yeah, it's an interesting dilemma right now, because reach for yield historically is a phrase that connotes reckless lending, reckless investing, therefore feeding on itself and bringing out more of both. But you really haven't had that. This is actually the highest quality origination cycle we've had, for example, in the high yield markets as grading on the curve against past cycles, which, frankly, is not a particularly great curve, because we've had some very bad underwriting cycles. But about half the market now, yield, for example is in the BB tier, which is the highest quality tier where you have exponentially lower default rates than you do in the CCC tier.

So, that high yield bond market really is not of a quality that you've seen in the past. Leveraged loans in the last year and a half have started to go sideways. Because the origination standards haven't changed when it took off some regulatory controls, they had leveraged lending guidance and said they'd issued in the aftermath of the crisis and a lot of reform initiatives taken. But that rules leveraged lending guidance, it was basically knocked down by the GAO and the Republican Congress as being not a rule in effect. And therefore, all of a sudden, you saw a breakneck pace of leverage loan origination back in 2018, when the Fed was tightening, so it was a hot asset class.

So, there are some pockets of excess right now, but nothing like the past. But the reach for yield element is just when you get down to where, for example, high yield par with a coupon at 6%. You go back in time, 90-Day T-bills were 8%, like in 1989, it's a starvation for income that does create a reach for yield, that usually does mean you're taking on more risk than you should be relative to what you're getting paid. But if it's the only game in town, you have to invest somewhere, because if the market blew up in credit and you were in equities, it's going to be a lot worse over there. That's price risk. At least you have cash on cash reinvestment returns, which allow you to build portfolio value, you just maybe not getting paid accurately for the risk you're taking. But that's the case everywhere you look, it's the lesser of two evils in many cases.

But on the issue of pension funds, pension funds have a huge need to pay out money every day. They're paying out to retirees, and that takes cash flow. And that takes income and therefore, where do you find that? You find it in various credit asset classes. And that's when you start to get over your skis in terms of the level of risk you're taking, versus what you should be doing prudently depending on the nature of the portfolio's risk parameters. It's a difficult choice. And there's a lot of new products out there that are coming down the pike.