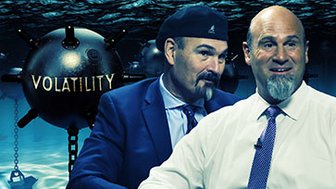 Jon and Pete Najarian, co-founders of Investitute, discuss how algorithmic…

Despite the strong recent employment numbers, is a labor crisis lurking? Art Bilger walks Real Vision's Alex Rosenberg through the four variables he sees converging to create a potential jobs crisis. He also explains why relying on traditional employment metrics can be misleading. This clip is excerpted from a video published on Real Vision on June 20, 2019 entitled "Behemoth Builder Warns of Looming Jobs Crisis."

ART BILGER: We're sitting with millions of people who are either not counted or are considered to be employed, but they're not fully employed.

Working Nation is a not for profit media enterprise to educate the people of our nation as to what I believe is the most significant issue we face. And that is a potential massive structural unemployment. But then the center of the bullseye of our mission is to then educate people across this country as to where the jobs in the future will be. And what are the mitigating strategies and solutions. And I really do believe this is coming on much faster.

And there's clearly more understanding today than when I first started thinking about this, it started coming together might have five and a half years ago. But I'm still amazed at how little understanding there is. But also, so few people are really talking about solutions. And so, the two words that are associated with Working Nation to the greatest degree and pretty unique is one, solutions. And two, storytelling.

The slope of the curve of the change in jobs and skills when measured against time has never been so steep. And my belief is we can't wait around for conferences and white papers to educate the people of this country. And in today's digital world, in particular, the power of storytelling is very powerful.

ALEX ROSENBERG: So, let's start with the problem as you see it, I guess, where in your career, did you start to be aware of the what you call it the potential massive unemployment caused by technology? When did you become aware of that? And why did you think it was such a concern really?

ART BILGER: Well, it was really the entry into the Akamai world. And then my active involvement for a lot of venture capital type stuff after that. And I wasn't just a passive investor. Anything I'd invest in, I would play a reasonably active role. And so, I got a very good look at how fast technology was changing the world that we were living in. And one of the things being jobs.

And so, the fact that this all came together, it's not that crazy. I was watching it. But the other thing, and I'll add really the third leg on the stool, so I've talked about my media experience, I've talked about my technology experience. The third leg on the stool that helped bring this all together in my head was in 2002, Mike Milken came to me and asked me if I would invest in an online education company that he and his brother and Larry Ellison of Oracle were launching. And I looked at it, and I finally said to Mike, I'll invest, but only if I can go on the board and on the executive committee, because I have no idea if I'm going to make any money. But I want to learn about this.

And the reason is, I was already net thinking about the idea of education and technology. Because my kids were going to the finest private schools in Los Angeles, and five miles down the road, you can find a very different circumstance. And so, I was due to my Akamai experience, and so I said, okay, there are platforms out there that my kids are getting exposed to, others could get exposed to via technology. So, as I said, I was already thinking about it, Mike approached me with the first one. I did go on the board and on the executive committee. I was very actively involved and stayed on the board I think about six years.

I dropped off the board the week before we filed to go public, because I didn't really feel like being on a public company board. That opened up me to a lot of education technology investing over the years. So, it's really those three- media, technology and education, which really came together by head and started about five and a half years ago. But I've pretty much spent the bulk of all my time ever since then focused on it.

ALEX ROSENBERG: So, I guess the naive question would be, well, unemployment is lower than it ever has been before besides maybe World War II. So, what's the problem that you see about the problem looming about unemployment? And then how bad do you think that could cultivate?

ART BILGER: First of all, the numbers you're referring to are totally misleading. They're not representative at all. The workforce participation rate is at one of the lowest levels that it's ever been in. And if you're not a participant, if you haven't looked for a job within some period of time, you are not counted in the denominator. We're sitting with millions of people who are either not counted or are considered to be employed, but they're not fully employed.

That individual who used to work 40 hours a week on some assembly line. And all of a sudden, that assembly line's gone, and now, they're working 20 hours a week driving Uber, or whatever, they are considered employed. And so, the 3.7, or 3.9- I don't know what number they're talking about now, totally misrepresents what the reality is out there today.

ALEX ROSENBERG: You're concerned more around automation and assembly line jobs, these kinds of- even the jobs of drivers with driverless cars, is that what's causing that slope of that curve to be so high?

ART BILGER: There are really four variables coming together at this all at the same time like never before in history. First is globalization. Okay, globalization is good in terms of demand for product, but also you got workforce out there that becomes available. Second being technology. And we've talked about artificial intelligence and all kinds of other technology. Third is longevity. If we keep people alive longer, you're keeping units of labor in the workforce or available for the workforce for much longer. And then the fourth variable is broken education. Particularly when you consider education, given the other three factors that are having such dramatic influence.

And so, it's those four things coming together like never before in history, is what underlies, I believe, one, the slope of the curve. And the two other things I want to highlight in terms of what really motivates what we're doing. This time, it's about the heart of America. And yes, it's also about the bottom 20%. But this time, it's also about the heart of America. And the two examples I've used for years is the driverless vehicle. I've been using that example for probably over five years.

I think driving for living is like the number one job in 32 states in this nation. These are middle-class jobs. And I don't know if it's five years, or 10 years, or 15 or 20 years, but those jobs are going to be disappearing. The other example I've used for a very long time, because it's an area I'm very deeply involved in, is how a marketing department of 20 will become a marketing department of two because of data and analytics. And those eight jobs disappearing are excellent, white collar, middle class and upper middle-class jobs in New York, in LA, in Chicago and Delaware, throughout the country.

And data and analytics is literally going to have that type of impact on so many different, I believe, there won't be an aspect of business, government of the not for profit world that isn't driven by data and analytics. That's the bad news in terms of jobs being lost.