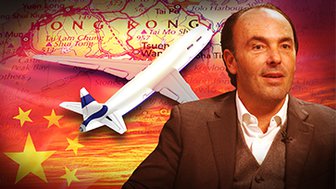 Mohamed El-Erian, chief economic advisor at Allianz, talks with Larry McDonald, author of "The Bear Traps Report," about the political problems that face Europe and how the corresponding risks might affect global markets. This video is excerpted from a piece published on Real Vision on April 19, 2019 entitled "The Big Regime Shift."

MOHAMED EL-ERIAN: If you look at the challenges facing the ECB, they're times 10 what the Fed faces. Europe, for me, is the most vulnerable segment of the global economy, this year and next. They are approaching what I call stall speed.

LARRY MCDONALD: OK, so look at Europe. Mr. Draghi is leaving in October. This is Mario Draghi, Mr. Everything-it-takes Draghi. And we have, Ms. Merkel's potentially on the way out. So the glue of Europe, that Angela Merkel, that foundation that's held everything together, is potentially leaving, whereas the Salvinis of the world in Italy are strengthening.

We have political forces in Europe that are much more evenly distributed than centralized strength of political force. If you think about the next head of the ECB, might we have a ECB head that maybe is more supportive of populism in the south and supportive of deficits. Or might we have a more Austrian-looking Schauble type. Schauble would never be in that role, but he's the former Finance Minister.

But that thinking of austerity, that's isn't that the key to this? Where, if you look at the next head of the ECB, and that ECB balance sheet. What are your thoughts on which way it might go?

But think. Think. Go back to the Patriots.

LARRY MCDONALD: OK. What makes the Patriots such a powerful team? And then compare it to Europe. They have a number of very strong players that you can rely on. Their teamwork is great. And they're very well-coached.

Let's look at Europe. The five major players in Europe are all having problems. UK, with Brexit. France, with the yellow vest protest against Macron. Germany, going through a major-- as you mentioned-- leadership transition. Spain, going to an election where it's not clear where they're going to have clarity. And Italy, a new government that's trying to find its way around.

So the first thing we say about this Patriots in Europe team is that the major players are problematic. But you say, don't worry, I have teamwork. What teamwork? Europe is not functioning.

You say, that's OK. The coaches are there. I have Belichick there. Well, you pointed out, Draghi is leaving. And Merkel's leaving. Which coach is there? We don't even know what the coaching staff is going to look like at the end of this year.

LARRY MCDONALD: If you look at, now, the ECB has been very lucky. 'Cause with the Fed, you stayed off the radar screen.

LARRY MCDONALD: But if you look at the challenges facing the ECB, they're times 10 what the Fed faces. And that's before you look at the transition. Their economy is slowing rapidly. You've got dreadful PMI numbers out of Germany, dreadful.

MOHAMED EL-ERIAN: And Germany's beta is so high to emerging markets and to China. In other words, because they're such a large exporter. So it's fascinating that you can have a man like Mr. Draghi and the ECB, do so much balance sheet. But at the end of the day, this trade war with China, a strong dollar weakened EM, in China.

LARRY MCDONALD: For me, it's not a surprise. Because balance sheet operations are like painkillers. Europe is structurally impaired.

We have real issues in terms of competition, productivity, et cetera. They need surgery. They need the sort of surgery that Germany went through, call it, 15 years ago. Before the labor markets, et cetera.

You go to the surgeons, and the surgeons can't agree. So you go to your doctor. Doctor says, fine, I'll give you some painkillers. Because I'm just got to help you through a short-term period until the surgeons are ready to deal with your structural impairment. And you know what?

They can do it. They need the political will to do it. You come back, and you say, it hasn't happened. I say, OK. So I gave you negative interest rates. Let me now give you more balance sheet. So I'm going to double the dose. And we go through this repeated game a few times.

And a couple of things happen. One is, the medicine becomes less effective. Two is, you start worrying about the side effects. What's negative interest rate doing to my banking system? What's it doing to my ability to provide long-term financial protection products? Retirement, insurance?

MOHAMED EL-ERIAN: So on that, the recent comments, public comments by central bankers in Europe, are starting to question negative interest rates.

MOHAMED EL-ERIAN: Is this a real shift?

LARRY MCDONALD: So I think it is. I think they've gotten to realize what I call the Bernanke equation. Benefits, costs, risks. And you risk undermining-- and that's why people say, ironically, instead of encouraging people to spend more, you encourage them to save more. Because they can no longer rely on pooled vehicles for long-term savings. And I think that that's the realization, is the medicine is less effective. It has side effects.

Now, the good news is that the surgeons just need to get their act together. Because we know what the surgery looks like. We just need them to be able to be willing and able to intervene. And they're able, but not willing, as yet.