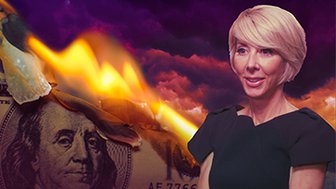 Howard Morgan, co-founder of First Round Capital and one of the original members of Renaissance Technologies, talks with Grant Williams about how high-frequency trading and algorithm-based investment strategies have distorted traditional price discovery in financial markets. This clip is excerpted from a video published on Real Vision on March 22, 2019 entitled "Failure as a Forerunner to Success."

HOWARD MORGAN: Markets in general move down faster and sharper than they move up.

In the markets, there's something known as the wiseguy effect, which is if you have an algorithm that works and other people start figuring it out. I think one of the secrets of Renaissance is that it's not a static model. It's not they built the model in 1989 and they're still trading that model.

It's every month, there are changes made. There are new signals put in, signals taken out, new awareness of what's happening. And most other people who build models and build systems have one thing. They're one trick ponies. And that lasts for a year or two years, and then it goes away.

There are very few groups, some like Two Sigma maybe and D.E. Shaw that have the discipline to continue to evolve their models constantly, as opposed to simply saying, oh, I've got something that works. And then all of a sudden it doesn't work. And they don't quite know why it doesn't anymore.

GRANT WILLIAMS: So what worries you, though? When you look at this thing and things trouble you, what's the basis of that?

HOWARD MORGAN: I think there's too much-- because what has happened is the algos have acted as an amplifier.

HOWARD MORGAN: So price discovery, in general, comes from information coming into the market. And something, usually humans up until recently, saying, oh, Apple's earnings are higher than we thought. We should go buy Apple.

Or Apple earnings are lower than expected. We should sell Apple. And that causes some price discovery. And they trade 100 shares or 1,000 shares.

Now what happens is the few people who make that decision are then followed on by algos, which dramatically amplify the moves. So the volatility and the depths of moves in any direction has been greatly exaggerated. And that's not good for the market. And it's certainly not good for individual investors.

And that's why you get John Bogle correctly telling people don't do this. This is not for amateurs. And I think having algo trading these 50%, 60%, 70% of the market is not a great thing.

GRANT WILLIAMS: But what's been interesting to me is to watch the rise of algorithmic trading against a backdrop of massively declining volatility, which is what we've seen. And a lot of that, I guess, is because we've had this straight up bull market for 10 years.

GRANT WILLIAMS: And that, for me, is someone that doesn't know anything like what you know about this stuff. That's what concerns me is what happens when the momentum shifts and the market's path of least resistance is down as opposed to up. How do these momentum chasing strategies affect the market on the way down?

HOWARD MORGAN: Well, I think markets, in general, move down faster and sharper than they move up. I think we saw in the few days and weeks after the Trump election, and we saw this last December, that the normal trend followings did terribly. Most of the Quant funds did pretty badly last year because they didn't realize that if they were built in the last five years, on five years of history, they were in a constant bull market.

And those models are not good enough. You need things that understand that markets don't just go one direction. And so they all got killed last year.

GRANT WILLIAMS: But we've had this period of entire trading desks that have never seen down markets, haven't seen interest rate hikes, haven't seen any of this stuff. And yet the data, to your point, is data going back 40, 50, 60 years, really granular data that suggests that there is a whole other world that we haven't seen.

HOWARD MORGAN: There is. And the best players, the Renaissance, Two Sigma, D.E. Shaw have data going back that far and run their models in both up and down markets and try to see what's going on. And the young people who come by my office, perhaps to me to see their Quant funds, which I do on a regular basis, come by with two years of data and say, look, I've got something that works.

And then I have to tell them, well, are you sure it works? First of all, let's try the following. Rerun your simulation, but put a random variable in on whether you're filled or not on your orders. Let's say you're only filled half the time. What happens?

And they do that and come back and say, well, we lost-- because that's what happened. Because we tell them to start trading real money. Then they lose money. They say I don't know why I lost.

And I say, I do know why you lost, probably. You probably didn't get filled. You probably had more slippage than you expected. All of the real market things that screw up somebody's wonderful little algorithm that works in theory and on pure data, where you get every order you want and so on. That's just not the real world.

GRANT WILLIAMS: But it's funny, isn't it? Something as simple as not getting your order filled can screw one of these things up completely.

GRANT WILLIAMS: And these are everyday occurrences. Not metaphorically-- these are everyday occurrences. You know, I'm always amazed at some of the models that I've heard people talk about are so simplistic and so reliant upon a very defined set of variables that we've really only seen in the last three, 4, five years, that it almost feels like it's dangerous to allow these things to go anywhere near the market. Not just for the people who've staked them, but for the markets themselves.

HOWARD MORGAN: Well, I mean, I think it's always good for the market to have more players, more participants. And so I like that part of it. But it's definitely true that they don't have an understanding of the real market dynamics and the fact that if they found an anomaly, probably a few other players have found it, as well, and may get those orders faster.

The other thing that I find is that they don't understand the importance of their time horizon. Markets are not quite a zero sum game. Because when a high speed Renaissance model sells a share of stock to Warren Buffett, and it goes down in 20 microseconds, Renaissance has made money on the short side.

And if goes up in 20 years, Buffett's made money. So both can win. It can be win-win if the time horizons are different.

And the first question, really, I ask about for these people is what time horizon are you trading? Are you trading microseconds, milliseconds, intraday, weeks, months? And the further out you go, the harder it is to build good models.

And the exciting thing about Renaissance is they built high speed models and Medallion, which is relatively short-focused. And they built the Renaissance, the institutional equities fund, which is multi-year focused and have done successfully at both ends of that spectrum.

GRANT WILLIAMS: So if we free ourselves from the bounds of capitalism, is there anything that you would look to do to maybe contain the power of these machines given where we are in the cycle?

HOWARD MORGAN: I don't know. You know, the truth is that we've gotten rid of some of the worst excesses, the portfolio insurance kind of things that exacerbated the '87 crash. And I think that having the models there does really provide more liquidity to the markets.

So that when people want to trade, I do think, that some of the new efforts to make sure that there's a level playing field in terms of people getting an edge by being three meters closer to the trading volumes and that microsecond level stuff, I think is good. I think that would be a good thing. And I know the US market regulators are thinking about.