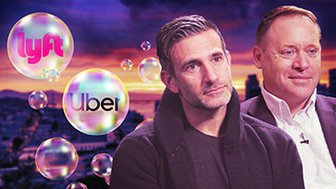 Jon and Pete Najarian, co-founders of Investitute, discuss how algorithmic trading and passive investing could exacerbate market meltdowns in this portion of a conversation with Tony Greer. This video is excerpted from a piece published on Real Vision on April 9, 2019 entitled "The Market Monsters' Momentum Shift."

JON NAJARIAN: The only way you can hedge that is with your ego, because there's no way you can stay up with it. First of all, the XIV failed because it was built to fail. Honest to God, Tony, that was the dumbest product and--

PETE NAJARIAN: To be blunt.

JON NAJARIAN: Credit Suisse the rest of the guys that put that thing together. So I mentioned this to a friend, Nancy Davis, over at quadratic. And I said, Nancy, when we saw this thing, I said then-- and I continued to say through the meltdown of it, when it went from 99 or wherever it was to basically 6 in one day, when it lost 90% some odd of its value, I said, the only way you can hedge that is with your ego, because there's no way you can stay up with it. No way possible you could stay up with it. I'm not against leveraged ETFs. I know this was an ETN, an exchange traded note. But I'm not against leverage with ETFs or ETNs. But something like this that's a derivative of a derivative of a derivative-- What could go wrong?

JON NAJARIAN: What could go wrong? I mean, crazy, stupid stuff. So will there be more like that? There'll be more moves, like February of 2018, I think. We saw one in December. It was about as ugly as I can remember, going back to the 2008, 2009 debacle. But we'll see more. Quite frankly, we'll see more, because what Pete mentioned about combination of artificial intelligence, or AI, and high frequency trading. And again, I'm not demonizing them. But I would say that, at a very minimum, the SEC and FINRA should be fighting for putting the uptick rule back in, because the uptick rule worked for-- whatever-- 80 years from the time they put it in.

And then when they repealed it, they said, well, more or less, with 40 disparate different markets, how do you know what the last uptick was? The same computers that make high frequency trading possible make it possible to know you can't sell on that, cause it's a lower tick than the last traded price. So you can't sell there if you don't own it. If you own it, you can get out anytime you want. If you don't own it, you can't just pound it into the ground. But like I say, when you've got artificial intelligence and algorithms that are built to, OK, every time I get hit on the bid, lower my bid and lower the quantity on my bid.

So what am I doing? I'm withdrawing liquidity on the side that needs it. Instead of adding, I'm pulling back. When you were a market maker, you got special margins and all the rest for being there and guaranteeing that you would make a market as the market was falling apart. Might not be a great market, but you're guaranteeing to be there. Otherwise, they'll take that market maker designation away. We don't have that anymore. And they could go a long way towards dealing with it, putting the uptick rule back in for securities.

PETE NAJARIAN: And I think that's the biggest problem is the fact that we have allowed this to occur where-- I catch a lot of flak-- so does John-- because we bring this up a lot. The uptick rule being one, and the algorithms are not market makers. When you make a market, if you have a bid, that means you absolutely have an offer available and vice versa. And the fact that these computers are not, the AI is not-- they're not in those same restrictions. They are just going one direction off of one word from Jay Powell or President Trump or whomever. It's one word, and that's all they need.

And then that's when you get these just crazy moves. And you brought up, well, what do we think going forward? I would think that there is enough going on in the world, and we've got a pretty interesting guy sitting in the White House who, in terms of how he communicates. And because of that, I think that no matter who it is going forward, because of the social world that we live in and everything else, I think we are in a more volatile space. Now, I say that on a day where we're seeing volatility actually has come down to a reasonable level these days. But I've always lived by the thing-- John has, too-- the old adage that, you buy when you can, not when you have to.

So there are times to protect yourself. And then there are times where you can let some of that go. And I just think the range is different than it was. Like you mentioned, there was an eight to 10, maybe even call it a eight to 12 range for quite some time. And now, I feel like we're probably in a different range. And it's probably something closer to a 12 to 16 under normal circumstances, but we can very easily get right back to 22, 24, 25 if enough different pieces of the puzzle come out.

PETE NAJARIAN: We could easily be 25.

And that is, what is the disconnect between the SEC not noticing the distortions that they create, not noticing the underlying danger of having derivatives built on derivatives built on derivatives, and you and I-- you guys and I both know that we're probably in for a day of reckoning at some point-- you know what I mean?-- with those products being stacked on top of each other. What is the disconnect with the SEC? Do you think that they're just happy to see the volume trading? Do you think that they're looking the other way on a set of high frequency funds that they don't want to investigate? Or what do you think the disconnect is? Can you speak to that at all?

PETE NAJARIAN: I think it's that they don't fully understand it. I think that they try to look at things after an event happens, like we all would. I'm not saying that I have this clairvoyance and I can see out into the future. But they're always-- what do they say? Fighting the last war? So that's what they're looking at. So in the case of the flash crash in 2011, it did exactly what we said.

The algos were withdrawing liquidity right when you needed it and lowering prices. And when they all do it in concert, you get just a sharp drop to the downside like we got, and then a very sharp rebound when the money comes back in to cover. And then some of the guys that are late to cover are now short covering and chasing that thing up. So you get that incredible V-shaped bottom that you had in 2011.

JON NAJARIAN: So I mean, without having that clairvoyance that I mentioned, since they lift most of those stops into the last few minutes of trading, I'd say that's when one of the big next things is going to happen. So when you replay this, whenever that happens, you'll say, boy, I think John was really right about that. Look at this thing. It fell 2,000 points from 2:50 to 3 o'clock because there were no circuit breakers to stop it.

TONY GREER: Exactly. Well, we're going to have some sort of crisis, because the growth of passive management has become astronomical. A lot of the biggest funds, clearly, are owners of the five biggest stocks in the market, the FANG stocks, et cetera. And my biggest fear is that if they all turn south in one day in major quantities or in one week, et cetera, and having major magnitude moves lower, then there are going to be a lot of sellers and lower prices are probably going to bring out more sellers. So that's my concern with the markets. Do you guys agree with, that the passive investing's going to be something that leaves us--

JON NAJARIAN: The passive investing, yes. My only pushback at all is I realize the FANG names really are a lot to do with the market. But I think sometimes, we have focused so much on those names. And I realize market cap and everything else. I get it. I mean, they're huge movers of the S&P 500, and blah, blah, blah. But I still look at a lot of the other side of, well, there are Microsofts out there. There are Oracles out there. There's Intels out there. And there's all kinds of different industrial stuff. I mean, so I oftentimes have pushed back at the idea that it's just FANG. I get it. I totally get it.

But I think, underneath that level of FANG, there are some great support areas, that I think there are many companies that are just still overlooked that they do have their moments where they're going to have a six month run that everybody's like, oh, my goodness, have you seen this? And right now, we're sitting in the middle of one of those, where everybody is still focused still, I think, on the FANGs. But if you look at old tech right now, I just came up with, I think, 15 different tech names that are up over 20% plus this year alone. And none of those are FANG. So I think that part of it is-- what's interesting is that FANG gets a lot of the publicity. And they should, because of what has happened and how big of a portion they are. But there's other stuff out there.

JON NAJARIAN: Yeah, I think there's a little bit more of a broad movement out there than gets credit for. I mean, biotechs had a great run and nobody's even talking about them.

JON NAJARIAN: They have had a great couple of weeks. I mean, it's interesting how there's-- and I think that's the market that we've been in for probably, what, two years, this rotational market where, who's leading? Who's going to bring us next? I mean, pharma names. Merck's hitting new highs, Lilly's hitting new highs. And nobody talks-- you look at TV, you won't see it talked about. It's not talked about, because everybody said, hey, did you see Facebook? And the latest thing, the investigation, or whatever it might be that day-- Apple, Tim Cook, whatever it is. But there's a lot going on in other places.