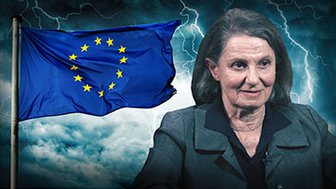 Danielle DiMartino Booth, chief strategist at Quill Intelligence, joins Ed Harrison to discuss her macro-centric thesis that a recession is coming. DiMartino Booth talks about the global dollar shortage, how the United States might not be on as solid footing as the market expects, and where she sees the recessionary inflection point on the horizon. This clip is excerpted from a video published on Real Vision on July 11, 2019 entitled, "The Ugly Truth about the Federal Reserve."

DANIELLE DIMARTINO BOOTH: I like to think of big sell-side macro economists as saying, well, the car is running, so it must be fine. Well, they're just looking at the headlines. If you look underneath the hood, there's leaks here and tubes breaking there. And the engine's about to break down. And your transmission's about to fall out.

So at the beginning of the year, Quill Intelligence came out with its three big predictions for the year. One of them was that Germany would go into recession. It looks like we're just about there. The other was that the 10-year note would get down to 2%. People thought we were absolutely nuts. And the third one was that despite all of this, we saw the dollar strengthening.

And we're standing by all three of those calls for the remainder of the year, despite the fact that our targets have largely been met, mainly because if you look outside of the United States, there's every reason to believe that the United States will continue to be the most attractive horse in the glue factory, as my old boss Richard Fisher used to say.

So on a relative basis, we've talks about the European Central Bank relaunching stimulus. I think that Japan would certainly follow them. Australia is in a cutting move after an expansion that's lasted almost 30 years, because China's slowing to the extent that it has.

So if negative rates are going to be getting more negative, then there will be flocking to the 10-year treasury at the same time that we know that there aren't enough dollars out there. There's simply a dearth of dollars, a dearth of dollar funding, which is going to have investors continue to clamor to get their hands on greenbacks.

So a lot of these things run cross-current to one another. But the overarching- I haven't bought gold in years. But a few months ago, I finally stepped back and said, we're not going to be decoupling forever.

Everybody on Bubble Vision who says that the United States can indefinitely decouple from the rest of the world, I'm like, I've heard that somewhere, like a decade ago. And it didn't work out too well then. And I think that that's why we've seen gold pushing six-year highs here.

ED HARRISON: So let's unpack that. That's a lot in terms of the US economy, because that's where the rubber hits the road in terms of what you're talking about. And you have a bevy of stats that you look at that traditional macroeconomists aren't getting into the weeds, into these places. Tell me, what are the things that are the most salient for you in terms of where we are? Are we actually on the cusp of recession?

DANIELLE DIMARTINO BOOTH: I think that the US economy is definitely sliding into recession. And you mentioned where the rubber hits the road. I like to think of big sell-side macro economists as say, well, the car is running, so it must be fine. Well, they're just looking at the headlines.

But once they hit that sixth consecutive month of year over year declines- we are a nation of consumers. We are what we buy. And if there are fewer trucks delivering whatever Jeff Bezos is selling us, then that is a sign that a consumption-led economy is slowing.

So after that sixth consecutive month, Cass came out and used the word contraction, that they see a contraction in the third or fourth quarter of this year. And I can't disagree with their assessment, given the fact that even the labor market has started to show some signs of serious weakening.

ED HARRISON: Tell me about the labor market in particular, because one of the things that I find interesting is the concept of revisions. Two things on that. One is that real time revisions that we see. Oh, by the way, the last two months, we revised them down. But also then the benchmark revisions that we have now. So in some senses, we're not really seeing the actual numbers that we will see once all the data come into play.

DANIELLE DIMARTINO BOOTH: And to your point about benchmarks, I think we need to pay particular attention, because for a few years there, we could just ignore them, because they were being revised upwards. But that hasn't been the case in recent years. I wouldn't expect that to be the case in the latest batch that we're expecting.

And on top of that, one of the first things that they teach you at the Federal Reserve is that lags matter, which we know they do, and the tightening that was unleashed that ended in December, it's still percolating its way through the economy in various forms, but also that backwards revisions really tell us what inflection points are.

DANIELLE DIMARTINO BOOTH: That June non-farm payroll headline, it was fine. But we had what the Fed considers to be a moment of truth, three consecutive months of downward revisions to the prior months. That tends to tell you that the unemployment rate is heading up and that we've seen peak labor growth if you start to see these backward revisions in real time.

We're not waiting a year for the benchmarks. Were seeing them in real time right now, three consecutive months running.

ED HARRISON: Yeah, so let's think about this, the 10-year treasury in that context, because what you're talking about is a slowdown in growth in the United States and potentially a recession coming onto that.

So what does that mean in terms of your macro thesis of the treasury from here? Because we're already near the 2% level that you talked about earlier? Do you see that going even lower? We spoke to Gary Shilling. He's talking about 1%.

DANIELLE DIMARTINO BOOTH: I'm good friends with Gary. And I read some of his work. But if you think about what some of the prior lows have been in this cycle, 165, if we're actually going into recession, and we've bounced off these lows before when it was just kind of a dress rehearsal, oh, it's just an earnings recession. We're going to be fine. We're going to come out of it not once but twice.

And again, the major differentiating factor between those earnings recessions and now is that we have residential construction that is going down at an 11.2%, rate the latest read over the prior year. That was a huge tailwind during the industrials recession of '15 and '16. We don't have that as an offset.

And that tells me that there's no reason in the world, if a larger proportion of the US economy is slowing, that we wouldn't break through that 165 and keep going back towards 1%, especially, again, given what's happening off our shores.

ED HARRISON: Right. So actually, I wanted to pivot to other things than the US economy when you said off our shores. Tell me about that. What is actually happening? You were talking about the second and third largest economies, Germany and China. What's happening there?

DANIELLE DIMARTINO BOOTH: Well, they're exporting powerhouses. And there's a symbiotic relationship between the two of them.

So you and I were speaking before about the fact that you can't urbanize an entire country twice. So China's kind of checked that box. They won't be able to pull the entire world economy out. If you look at worldwide car sales in 2008-2009, it looks like just a little blip. And then off we went to the races.

That was largely a reflection of Chinese strength. That was also seen in Germany exporting millions and millions of cars. BMW, Mercedes, Volkswagen, these massive brands rely on China as an export market. And that is simply not there.

And we're beginning to see a trickle down effect. We're seeing things like the beginnings of rising unemployment in Germany. And Germans are beginning to talk about fiscal relief and spending more. They're the most prudent people in the world. They do not want to take debt on. But they know that their economy's going to be needing it and soon and that there is no way to turn away from the fact that the bulk of their auto manufacturing is the internal combustion engine when their main consumer, China, has changed over to electric vehicles.

So these are structural moves that we're seeing here. And there's no reason to believe that, given the amount of investment that's been made by these companies in the United States- think of BMW in the south. Think that the South Carolina presence of so many of these companies, Kentucky. A lot of it used to just be Detroit and the Midwest. But foreign, especially German, manufacturers' presence in the United States has been a huge benefit to the entire manufacturing sector.

That's going away. It's not disappearing. But it's definitely decreasing at a time that we're seeing retail sales, retail car sales in the United States also on the decline for the first six months of the year. Everything's being flattered by fleet sales. But don't buy that. Don't buy it when Fiat Chrysler comes out and says, we had a great month. By the way, one in four of every car we saw was fleet. That is not a reflection of a strong US consumer.