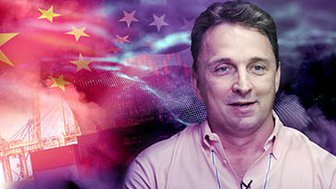 Russell Clark of Horseman Capital explains to Roger Hirst why…

Ian Bremmer, president and founder of GZERO Media and the Eurasia Group, tells Vincent Catalano why the pressure to save the economy has landed on central bankers. Bremmer points out the inefficiency of the current monetary policy regime "backstopping" financial misbehavior, and explains why that is consonant with a general loss of faith in traditional institutions. This clip is excerpted from a video published on Real Vision on August 2, 2019 entitled "A Geopolitical Recession."

IAN BREMMER: I think that if you want to talk about the economy, and not just how the market's doing, but the whole economy, you're talking about human beings. Central banks cannot be the saviors of that.

IAN BREMMER: I don't think that the central bank is the savior of the economy, I think that you have a lot of concerns that a lot of people are not benefiting from the economy. Ultimately, economies are built on people. When you have an environment where a lot of those people are left out and are no longer viable or vital to that, they're no longer be-- and you don't measure their inputs, they get angry, and that undermines the system. Capitalism doesn't work for people that don't have capital. Fundamentally, most Americans today don't have capital, therefore, they're oriented towards things other than capitalism.

I think that if you want to talk about the economy, and not just how the market's doing, but the whole economy, you're talking about human beings. Central banks cannot be the saviors of that, but I do believe that central banks continue to operate largely as they have through the post-war globalization period. In other words, they're run mostly by technocratic economists who share a skill set. They're very aligned with each other. They are largely independent from the political figures that are being elected to run nominally, those governments and in that regard, yeah, their tools to respond to a crisis maybe more limited because interest rates are low now. They can't go that far.

IAN BREMMER: Their balance sheet is problematic. Although, when we talk about the balance sheet, everyone talks about sovereign deficits, people don't talk as much about the assets on the sheet. What these government's own. We do when we invest in corporations, I don't understand quite why we don't-- I have no problem with deficit spending in the US if we're investing in things that will bring a return long term, like infrastructure and human capital, the problem is we're not. That makes me feel like the US economy is losing some of its strength.

VINCENT CATALANO: Do you feel though in terms of institutions writ large, the concept of institutions, of institutions being there as the backstop for bad behavior, that's the point that I'm trying to get to with that. In other words, I had a debate with the former president of the Minneapolis Fed. The debate that I had with him was about the fact that central bank's actions backstop bad behavior or what would be perceived as bad behavior by many. Any thoughts on that.

IAN BREMMER: They backstop the existing system. The existing system has many excesses. If you're telling me that post-2008, we didn't do an awful lot to change the way banking worked, if you're telling me that some of capitalism is actually predatory and that indeed a lot of special interests, particularly in the United States, capture the regulatory process, that there's far too much money spent on lobbying, and that Congress people, upon retirement, join that and have to position themselves to ensure that they have future well-being and as a consequence are complicit-- those are very significant problems. I would not put them at the feet of the central bank. I'd put them at the feet of a system that is no longer feeling like a representative of democracy. That's a problem.