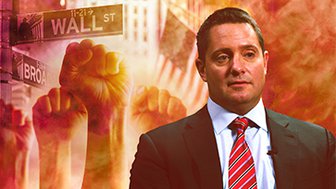 Carson Block discusses how greed works as a driver for…

Dan Oliver of Myrmikan Capital and Simon Mikhailovich of the Tocqueville Bullion Reserve sit down with Real Vision's Grant Williams and discuss the process whereby history appears to "rhyme." Oliver and Mikhailovich provides some historical perspective to explain how we got here, and discuss how history might shed light on the problems of tomorrow. This video is excerpted from a piece published on Real Vision on August 20, 2018.

DAN OLIVER: And the whole idea behind savings is that by not consuming now, by consuming it later, by saving it, it grows, and so you consume more in the future.

There are really two aspects that I'm thinking about. And one is-- we talked last time how the financialization of the economy creates big, vertically integrated efficient structures which devalues the work of labor. Because the whole focus becomes not on flexibility and economies of scope, but economies of scale. And so the more simple you make any given task, the cheaper it is to do. And so you get a huge divergence in wealth. The owners who own these structures, and then everyone else working the Amazon warehouses that are servicing it, or the Duane Reade, or all those big companies that have very simple tasks.

And this results in a few things. Once you've become an employee, you have very little stake in the capital aspects of the country you're living in, or the structure. You have very little influence on where the country goes. In fact, Pliny the Younger in Rome talked about how Rome was ruined by the plantation. That Rome, similar to us, was a yeoman society. Little farmers, who had a little plot of land, and they were responsible for their own capital and their own production, they all got subsumed into giant plantations, where they were just, again, raw labor with no particular value.

The other aspect of it is that, what in my mind really underlies bourgeois conservative morality is this idea that people save. Right. You make your money, you have capital, and you could consume it right away. Instead you save it. And the whole idea behind savings is that by not consuming now, by consuming later, by saving it, it grows. And so you consume more in the future. And so underlying that, again, is this idea of growth, of individual savings, of individual capitalists saving for themselves.

And what you see, wherever you look in history, when you get hyperinflation, the individual finds it very difficult to save his capital. Either you have to be very sophisticated in the markets. But even then, you know, the markets are controlled by these big banks and all that. And it goes up and you buy, and then it crashes and you're scared, you get out. So you really get screwed.

And so if savings doesn't give you more, right, why not take it all right now? There's something called the Marshmallow test for little kids. And what they've shown is that-- studies have shown that the decades later, the better the kid does on the Marshmallow test the more successful they become later in life. Because they've internalized this idea that forgoing consumption and savings lets you consume more in the future.

Well, inflation creates the Marshmallow test in reverse. Right. You get the two marshmallows now if you eat it. If you wait, you only get one.

DAN OLIVER: And so of course you eat it right away. All the tendencies that underlay the bourgeois society of small capitalists saving for themselves and planning for the future get completely destroyed by inflation. And I came across an article in the New York Times from 1922 before the German hyperinflation rate turned into hyperinflation-- it was just sort of inflation the way we would understand it.

And it talks right there-- it says, the morals of central Europe are falling along with their currencies. And they quoted some Bohemian official saying, I used to save for a rainy day, but now there's no point, right? If I don't spend the 200 gilders and the ball today, I'll lose the ball and the 200 gilders, because then it'll disappear.

When you read about accounts, for example, of the Plague in Medieval Europe, the Plague shows up, and again, everyone knows they're going to die. So what do they do? They drink all their wine. They slaughter all their beasts. They go to the bar every night. They consume everything they have right away. And that's exactly what the Federal Reserve policies are doing to middle America, unless you are at the top of this asset bubble.

GRANT WILLIAMS: Well it's exactly right. And this is what I want to come on to. Because this is something you and I spoke about at length numerous times, this idea that there's no inflation, which, optically on the ground level there isn't, except in asset priced inflation. So the money has gone to the people that had money, because they have access to capital. And this has created-- with this phrase about the 1%, which has become quite a popular phrase in the last seven or eight years-- and this is nothing new. Again, this has happened all the time.

DAN OLIVER: Sure, sure.

GRANT WILLIAMS: But talk a little bit about how that separation of the 1% from the 99%, how that festers at times like these, and how that can ultimately play out.

Now there's nothing on Main Street, and there's a shopping mall with Walmart and, you know, these big box stores, where all the people who used to have a vested stake in their community and their schools and their society and their churches, all of a sudden they're just an employee of this big nameless corporation that pays them not enough even to live, right. So you start having--

DAN OLIVER: And on that point, J.P. Morgan recently, the letter said that the tax code should change to basically give people more money. He makes $30,000,000 a year out of the system.

DAN OLIVER: Most of them can't afford to live, which he recognized. And so don't reform the system, just give 'em some more money.

SIMON MIKHAILOVICH: Let's give 'em some more money-- the universal income. Let's replace all these programs. Let's just give people the money. This is a great idea. I think it's been tried with limited success success. It's described in other ways as, from everyone according to his ability, to everyone according to his means, which, given that I grew up in the Soviet Union, I was taught early on that that is the economic precept of communism.

This is what communism is, precisely, that everybody has the highest conscience to contribute whatever they can. And the society-- the response from the society is to give them whatever they need. This is the universal income. If everybody loves that idea, they should have lived in the Soviet Union. They would have loved it there. I mean, of course they never got to that point.

GRANT WILLIAMS: But why is it that ideas like that come back into fashion? What is it that brings that idea back?

SIMON MIKHAILOVICH: It's for the same reason-- everything else we're discussing. It's because people-- these people get-- this generation gets burned. Their children remember what happened to their parents. Grandchildren don't remember what happened to the grandparents, and they start doing the same thing over again. I mean, I'm just a little surprised that not 30 years--

SIMON MIKHAILOVICH: --after-- yeah, the communist ideas blew up so spectacularly they're being promoted again. I think part of the problem is-- and you and I have discussed it a lot, is that Marx, and Lenin to some extent, both put forth very cogent analysis, and very cogent criticism of the faults of the capitalist system.

DAN OLIVER: Of the banking system. I mean, it's not capitalism. This is not from our capitalist--

DAN OLIVER: This is capitalism as it's--

SIMON MIKHAILOVICH: Oligarchical capitalist system, that's right. And so that analysis, if taken separate from the solutions that they proposed, which were completely untenable and proven conclusively not to work-- how is it that banks have committed fraud on a scale--

SIMON MIKHAILOVICH: It's not an opinion they've committed fraud. They've paid $250-whatever billion dollars in fines--

GRANT WILLIAMS: Without admitting or denying any wrongdoing.

GRANT WILLIAMS: But, no, but that's important, right?

SIMON MIKHAILOVICH: OK. Well, right. They did not admit it or deny it, but they were accused of breaches of fiduciary trust and every kind of trust you can imagine. They paid these fines. Paradoxically people still trust their money to the banks.

SIMON MIKHAILOVICH: But that just completely destroys the moral fabric. And that is, again, something that happens in every-- the interesting thing about this discussion, that we are bringing these elements here is not to give people recommendations of this stock or that stock, it's just to give the sense that what's going on-- it makes sense.

GRANT WILLIAMS: Yes, it does. It does.

SIMON MIKHAILOVICH: I mean, a lot of people that I talk to-- I mean, they understand that something's not right. So the answer to your question is, it's the combination of alienation, of breakdown in time preferences, if people don't feel the future.

SIMON MIKHAILOVICH: Well, if we're talking Armageddon, why prepare? And so the activity changes. And then the people become powerless, and they feel powerless, and they lash out. And so when we eventually discuss where this all leads, I mean, the financial profligacy perverts the economic incentives of the real economy, which then perverts the moral fiber of the society, which leads to political consequences.