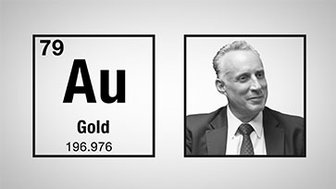 Rick Rule, president and CEO of Sprott US Holdings, talks about how gold behaves in a liquidity or solvency crisis. Rule argues that gold and gold stocks do not behave as we might expect when trust suddenly evaporates from a system after a traumatic financial event. This clip is excerpted from a video published on Real Vision on November 27, 2018 entitled "The Golden Portfolio Hedge."

RICK RULE: Although many factors impact the gold price, what has been most important for 40 years has been global investors' perception of the durability of purchasing power of the US dollar, particularly the US dollar as expressed by the US 10-year Treasury rate. Historically, when people were afraid, they went to gold, on a global basis, not just in the US. When people are afraid, they go to US Treasury securities.

At the beginning of the bull market in treasuries, the US 10-year rate was at 15.6% annually, if my memory serves me well. Currently, it's at 3%, having fallen as low as 1.78. Could the rate go lower? In other words, could the bond go higher? Perhaps it could, but the truth is aromatically, you're much closer to the end than you are to the beginning of that market. Why is that so? What's behind that number?

People inside and outside the US don't seem to understand the arithmetic of collective indebtedness in the United States. I'm not talking now about numbers that emanate from some old libertarian crank who works for a gold company. Rather, the Congressional Budget Office would say that, on balance sheet liabilities, just federal government liabilities are $21 trillion. For your viewer's edification, that's 21, with 12 zeros.

Add in state and local on balance sheet liabilities, off-balance sheet liabilities, which are entitlements-- you're looking at one-- a 65-year-old-- and beyond that, the net present value of unfunded pension liabilities, and the total collective liability in the United States is $200 trillion, according to the Congressional Budget Office. There, if you will, you have the denominator. The numerator comes from the Fed, who says that total private household net worth to the United States-- assets minus liabilities-- is $100 trillion.

The arithmetic is that we have a $200 trillion obligation with $100 trillion asset base. Yes, you can add back other collective assets too, but the truth is that both the balance sheet and the income statement of the United States don't justify America's standing as having the world's reserve currency, nor do they justify, on a risk basis, the yield on the US 10-year treasury. My friend Doug Casey says that the US dollar is the prettiest mare at the slaughterhouse. The fact is that the United States, despite its challenges, is, at least commercially, and probably technologically, the most innovative society in the world.

While we have problems, our currency is deeper and more liquid, in terms of securities markets, than other currencies around the world, including, as an example, the yen or the euro. The US looks good in a relative sense. I think that's why the US dollar has been so strong. The US economy is relatively strong compared to other economies. US interest rates have risen to the point where they're at least flat, in real terms, relative to other currencies, which would appear to be negative.

To me, a black swan is very much the way Taleb described it. That is, a circumstance that doesn't appear as being probable, or even thought of, an asynchronous event that tends turns out to be a momentous event. I think there are a few of them, with regards to security markets in general and perhaps, the gold and gold equity markets. The thing that gold stock investors, in particular, forget and to some extent, bullion investors forget, is that a liquidity crisis, in the near term, takes down all ships.

The sell decisions in a liquidity crisis are seldom made by the investor. They're made by the margin clerk. And in a context like that, everything gets sold, whether it has a bid or it doesn't have a bid. I remember, back in 1987, that stock market crash, which may be before many of your viewers' experience, but the truth is that the gold stocks held up for 24 hours. Then gold stocks turned out to be stocks, and they got sold off.

Then gold as a commodity got sold off, because people had debts that needed to be extinguished, and gold had a bid. In the very near term, when the gold bugs, who have sort of a proclivity for crisis, believe that their asset will stand them in good stead in a liquidity crisis, the truth is, at least in the near term, it doesn't stand them in good stead. In the intermediate term, of course, in a liquidity crisis, gold might be the ultimate liquidity. One will ultimately be happy that he or she owns gold, but in the face of a liquidity crisis, the performance of gold and gold stocks can be very disappointing.

One wonders about a liquidity crisis at all, given the fact that the world is awash in liquidity and we try and point out to Sprott's clients that there is a difference between liquidity, which the world has lots of-- artificially low interest rates, which adjust, the tax cuts in the United States that haven't been met by spending cuts. People tend to confuse the word liquidity with the word solvency, and those are two very different words.

When the issue of solvency comes into play and people are nervous about parking their cash with other people, when trust evaporates from the system like trust evaporated from the system in 2008, a solvency crisis becomes a liquidity crisis. In circumstances like that, in the very near term, the only thing that works is cash. I think the first thing that gold and gold-related investors have to worry about is the likely response of both gold and gold-related equities in the very short term in the event that we had a liquidity crisis.

A black swan that I think faces resource investors generally is the fact that the world-- particularly the US but the world itself-- has been what I guess you could describe as in recovery for nine years following the global financial collapse of 2008 and the beginning of the reformation, I guess it was, in 2009. In my experience, through four cycles, nine years is a very long economic recovery and there is a possibility that the recovery that we're in-- the recovery in economic markets, in financial markets, in all of those things-- could be long of tooth.

As a consequence of that, you destroy supply. That's very, very bullish for commodities, and that's occurred. The counterpart to that is that, after a nine-year bull market, we begin to fade, in terms of demand. You can afford, in a market, reduced supply if you have reduced demand simultaneously. One of the things that I think that investors in gold and commodities aren't factoring into the equation is the fact that the expansion that we've enjoyed for the last nine years is probably fairly long of tooth.

Two ugly black swans that people need to concern themselves with, I think, are the concept of a 2008-style liquidity squeeze, or simply, a good, old-fashioned recession. The white swan, if you will-- the thing that could go very right, that I don't think is recognized in the market-- is the fact that the bottom of the demographic pyramid worldwide, the 2 billion people in the world who are the poorest of the poor, are gaining ground, and they're gaining ground very rapidly.

This is a wonderful set of circumstances for humanity, but it's also a wonderful set of circumstances for commodities. When you and I-- Western people-- gain greater purchasing power, the goods that we purchase, the things that improve our lives, mostly aren't physical. They're services, or if they're not services, they're some little piece of technology from Apple that doesn't consume very much of anything. When the poorest 2 billion people in the world gain purchasing power-- and they're gaining it very rapidly-- they might increase their calorie count from 1,500 to 2,200. I'm not suggesting that obesity is a benefit, but it's certainly good for commodity prices.

They might change their mode of transportation from walking, to a bicycle, to a 50cc motorcycle, to a Toyota Hilux. They may trade in a thatched roof for a steel roof, or mud for cinder block. The point is, the bottom 2 billion people on Earth, as they gain extra purchasing power, their purchases are deeply commodity-intensive. The driving of the last bull market in resources can be attributed at least, as to 50% of it, simply to the urbanization of China and to the extent that the Chinese story is replicated, albeit in less dramatic fashion, in Malawi, in Myanmar, in Bolivia, that could have enormous impact on commodity prices.