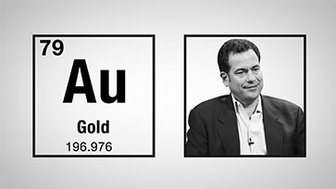 Danny Moses, best known for his trading experience through the…

Brent Johnson, CEO of Santiago Capital, and Luke Gromen, author of Forest for the Trees, sit down for a conversation on investing in physical gold versus gold contracts. Gromen argues that the demand for physical gold has far outpaced the demand for gold contracts because of China trying to defend the value of the renminbi. This clip is excerpted from a video published on Real Vision on February 11, 2019 entitled "The New Drivers of Gold Prices."

BRENT JOHNSON: I've been a huge gold advocate for a number of years. And usually when I talk, I usually talk about gold, mainly because I think I have a unique view on it to a certain extent. And there's plenty of people talking about equities and fixed income and private equity. And I didn't really feel like I necessarily had an edge there. And I felt like I had a little bit of an edge in the gold world.

But along those lines, it has surprised me how long it's taken. And based on a few things that's happened in the last 12 to 18 months, I actually think it's going to take a little longer. And I don't know if I've told you this or not, I think I mentioned it to you just briefly before we came on, but I actually shut my gold fund as of the end of the year. And it's a hard deal for me, to be honest, because I'm such a huge believer in it. But it was always a very small part of my business, less than 5% of my assets under management and less than 5% of my overall business. But I always felt like it was the most important part because I really think that when the time comes, everybody needs to own it.

But what a lot of people don't know is when you own gold in a fund structure, there's all these expenses that nobody knows about. There's audit. There's administration. There's tax. There's legal. And when I started, it was just the precious metals allocation for my current clients and I thought, as we get into a bull market, we'll be able to raise more assets. Well, 7 years into the bear market and we weren't able to raise additional assets. And with poor performance due to the gold price, we just weren't- the expense ratio became too much. And I really couldn't justify it.

And it's a hard conversation with clients, to be honest, because I've advocated it for so long. And at first, they thought I was saying, well, we should not be in gold anymore. And then I had to explain, no, we should still be in gold, that there's more efficient ways to do it than through this particular fund structure. I was always in an interesting position. And I'm interested to get your thoughts on this because I don't know what you think it's going to do right now.

But I was always somebody who said it's the hedge against everything else. We're not going to get rich owning gold. It'll hopefully save us when everything gets really bad. But it was never the play to make a lot of money. And so I was always one of the few people, at least I felt- and there's probably a few more out there in the gold world, who- if I thought the gold price was going to fall, I would say it was going to fall. And then people would say, how can you be a gold manager? How can you recommend gold but also say it's going to fall?

There's some contradiction there. And so I would have to explain that it's the insurance policy. You buy car insurance. You buy fire insurance. You don't necessarily want your house to burn down. But when you're in the investment world, people don't always see it that way. And so I tried to figure out a way that I could have that insurance along the way and protect them if this thing extended longer than I thought. And the reality, I wasn't able to do it. And so, eventually, I had to come to the realization that as much as I wanted to keep it open, it wasn't in the client's best interest to do it in that form.

LUKE GROMEN: Well, good on you for doing that. That's a high integrity move.

BRENT JOHNSON: But it's part of this business. And it's part of- people talk about skin in the game, to be quite honest, I'm embarrassed about it. I'm embarrassed that I wasn't able to get through the cycle. I feel like I should have done a better job. But the flip side is that I think if you always do right by your clients or try to do right by your clients, in the end, you'll be okay.

But I think it's an interesting time because I actually think that gold is going to go lower over the next couple years. And I know that that's a little interesting, again, for a gold guy to say that. But you and I have talked about the dollar a lot. And I've maintained for a while that eventually the dollar and gold will go higher. But I think that in the short term because of the dynamics of the way the dollar's how I believe is going to play out, I actually think I'm going to get an opportunity to get back in, maybe even at a better price.

But I'm curious what you think about gold and the dollar in conjunction. Do you think gold's going higher here? Do you care? Is it just an insurance play for you?

LUKE GROMEN: No. To me, one thing I've said a number of times and I still think is true is I don't think gold is a real market. And I don't think it's been a real market since probably 2013. There were a number of things that happened beginning in early 2013 shortly after Cypress announced that they were getting a bailout. And they're going to get $10 billion in loans and that they were going to write a promissory note. And they were going to also shed or sell 10 tons of gold.

And it was odd. I don't know what to make of it. But I know that if you divide $10 billion in loans for 10 tons of gold, I would love to lend my gold out at that because that's about $46,000 an ounce. So if anyone out there wants to provide me loans at that collateral value, I'd be happy to part with it for that rate. But in all seriousness, what was really interesting is shortly after that happened, you had what was effectively a run on physical gold begin globally. Chinese purchases ramped up. You saw gold forward rates shortly thereafter invert.

I had a very interesting conversation with a very large physical gold holder in the United States that I had a relationship with at the time. And their comment to me was just buy to frame up, if they would've been ranked as a sovereign holder, they'd have been a top 20 sovereign holder in the world. They owned a lot of physical allocated. They received a call shortly after one of the bulge brackets had downgraded gold to a sell. Same bulge bracket called them up and said, hey, here's why we're downgrading it. And we think you should sell it, and we stand ready to buy anything you want to sell.

And this person is further indication of other things I'd been hearing at that point in time that there's something happening here in terms of physical demand detaching from the paper market. And when I say detaching, it ties back to my point of why I don't think it's been a real market since 2013, and that is that you've seen a very steady flow of physical from West to East. It's a fairly opaque market. But the Swiss import/export data is a decent picture. And it's crystal clear what's happening. It's flowing from West to East.

And in particular post-'15 or '16, it's interesting. Goldman has written a number of times that when the renminbi falls against the dollar, imports of gold rise into China. And so to me, I think after 5 or 6 years of this process, to me, what appears to be happening is that gold is effectively serving as a governor on how far and how fast the renminbi can fall against the dollar. In other words, because the supplies of physical sort of are theoretically finite, at least at certain price levels, every time the renminbi falls, imports into China go up. The vaults in London and in the US get drained because it can't come out of China because once it's in China, it doesn't leave China, by and large, at least in the volume itself.

To me, it almost seems like it's the physical market- I won't say go all the way to- it's tightening or it's imminent, but it seems like there is actually a mechanism that is being put in place by all of this dynamic that is beginning to wind or close the gap between- at least making the physical market have some semblance relative to paper because what you saw in 2013 is you just saw the paper contracts' outstanding increase.

BRENT JOHNSON: There's not a shortage of physical. So I find that interesting. Again, I would have thought that it would have changed earlier. But the fact that it hasn't, it's made me think about it in a different way.