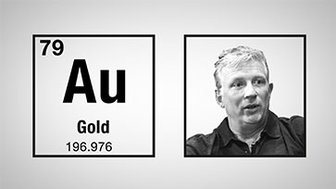 Humans have been transfixed by gold for thousands of years,…

Simon Mikhailovich of the Tocqueville Bullion Reserve talks with Real Vision co-founder Grant Williams about how to use gold and silver as insurance in an uncertain world. With rapidly advancing technology, there are more and more factors to take into account when buying and storing gold. Mikhailovich runs down the list from gold storage to cybersecurity concerns. This video is excerpted from a piece published on Real Vision on May 11, 2018 entitled "Gold's Evolving Role in Portfolios."

SIMON MIKHAILOVICH: You have to think very practically. I mean, first of all, this goes back to Boy Scouts. Be prepared, right? Let me just say this. Cyber risk is a huge risk.

Whatever happened with the elections, we're doing the same thing to a lot of other people. The fact that the city of Atlanta recently was attacked, and all of its debt is being held at ransom. I mean, you cannot, as a reasonable person, 100% rely on cyber networks being completely operational and up to snuff at all times.

GRANT WILLIAMS: And now, everybody's ground zero Facebook is out. I mean, that's the one system people have totally relied on because they've given their information to that. It sounds asinine, but I'll make a very serious point that when Facebook turns out to be a danger to people's privacy, and that should be a wake up call that these things are real.

SIMON MIKHAILOVICH: It is. I don't know if it will be a wake up call to the millennials because they have grown up with this. They don't value, necessarily. privacy. But in financial affairs, I mean, think about it if you don't have cash in the pocket. What was happened here, a hurricane in, what is it, 2012, right?

SIMON MIKHAILOVICH: Yeah. We were together in that. I remember you got kicked out of your hotel.

GRANT WILLIAMS: I did.

So for example, people think I need to have gold coins. OK, gold coin right now is $1,300 some an ounce. All right? So each one-ounce coin is a $1,300 bill today. Where are you going with $1,300 bills to buy your milk and cookies? Right? Doesn't make any sense.

So right there, for people who think or for people who want to have some reserve to pay for expenses, god forbid, and this is a very extreme situation, not as likely as a financial debacle of which we'll get to next. How can I operate? Silver dollars. Because today, silver dollar is, what, $17, $18, whatever, dollars. OK, so it's a $20 bill. So maybe it'll be a $50 bill. It's manageable. $1,300 bill, which is the coin, could be $5,000 bill. It's not feasible.

So right there, instead of hoarding gold coins, or you can hoard some gold coins for like bigger purchases. But for everyday, you should have silver. It's common sense right there. Now, in terms of wealth preservation and bigger, larger amounts of money, say $100,000, for people who have that kind of money, you have to think, what are the risks? And how am I going to use this if and when the time comes?

So for example, one of the answers to those questions that I referred to earlier, German Central Bank, they actually made some very good points. They said, well, obviously, it's for emergency. It could be used as collateral. Gold could be used as collateral in case of emergency to borrow against, right? And it can also be sold for different currencies for which purpose, it should be stored in different locations.

So they explained why they store gold in different places, because it could be mobilized. And not just converted back into their own currency, but if it's held in other countries, it could be converted in other currencies. So for an American, for example, if you store gold in the United States, aside from logistics issues as to how you're going to be handling it if you want to store it personally, the only exit through that is through US dollar.

Well, it so happens that the dollar may be problematic. I mean, we may have a currency change. And you may not want to get back into US dollars. You may want to get into a different currency. Well, you can't do this inside the United States, right? So that's why, for example, the Bundesbank prepositions, if you will, some of its reserves in different locations.

There are storage facilities in locations that, I think, don't make a lot of sense, because they're either isolated, they're islands, or let's say in Utah. There's nothing wrong with the state of Utah. But there's not exactly a vibrant market for gold bullion in Utah. And so if you need to monetize that or change it or move it, I mean, it's very far from everything. So that doesn't make a lot of sense.

But at the same time, places like, say, Switzerland or Singapore are the world hubs of bullion commerce, where there's a tremendous amount. They're smelters. There are traders who are not banks who are commercial traders. I mean, they're major jewelry supply chains. They're places where you can monetize an easily exchange your gold in the case of emergency.

I'm just giving you the framework of how you think about it. So you have to think what can happen? And then you have to think when that happens, what, actually, am I going to be doing? So what if I have it on a app? Well, OK, these people have millions of customers on an app. I mean, are they going to be able to help me in my situation or not?

SIMON MIKHAILOVICH: Then what happens? Who is answering 100,000 phone calls? Those are the types of simple things. And then we've talked about this before, you know, your property rights. Of course, trust is the most important thing. As my lawyer has always told me, I can write you a good contract, but if you deal with the wrong people, all it's going to give you is a good lawsuit. You don't want that, because by that time, you've lost already, right?

Or are they fair weather friends like the institutions are? They're there therefore you as long as it's convenient for them and as long as they're making money. I mean, look at the business models of the dealers, of people who deal in gold. Most of the business models are based on transactions. If you don't transact, you're not a valuable customer. I mean think about that.

GRANT WILLIAMS: This goes back to your story with the bank in Switzerland, which is the same principles

SIMON MIKHAILOVICH: Of course, of course. Look at Facebook. If you're not paying for the service, for the product, you are the product.

SIMON MIKHAILOVICH: Right? So for example, there are all these cyber platforms that are now rising up with the gold blockchain and gold connect. And they somehow, it's all free. Well, it's not free. I happen to know that storing gold costs money, that ensuring gold costs money. So if you're being offered a free service, how is that working? Who is paying for it? Well, they're trying to defray the cost of all that through the transaction volume. Is that going to work or not? I don't know.

GRANT WILLIAMS: Well, this is it. We don't know. And the technology is changing so fast. And all the changes are optically, at least, designed to make things easier and cheaper and better for all of us. I mean, we've kind of got used to that. Every technological innovation makes things better and easier and cheaper and more seamless.

GRANT WILLIAMS: There needs to be a cost for preserving the one thing you can't afford--

SIMON MIKHAILOVICH: It's as simple as that. Free insurance is worthless. You have to pay for the service. You don't have to pay through the nose. It doesn't mean that people need to steal from you or take your money and promise you things, no. But they're actual real-life costs of services. And if you are not paying those costs, then somehow they're being hidden into what you're not getting. I mean, it's as simple as that.

And again, going back to the Facebook example, if you're not paying for a product, you are the product. You're the fool. There's no other way around it.

It says, for example, that you do not have to report gold held offshore if it's held directly. It is purposefully not explained what that means. So it could be interpreted, and is interpreted by people who provide services, that if the gold is in your name, and it's in the warehouse somewhere, that it is held directly.

But reasonable people can have a different interpretation. They can say directly means if you're an American who happens to live abroad, and you happen to have gold in your sock drawer, well that's directly. But if you've given it to somebody else to hold on your behalf, well, that's not directly. That's through somebody else. And so these rules will be interpreted sometimes later.

And it will be your burden. When people use some kind of tax deduction that's a little ambiguous, in the accounting world, they say, we're going to take a position. We're going to take a position that this is how we interpret the regulations. Well, guess what? If you get audited, it's incumbent upon you to prove that your position is correct to the IRS. The burden is on you.

I mean, those are the types of things that you need to think about. And yes, it's a reserve that not just can protect you in terms of your wealth, but it can create multigenerational wealth. Because my background is in distress investing. And if one thing I learned is that access to liquidity in the moment when people have no liquidity is priceless.

So I see gold not only as a panic type thing where the Armageddon, I see it as a strategic liquidity reserve that can A, help you survive, but it can also make you much wealthier than you are by giving you options and opportunities when other people have no options and no opportunities and are forced, down the path, of selling off what they have just to meet their obligations.