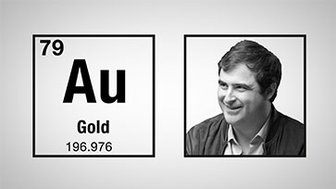 Real Vision co-founder Grant Williams and a host of experts walk through the history of the gold standard and the potential for a return to gold-backed currencies. After its "temporary" suspension by President Nixon in 1971, many people thought gold as money would go away, but its value has endured. This video is excerpted from a piece published on Real Vision on January 26, 2018 entitled "Gold: The Story of Man's 6000 Year Obsession - Episode 1."

GRANT WILLIAMS: This idea of the preservation of purchasing power is central to the notion of buying gold as a store of wealth. And it's been a proven strategy which has transcended history. As mankind has debased hundreds of paper currencies over the centuries, gold has remained as the anchor at the heart of the financial system. And the reasons for that are the unique properties which made it money in the first place. Gold's durability, portability, fungibility, and divisibility have combined to make sure that it's maintained its purchasing power, outlasting every fear alternative for almost 6000 years.

Through booms and busts, through war and famine and through mankind's constant ability to debauch undervalue fiat alternatives. While the dollar has been the world's reserve currency for 40 years, that hasn't always been the case. The British pound, the Spanish peseta, and even the Portuguese escudo at one point in history were all as mighty in their time as the dollar is today. Throughout history, the civilizations needed to finance expansion, they were constrained by their gold reserves. The Romans physically clip their coins with using the amount of gold and silver, and thereby reducing the wages paid to their armies, until such point that the soldiers refused to fight.

For the majority of the last 200 years, the world has been on a gold standard of some sort. But we live in the first period in recorded history of a purely fiat currency regime. That regime began when Richard Nixon broke the dollar's linked to gold in 1971.

Today, the absence of any link to gold has allowed governments to increase debt to completely unsustainable levels. When society can no longer service this ever-expanding debt mountain, a return to a gold standard of some sort is almost inevitable.

We've all lived in a purely fiat monetary system since Richard Nixon's supposedly temporary suspension of the dollar's convertibility into gold. And because of that, the idea of a return to a gold standard of some sort is seen as both unthinkable and unworkable. The gold standard has been blamed for the Great Depression. And many prominent politicians and economists have claimed that a gold standard will be impossible in today's world.

The question is why? What was the gold standard? And why does the very idea of its reinstatement stir up such passion in the hallowed halls of governments and central banks?

JAMES RICKARDS: We had no Central Bank from 1836 to 1913. That was one of the greatest periods of prosperity in world history. Forget American history- invention, the telephone, the Reaper, the airplane, radio, phonograph, massive increase, electricity, massive increases in productivity, great industrial successes, Andrew Carnegie. So, America grew like crazy with no Central Bank.

First of all, it's voluntary, you as a nation could choose to be on it or not. A lot of countries found it in their interest to do so. And all you had to do is okay, we print money, we have this paper money, but it's redeemable for gold at a fixed rate. And you declare that that was your policy and you stayed with it. Now, if a whole bunch of currencies are convertible to gold at a fixed rate, then to a simple transitive law, they're convertible into each other at a fixed rate. And that was how the world work. Again, with no guidance from bureaucrats.

And if you ran a trade deficit, you had to pay for that in gold. But what happened when you had to pay for that in gold, where you were decreasing your money supply that was deflationary, prices went down, wages might have gone down for that matter. But that made you more competitive. And then you would come back to a trade surplus because they will send you the cheap provider. Likewise, if you were running a trade surplus, and you were getting all this gold, what happened? Your money supply increase. That was inflationary, your prices went up, you were less competitive. So, this was a self-equilibrating system.

RICK RULE: The gold standard was a method that tied the political classes and the voter to reality with regards to the construction of an economy untied to arithmetic.

RICK RULE: The gold standard didn't work because it didn't allow the spenders to plunder the savers. The politicians were of course instrumental in debt. It wouldn't work today because the political class doesn't want any part of the system that constraints their power.

DANIEL OLIVER: There was an article, an editorial in New York Times actually that they point in the '50s, pointed out that it didn't fail, it was killed. It was killed by the Allied Powers because they wanted to fight war. Before World War I broke out, the consensus was- the general consensus was the war couldn't last more than a few months. Because there was certainly wasn't enough money for the governments to fight that war, and of course, that view, didn't understand the first thing governments would do was cancel the right of redemption and print the money to fight that war.

JAMES RICKARDS: There were five people in the room at Camp David that weekend. It was August 15, 1971, Richard Nixon went up to Camp David with his economic team. It was Paul Volcker who was a Deputy Secretary of the Treasury at the time, Arthur Burns who was chairman of the Fed. John Connally was Secretary of the Treasury, President Nixon, and there was a fifth man. And for many years, I never knew who the fifth man was, I couldn't figure it out. Turned out to be a friend of mine. Kenneth Dam was the dean Emeritus of the University Chicago Law School. I spoke to Volker, I spoke to Ken Dam. So, I spoke to two of the five people who were there, most of all with the decision. And they all told me the same thing, which is, they really thought it was temporary.

GRANT WILLIAMS: So, a monetary system, which had endured for thousands of years, was terminated by the stroke of a president's pen. But what changed when Nixon shut the gold window, removing the dollar's anchor, and how has that affected the way we think of money today?

DAVID FERGUSON: They shot the gold window, they thought, well, let's get ready to reopen it tomorrow. And see just in case everyone sort of- there's a run on the dollar or the people lose confidence in the monetary system, let's get ready to reopen the window pretty much immediately. So, really, it was sending up a balloon. Let's try this policy, because we've really run out of money. And the other option is to actually run a much tighter fiscal system.

So, it wasn't the actual fact of closing the window that changed anything. It was the fact that everybody else accepted it. Right? If everybody had said, what unit, dollar piece of paper, forget it, no. And the dollar collapsed, or people start to accept the treasury bills, then we'd still have the gold standard. But it's the apathy of the general population at large, that caused or that allowed Nixon to get away with this change?

RICK RULE: If you think back to 1971 and decide whether on a global basis more people trusted Nixon or more people trusted gold, the circumstance where gold rose in dollar terms from $35 to $850 tells you something about the franchise enjoyed by Nixon and the franchise enjoyed by gold. So, what really happened to gold? Nothing. What happened to the US dollar in the ensuing 40 years? Catastrophic.

NED NAYLOR-LEYLAND: The entire financialization of the system came about because of this soft default on US Treasuries that happened and of course, there's a soft default because it was a temporary suspension of the convertibility of the dollar and i.e. they still owe that gold.

DANIEL OLIVER: So, in common parlance when Nixon abandoned the gold standard that's called in August of 1971. The idea is that gold is stopping money because the dollar wasn't tied to it and there were people who thought gold would collapse without the monetary demand gold would go away is absolutely crazy. Because of course, it was a direct connection of gold stabilize the dollar, not the other way around.