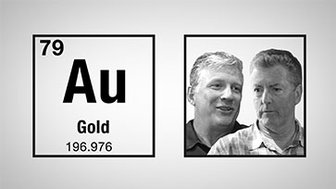 Grant Williams, co-founder of Real Vision, and a host of gold experts including Simon Mikhailovich, Luke Gromen, and Ronald-Peter Stoerferle tell the stories of how gold has helped people deal with financial, political, and even humanitarian crises from Soviet Russia to the 2008 financial crisis. This video is excerpted from a piece published on Real Vision on January 26, 2018 entitled "Gold: The Story of Man's 6000 Year Obsession - Episode 1."

GRANT WILLIAMS: Gold is the one asset which has survived every single panic in recorded history intact. In 2008, gold's price fell initially surprising many, but the reality was that gold was providing liquidity in an illiquid marketplace. Once market stabilized and QE began in earnest, gold's price soared. But how can we expect gold to act in the next financial crisis?

The reason I don't think necessarily that's going to be the same is because the problem that 2008 revealed, which is excessive debts and excessive leverage, has essentially been kicked upstairs to the sovereign level. And so, what was a private debt crisis is likely will come back as a sovereign debt crisis, which is a completely different animal with very different parameters. So, whereas a lot of people are telling me now or I hear a lot of people saying, well, the banking system is much safer, because the leverage is lower, because there's less rehypothecation. The answer to that, well, that may be true. But if the currency in which they measure everything is de-botched or devalued, and that may happen overnight, in a very different way that would happen in 2008 happened.

We know the end game. We know that all of these debts cannot be paid. We know that the unfunded liabilities cannot be met in terms of real purchasing power. So, then the question is, how does that gets resolved? Well, there are only a couple of ways it can get resolved is either through inflation, or deflation, deflation, meaning defaults.

GRANT WILLIAMS: And the likely event that we do have some form of situations similar to that of 2008 and no matter what form that event might take, gold remains one of the few ways that you can protect yourself and preserve both your wealth and purchasing power. Man's connection to gold is not just a financial one, however. History is filled with deeply personal stories that demonstrate gold's role as a store of wealth, as protection from government confiscation via inflation and debasement. And as an insurance policy, that when called upon, pays out in ways that change the lives of those who own it.

SIMON MIKHAILOVICH: I know a person who grew up in Vietnam whose father was a translator for the US military during Vietnam War. And when the US left Vietnam, they were unable to leave with the US forces. And so, they were left behind. And having been left behind, they obviously were subjected to oppression by the communist regime. It so happened that the family of 14, one of the uncles there was a dentist and he was able to accumulate over the next whatever, 10, 12 years, a certain amount of gold so that in the late '80s, this family was able to pay seven ounces of gold per person. So, times 14, over 100 ounces of gold, to get 14 seats on a boat that left Saigon in the middle of the night, lost power in the next day, drifted at sea for a few days.

And eventually, was towed still to the Malaysian coast by the Malaysian Coast Guard. They spend two years in a camp for displaced persons. They eventually made their way to Singapore, where the father was able to go to the US Embassy, present his credentials, showed that he was a translator for the US or interpreter for the US forces. And the whole family of 14 was given these visas to come to the United States. And these people's lives were saved. And what did they do? What did it take? It took seven ounces of gold per person for a family of 14. And so, I think that's as good an example of gold being Plan B, as I can come up with.

LUKE GROMEN: A couple years ago, I was at a wedding. And some friends of ours, I was talking to some friends of ours, and they were Russian and Ukrainian and had emigrated here, were now American citizens. And we got to talking about what happened in the 1990s in Russia. They described to me, the woman, her father had been a doctor in her village in the Ukraine. And she said we'd had enough saved in the bank, we were the richest family in the village. And we had enough in the bank to buy five cars, which apparently for that village was quite a bit.

And she said they close the banks for two weeks. And when they reopen the banks, we took the money out we bought groceries for one month. And her husband said yes, similar story. I was saving up to buy a motorcycle and had enough saved to buy a motorcycle and my dad wouldn't let me buy it. Closed the bank for two weeks. Banks opened back up, I took the money out and bought a carton of cigarettes. So, I said to them, I said so I probably don't need to explain to you. I said how did gold do? And they both laughed. And they said anyone that had gold, silver, jewelry, they did totally fine.

DAVID FERGUSON: I love the story of how the French spirited their gold out of France and off to Canada and various other places when the Germans arrived. It's a great story. And they have to make a movie out of it. It's really good. And basically, they split up their gold reserves into tiny little portions and they went off on mule carts and fishing boats and they got their nation's wealth out of the country. And they did it before the advancing army. It's a story of Daring Do and all of that stuff. Fantastic.

RONALD-PETER STOEFERLE: I once heard a story about the Soviet Union where gold obviously was forbidden. You could go to jail if you had physical gold, but you were allowed to have wedding rings, gold wedding rings, and there was a smart guy and he had like 50 wedding rings. So, every month or every couple of months, he went to the market and had just enormous purchasing power due to his gold ring. And I think this clearly shows that you just have to own at least some gold.