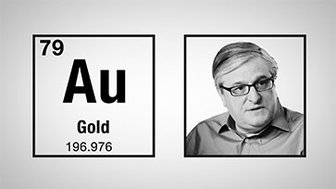 Simon Mikhailovich of the Tocqueville Bullion Reserve talks with Real…

Surviving "hot" jurisdictions, diseases like malaria, and disastrous helicopter crashes are just part of why being in gold mining and exploration is so difficult. Grant Williams talks to Ross Beaty and a host of other mining experts to better understand the challenges gold miners face finding, mining, and refining the yellow metal. This video is excerpted from a piece published on Real Vision on January 26, 2018 entitled "Gold: The Story of Man's 6000 Year Obsession - Episode 1."

GRANT WILLIAMS: The fact that a lump of yellow metal can command a price of over $1,000 an ounce is a source of mystery to many people. But when you look at the cost of exploration as well as the cost of the labor and energy which goes into extracting from the ground to say nothing of the taxes and the regulatory burden it becomes much simpler to understand gold's value

But there is a point at which every deposit in the world becomes uneconomical to mine when that point is reached the decisions that have to might have far reaching consequences.

ROSS BEATY: So there's an expression-- mines die hard. They really are hard to kill. And they are hard to kill because when you have a mine that let's just say is losing money, that's an economic reason to close a mine, you might have 1,000 people whose livelihoods depend on running that mine.

So mines die hard. It takes a long time to close a mine. And most companies will end up losing money for a long time before they bite the bullet and say, this is hopeless. Miners are very optimistic people as a rule. We're born optimists, otherwise we wouldn't be in this business.

GRANT WILLIAMS: While it may be true that every miner is a born optimist, this optimism and this willingness to go to dangerous places in search of untold riches is certainly not without its dark side.

ROSS BEATY: I mean, I've had cerebral malaria. I've had toxoplasmosis, various parasites that almost killed me. I've had helicopter crashes. I was in a plane crash that destroyed the plane, I had to climb out the window. I've fallen in crevasses. I've been in riots. I almost was killed in Liberia-- in a riot in Liberia. I've been tear gassed in Bolivia god knows how many times.

And of course, you know the real carnage is and the expiration is? It's cars. It's bad roads in bad places, and people get it in accidents in cars. And so how many geologists that I know and actually have worked with in my company who have died in car crashes, I can count them on two hands, which is a lot.

Three guys from my class have been shot in hot places. Two of them were shot getting out of a helicopter in the Philippines in Mindanao. And one was killed in South America in a-- by bad guys. It's a very dangerous business. But I love it so much that I embrace that kind of risk. And it's worked for me, and I'm still alive. And so here we are.

GRANT WILLIAMS: The challenges associated with finding and mining this strange yellow metal increase every year. But as the process has evolved over the last half century, mining company CEOs are finding those challenges harder and harder to solve.

RICK RULE: The mining industry has been a hard industry to operate in for the last 30 years. And the aura of respect surrounding mining is somewhere below that surrounding garbage collection. And the consequence of that is that many competent people would choose a job in any career other than mining. The people that you see in the executive ranks of mining companies are largely of my generation, which is to say old. While they have experience, we're beginning to lack legs in the industry.

DANIEL J. OLIVER: The biggest challenge I think that gold mining CEOs have today is that none of them that I've met-- and I've met dozens or hundreds of them-- really understand what gold is. They've mined gold as if it were copper, as if it were tin, as it for other things. And you should mine gold in a very different way, because gold is a very different dynamic, given its stock to flow ratio, and given the fact people hoard gold. They don't consume it.

If you go back before the '70s when people understood gold, the impetus was to have your gold mine last as long as it could. And again, this is something that no mining CEO that I have ever come across understands, because they're trained to look at it as another commodity, and it isn't. And as a result, the total entire gold mining industry is massively misallocated to its capital.

BRENT COOK: One gram for ton is equivalent basically to one part per million. So what we're seeing is that in a million grains of sand, one of those grains of sand is going to be gold. So it's not much. Not much at all. But that can make money. So that's sort of the scale we're looking at. And the complexities involved in figuring that out is unbelievable.

Because consider we're drilling a hole 300 meters down into an ore body, looking for an ore. That's going to be 100, 200 meters wide, et cetera. Your drill hole covers an area that big. You cut that in half, crush that half of the core down, and then you could distract a 30 gram sample. And that 30 gram sample, whatever that is, is meant to represent an area 25 by 25 by 25. So you can kind of see the complexity of issues we deal with here.

And the first time I found a gold mine-- I mean, a bunch of times I thought I did, but didn't-- but the first time I actually did, I was working in Honduras funded by some guy out of Australia. And working on this conceptual idea of these hot springs that are forming gold deposits. So I went, got the geologic maps, which were pretty poor. And in fact, at that point in Honduras, you could only get a map from the government. And they cut all sorts of bits and pieces out of it so it was very difficult.

And what I saw on the map was La Tembladera, which is bubbling hot spring. So I went there and found a big outcrop of silicified, brecciated center, which is hot springs' deposit. And that never carried anything. There wasn't much gold in that. Yet had on the sides, on the fault over here in this rock type, which is altered all to hell, I sort of picking up some good numbers, you know? Seven, eight grams gold.

You're like a detective. You're trying to figure out what happened on this piece of ground a million, 10, 100 million billion years ago based on a little bit of data. So it was always fascinating to me just figuring that sort of thing out. And if you get it right, it's an incredible feeling. Like, wow, you know, I got it right. It's working. It doesn't happen that often.

But as a geologist, I mean, that's why I love it. You know, no matter where I go in the world, I always got rocks to look at and think at, and I like that.