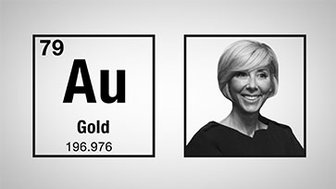 Roy Sebag, CEO of GoldMoney, talks with Stephan Spears of McEwen Mining about the difference between gold exploration and bitcoin mining. He explains why the differences between the two processes are important for users and investors alike. This clip is excerpted from a video published on Real Vision on July 3, 2019 entitled "No, Don't 'Drop Gold.'"

ROY SEBAG: Actually, Stephan, I'd be interested in your view on the differences between gold and crypto mining, since you actually have more experience than I do in the extractive industries. And you are an executive of the New York Stock Exchange list, a gold miner. What do you think are the differences here? How do you approach this thing?

STEPHAN SPEARS: Well, I think the- you talked about exploration. And that's an important point. There's essentially two phases in mining. First, you need to find the ore body, that's often the most difficult part. Only probably one in 5000 prospects ever become an actual ore body. In mining, a lot of the value that's created actually occurs before any gold is brought out of the ground. And I think that's an important distinction, because that part of the success of exploration creates the capital, forms the capital that allows mining to persist.

The next phase, of course, is getting through the regulatory hurdles, and actually raising the capital necessary for this very, very capital intensive business of gold mining. And I think that those distinctions and the geographic randomness of gold deposits globally really gives it a very decentralized look relative to however many crypto miners are-

ROY SEBAG: And also a natural meritocracy. So, what's the equivalent in cryptocurrency mining of a high grade mine? A high grade gold mine or a discovery?

STEPHAN SPEARS: The best you can do in crypto is just having lower cost electricity locating in Iceland or Quebec where you have subsidized power-

ROY SEBAG: Which is, once again, taking away from the society's resources.

STEPHAN SPEARS: Exactly. All of that electricity could be put into other productive uses. So, people have determined that this is the best use case for that power.

ROY SEBAG: Or what's the equivalent in gold mining? What is it, 30%, 40% of gold mining is still done artisanally by hand?

STEPHAN SPEARS: I think that's important, because in a lot of countries that perhaps don't have the strong fiat currencies that exist in the United States and Canada and Europe, their way of turning their incremental effort and toil into savings and wealth is through gold mining, and probably 30% or 40% is still mined artisanally. And of course, there's a contrast there, because that's not something that's accessible. Somebody with no capital in a poor country cannot go and start a crypto mining business, that's just not going to happen.

ROY SEBAG: Of course. And as we know, they wouldn't even have a return. So, for example, because what we come down to is a return on your metabolic energy. So, I own some gold deposits, I can think of one that I own in Nevada that has a grade of around eight or nine grams. It's a vain system, a court system. You and I could go out and get a tent, get a pickaxe and shovel, go down to the tunnels, find the vein, and sit there for a week. And it would be a profitable endeavor. We'd eat some food, and we get some gold out, and we could sell the gold to someone that needs to use it for something. And there would be our meritocracy, toil. There is no equivalent like that with Bitcoin.

You can't just you can't just eat food and negotiate with nature and get Bitcoin out of the ground. With Bitcoin, what people are doing is essentially building computers that have to run 24/7 in the hopes that they win a puzzle. And the bigger the computer they build, with the more power they invest, the more likely they are to win a puzzle. But once the puzzle is won and the coin is sold into the market, the owner of the coin depends on the continued mining of that miner. And so, the proof of work that was expended by the miner, the historic metabolic energy, because there's certainly a lot of metabolic energy going into the production of Bitcoin, historically.

It's not bound to the coin that I'm holding at Coinbase, or in my cold wallet. The only thing binding the abstraction to the proof of work is the miner's continued insistence to perpetuate the network into the future. It's the most fundamental difference. And I really implore anyone that's watching this interview, that's from the digital technology service economy that hasn't experienced the real natural world, the primary industries, to meditate on what we're saying here, because this is ultimately where I think there's a gulf. The difference here is that you don't own something that depends on the laws of physics for it to continue to be the same thing like gold.

And at this point, you'll often get some of this crazy talk like, what about asteroid mining? Or what about if we discover fusion? And when they bring these nonsensical scientific theories up, they will only focus on what would happen to gold, not realizing that, if you, for example, have a Deus Ex Machina source of energy, everything else would become cheaper, including, for example, doing a 51% attack in the hashing algorithm. So, everything is naturally scarce based on those Legos, those elements, but that relationship between the elements is fixed through time. And this is, for example, why all these myths about hoarding under a gold standard are false. This is why for example, deflation under a gold standard is good in the Austrian tradition, where I totally agree with that.

But ultimately, what we're talking about here, when Barry says things like that, when Bitcoin proponents talk about there's no difference between gold and Bitcoin. And in fact, if you're going to calculate the cost of mining Bitcoin, why don't you calculate all the cost of mining gold, storing gold, transporting gold? No, no, no, no, there's a philosophical difference here that you have to appreciate. The gold is mined once, it lasts forever. Its blockchain are the laws of physics. And if you want to get into these non sequiturs, suspension of laws of physics, asteroid mining, well, everything would change. I assure you gold would still do the best in that equation, because of its natural attributes.