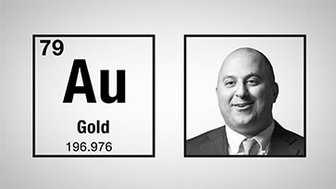 Since 2006, the price of gold has nearly doubled, but…

Roy Sebag, CEO of GoldMoney, talks with Stefan Spears of McEwen Mining about what actually separates gold from bitcoin. Sebag notes the physical space, energy, and capital required to profit from investing in gold versus bitcoin, and he compares the corporeal qualities of the different assets. This clip is excerpted from a video published on Real Vision on July 3, 2019 entitled "No, Don't 'Drop Gold.'"

ROY SEBAG: Yeah. So, the way I look at the world in terms of an economy is I actually like to use the word 'cooperation', human cooperation. And at the end of the day, the reason I think that we're able to make predictions and cooperate is because the laws of nature, laws of physics, whatever you want to call them, are immutable. They're irreversible, and they're immutable. And they never change. And because they never change, we're able to essentially observe, measure, predict, and repeat various activities between each other as we seek to cooperate and achieve prosperity.

And so, what we find is that things that are from the mind that are abstractions, or of memory, generally don't last. Their ideations, their trends, very academic term, but logical pluralism, there is no definite truth. Whereas things that are of nature are the load stars, they're the Polaris that allows us to cooperate. They're the sun, so to speak.

Now, when it comes to the difference between an element which is corporeal, and something like Bitcoin, what you essentially have to understand is that the element doesn't need anything other than the laws of physics to exist. Whereas Bitcoin is an abstraction. It's a system where humans come together and decide to allocate resources towards the reification of this abstraction so that it continues to perpetuate into the future. If humans do not cooperate towards that goal, that abstraction ceases to exist.

Where this really comes together, is if you consider that the economy has these corporeal elements like Legos. And we take these building blocks, and we build modular systems of cooperation to use them. But these building blocks are always fungible. And they can always be moved from different activities that we do. Now, our goal when we cooperate is not to just exchange bitcoins or exchange Legos with each other, it's to use the Legos to build a resilient, prosperous society. So, when you look at something like gold, it's definitely a Lego in the system. But it's a Lego that I can use for different things to do different things. I can move it around.

The fact that it's a Lego is based on the laws of physics. With Bitcoin, what I have to do is I have to go somewhere in the corner and take a lot of pieces of Legos, just to maintain a new system of Legos to do new things with it. And that's where the fundamental distinction is between the natural order of the natural world and things that are abstractions. And when it comes to Bitcoin, that distinction has become quite difficult for many people to appreciate, because of a combination of the language that's used to describe what's happening with Bitcoin, misnomers such as mining, ideas such as forgibly scarce, scarcity. And I think that where you have to really understand this is that Bitcoin is not being mined, it's being powered into existence.

So, essentially, all of these resources are being channeled into bitcoin in a way that perpetuates its own existence, whereas the gold itself is indeed being mined once and then once you mine it, it lasts forever. It survives into the future, it doesn't rely on the same miner that mined it in the past. And I'm sure we can get into more details about this, but this is really what it comes down to. And I find many of the Bitcoin evangelists have a problem even getting past that point, they simply don't believe it to be true. But of course, it is true. It's just an unfortunate fact. And I can quote some more reasons why.

STEPHAN SPEARS: Okay, so we can get back to the real differences between gold mining and Bitcoin mining in a moment, and I think we should also touch on the decay aspect of Bitcoin, I think that's a very important topic. First, maybe let's address some of the claims that are made in the 'Drop Gold' campaign that gold is heavy, that it occupies a lot of space, it doesn't have the value density that Bitcoin because Bitcoin is weightless, and so forth. I think you've proven that those are verifiably false, can you just go through a couple of those, and then we'll get into decay?

ROY SEBAG: Yeah, very quickly. So, in the advertorial campaign, you see people holding gold, which essentially misrepresents the weight of the gold. Now, this is very important, because those Legos that I mentioned earlier, those corporeal elements, they have immutable properties that are accessible to us through time that never change. And so, we know that of the 90 natural elements that occur naturally, gold has the highest specific gravity, which means that it condenses into a volumetric space, and becomes heavier and heavier and heavier relative to everything else.

So, in the advertorial, you see a guy essentially carrying two bars of gold, but those bars of gold would weigh 220 pounds, and he's effortlessly walking around with them. That's impossible. No one could actually carry gold that way. Moreover, we're talking about 10, $20 million of gold that this person would be holding. So, the misrepresentation begins by saying, it's this shiny metal, that's heavy. But in reality, that value density, the amount of energy embodiment that went into producing the gold, is why it's worth so much. And in fact, no other piece of Lego in the system could do that. No other corporeal element could store so much energy in such a small amount of volumetric space. So, that's one.

And then when I actually try to figure out how much volumetric space does Bitcoin take up, I discovered that it takes up an incredible amount of volumetric space when you consider the mining rigs, when you consider the transformers, the physical space that's required to actually run these servers that are constantly solving the mathematical puzzles. You end up with a difference in ratio of 500 to 5000 times depending on how you look at it. And that's when you're comparing all the gold in the world worth $8 trillion to all the Bitcoin in the world today, which is worth about $200 billion.

So, the idea that this Bitcoin that you're using on your smartphone has no impact or footprint in the physical corporeal world, that it's purely digital is false. It's cognitive dissonance. In fact, it's taking up an incredible amount of energy, physical footprints, resources, and ecological opportunity costs because it's requiring a continued investment in the reification of this abstraction, so that the bits of Bitcoin, which are just symbols, are worth any more or act any different than any other bits of symbols that I could just write with my pen and paper.

STEPHAN SPEARS: So, what are we talking about on an annual basis, what does it cost to actually run the Bitcoin network?

ROY SEBAG: So, I was very nice to Bitcoin in this exercise. All I did was calculate the amount of energy because I always try to think about things thermodynamically. And so, if you look at the latest hash rate of the network, it's about 65,000 petahashes. It would require 6600 megawatts to keep that system going. 24/7, that results in about $7.5 billion a year of electricity at wholesale rates. So, that's essentially the cost of electricity to society, is $7.5 billion.

Then you have to look at the mining rigs, it would require about 4 million mining rigs to run at 65,000 petahashes. So, when you calculate the cost of the mining rigs, again, even if I'm being very nice to Bitcoin at $500, $600, you're talking about another two or $3 billion. And the mining rigs have generally lasted for three to four years. So, I was extra nice to Bitcoin, I use a six-year amortization schedule, depreciation schedule. And in that regard, you're looking at about $10 billion before you get into labor costs, rent costs, things like that. So, that's your decay, that's your theta bleed and option parlance.

And that $10 billion a year is owed to the miners by the owners of the coin. And so, when you look at the coin, even today, when it's valued at $13,000, that's about $220 billion of market value, you have a monetary system, which is worth $220 billion, that's costing about four to 5% a year just to perpetuate its own existence year over year. That, to me, is worse than any negative yielding building bond, because it's telling you that the only way this works long term is for the price to keep rising.