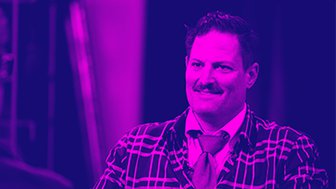 How I Got My Start in Finance · Featuring David Collum

Dave Collum, professor of chemistry and chemical biology at Cornell University, joins Tony Greer of the Morning Navigator to explain how he became so interested in financial markets. Collum talks about his perspective as an academic, and touches on the success that’s he's had investing as an outsider. Filmed on July 25, 2019 in New York.

DREW BESSETTE: Welcome to Real Vision's How I Got My Start in Finance. This week, Dave Collum, Professor of Chemistry and Chemical Biology at Cornell University talks with Tony Greer about his unusual entrance into the world of finance.

DAVE COLLUM: Well, I started as a kid. I was thinking to go into Wall Street and then I got diverted. I was a science guy and I went to the ag school, was going to go into med school and then med school and then ended up going to grad school in Chemistry. But my dad taught me a lot. We had some amazing conversations about stock and I think it was around 1993, all of a sudden, it just kind of clicked that I should pay more attention. I was one of the boomers who started to just realize that I had a decent amount of accumulated wealth and I started getting interested. And we're in the middle of a mania.

And so, it looked like that money was just growing on trees. And so, it got interesting. And there was this one guy who started fostered it because he was a traveling salesman for Merck. And he would take all the CEOs of every company visited our tech stocks, and by the time he was done with the cycle, he could tell you stuff about stocks that you really almost shouldn't be knowing about. So, he had some great early tips, made a fortune off them and then started paying attention.

TONY GREER: Wow, that's really, really cool. And then we walked right into the dot-com bubble at the beginning of it so you had a chance to invest and right, potentially make some money there. Although I don't know if that would be your cup of tea.

DAVE COLLUM: Well, it was actually. I was a raging bull. I talked to my dad and said it's transformational. And then somewhere in the ballpark, mid-98 I started to get really creeped out. I had conversations with my father and I said, damn, I'm nervous about these markets and he was noncommittal and then at one point, I said to him, I said, I also fear of missing out. The famous FOMO line. And he stopped me and he goes, that's greedy. And I thought about it and not long after that, I actually liquidated half of my mutual funds and that was in July of '98. And then the market tanked almost to the day, that was just luck. And I said if it comes back, I'm going to get rid of the rest because this is not- so it came back and by mid-99, I was selling everything.

And so, I owned Dell, I owned WorldCom, I made seven fold off WorldCom and got out. That was a good one. Pure luck. Dell, MiniMed, Warner-Lambert, there was just some great companies. And one year, I had a 90% year. How do you not get addicted to those kind of returns? But I sold and then all of a sudden, I was the only guy- a few people who was picking up information from the very beginnings of the internet chatting world like I think probably some like Fleckenstein. And so, by mid-99, I'd exited the market 100%. I didn't own a share of anything and I actually bought gold. I bought it through Central Fund of Canada and I do a two years for at the bottom and I kept buying it and buying it and the NASDAQ was going up and the gold was going down and I was white knuckling it pretty good.

And then it turned. I also shorted the market at that point and I've only done that twice. I will never do it again probably because I now know how stupid I was. But I made about a 30% on that short to just a dumb beginner's luck. And then around '01, I started thinking I got to hedge inflation. The inflation that never showed up. I actually think it did but it didn't show up in the way that everyone thought it would. It wasn't a raging inflation.

I started buying energy and I actually was interested in the commodities. I couldn't find a way to do it, note to ,self I was a stamp collector and when you couldn't find a stamp that didn't cost much, you go, that's the one you want to find. I want to buy a stamp as a kid. I had to send in New York City to get it. I made 20 fold buying that stamp. So in any event, so I started trying to buy commodities. I actually spent some time talking to Jimmy Roger's partner named Clyde Harrison I think it was on the Rogers Commodity Fund. I didn't like it, something smelled wrong to me. There's too many derivatives in it.

And so I just started and I thought none of this lit up because if there's no way to do it then that's certainly not a mania. And so I started buying energy equities, just through Fidelity. I picked six materials type energy things and I started buying. So, I caught the energy run from '01 all the way up to when- I don't know, I've blocked it out of my mind now. Somewhere around '13 or something before it got the tar beat out of it.

So in a nutshell, I was 100% bonds from '80 to '87. The crash caused me to ponder what equities were about. A white haired old guy say, Dave, equities are good investment. You should consider it now. And so, I started going aggressive equities after the '87 crash. It woke me up to him. And then I was in equities 'til '99 and then I went totally whack job. And I've been that way ever since.

And so, my proudest performance was the decade of January '00, from January 1st of 2000 to December 31st of 2009, I compounded at 13% and everyone else is bleeding. Well, it's gold and energy and it was all the right stuff. And I thought I was smart. I thought that and then all sudden, the beatings commenced and it was time to throw the toaster over in the pool and I did. And so, the last decade has been for me the lost decade. So, since I don't short anymore, I would never short at this point.

I was just on the side, a lot of cash, the equities, I went down with the ship on. The gold, it felt like the ship was sinking but then it flattened out at 1200. And if you can't go from 260 to 1900, if you can't take a drop to 1200, you're in the wrong business. It felt bad but then it stabilized, I bought some more actually and everyone's raving on 300% gain or something in the S&P and I'm sitting there on the sidelines collecting .01% in fixed income.

TONY GREER: But you feel safe.

DAVE COLLUM: Well, except for the fact that the clock is ticking and time is the scariest variable. And I'm not keeping up with inflation, at these rates and so time is the variable that has always scared me and a lot of people say, oh, it's your friend. It's not your friend if you're in the wrong position.

DREW BESSETTE: From conversations with his father growing up to his financial awakening in 1993, Collum's self-described dumb beginner's luck and outsider perspective have helped him find his particular perch in the financial world. For Real Vision, I'm Drew Bessette.