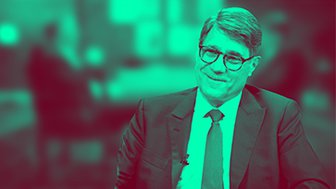 How I Got My Start in Finance · Featuring Michael Moro

Michael Moro, CEO of Genesis, an over-the-counter market-maker for cryptocurrencies, explains how he discovered bitcoin, recognized its value, and dove headlong into the industry. . This clip is excerpted from a video published on Real Vision on June 28, 2019 entitled “An Inside Look at Big Money's Bitcoin Trading."

JUSTINE UNDERHILL: This week on How I Got My Start in Finance, Michael Moro, CEO of Genesis, joins Real Vision to tell the story of how he discovered Bitcoin and entered into the brave new world of crypto all the way back in 2012.

How did you yourself get into Bitcoin?

MICHAEL MORO: I met Barry Silbert, the founder of Digital Currency Group, when he was at his first company called Second Market.

MICHAEL MORO: Correct. We are a wholly owned subsidiary, yes. Barry, I met him in 2008. I had just finished seven years in investment banking at Citigroup. Barry had created this company that could and would eventually take advantage of the oncoming financial crisis. As more assets became illiquid, more assets were being traded over second market, we just really specialized in finding buyers and sellers of illiquid financial assets. Then Barry discovered Bitcoin himself, I believe, in 2011.

MICHAEL MORO: Pretty early on, he went down the rabbit hole himself. I think he took his time and went through the skeptic to interested to convert to evangelist phase during 2011. Then in the office all throughout 2012, he just constantly talked about Bitcoin. One day we were like, what is it? You got to explain it to us. He told us what it was. He actually called it the biggest financial opportunity he thought he'd seen his entire career.

JUSTINE UNDERHILL: This is back in--

MICHAEL MORO: 2012. We said, "Okay." We started studying it ourselves a little bit and we opened up our trading operation in early 2013. The rest is history.

JUSTINE UNDERHILL: Were you skeptical at all when you first started looking into Bitcoin and when Barry started talking about it all the time?

MICHAEL MORO: Back in 2012 when we first started looking at it, I didn't understand it at all. The Bitcoin 101 resources that are available today did not exist seven years ago. A lot of it's very technical code-- zeroes and ones. It's like, how does this apply to finance? We had a really, really difficult time getting our head around, how do you hold something that you can't hold?

You have to do two things. One, you have to keep one of them for an investment purpose. The other one, you have to find somewhere on the internet to spend it. We all went and created our addresses and Bitcoin wallets. All right, don't lose the private key, because then you'll lose your Bitcoins forever. We did that whole thing.

Then all of us are-- everyone's googling how to spend Bitcoin. This is 2012, 2013. There's really only like a limited number of retailers globally that was accepting Bitcoin at the time. Everyone ended up, like, spending their Bitcoins at the same place.

JUSTINE UNDERHILL: Where did you spend yours?

MICHAEL MORO: There was a winery in Australia that actually accepted Bitcoin. It is now the most expensive case of wine I've ever purchased in today's dollars, right? But, yeah, so people bought, like, alpaca socks and--

JUSTINE UNDERHILL: All the random things.

MICHAEL MORO: All of the things that were available. That was really what-- okay, this makes sense. The actual going through it, receiving it, sending it, and keeping your private key, all of that really at least made Bitcoin tangible for us. We were just getting up the learning curve.

JUSTINE UNDERHILL: Your expertise-- you come from a Wall Street background. Then you were getting into illiquid market. Bitcoin fits perfectly into that. What was it like in the early days? What would you say an OTC market for Bitcoin, and how does that differ from something like a traditional Wall Street market?

MICHAEL MORO: What was really, really hard-- I came from asset-backed securities and background. We were used to cash flows and assets. Here comes Bitcoin that has nothing. Then how do you value this thing? How do we get our head around what's a fair price for what Bitcoin was? Price discovery, which is still often cited as a difficulty when it comes to Bitcoin was much, much harder back in the day because back then, you could really only trade on two exchanges.

One was in Slovenia and the other the Mt. Gox in Tokyo. We really had nothing in the United States to do this. How do you know that the price you're getting is actually the right price? On the OTC side, unbelievably illiquid. Because we were trying to make a market and we needed a buyer and seller, the chances of us having a buyer and a seller within the same four-hour window was remote, at least very early on. We had to use some of our own balance sheet, some of our own capital to make markets. Otherwise, we'd never get a single trade done.

In traditional markets, you have T plus-3 settlement back in the day. You had DTC infrastructure to help settle transactions. None of this existed, and still doesn't, frankly, exist in cryptocurrency today. A lot of it was, how do we do this? How do we settle this? Really, we just made up our own best practices as to what needs to happen and a lot of those we still follow today.

JUSTINE UNDERHILL: What is it like? Is it somebody will call you up on the phone? What types of clients do you have? How does that exactly work?

MICHAEL MORO: Back in the day, a lot of crypto anarchists; guys who wanted to stay off the radar of the federal government, who also had a very macro bearish view of the world-- central bank policies cannot possibly last, debt levels are piling up. We need a non-sovereign storer of value. On the buy side, this idea of Bitcoin possibly going to zero, which still exists today, was much more of a real possibility in 2013.

This idea of Bitcoin could go 100x or it could go to zero-- that very binary hit or miss outcome was really, really-- it fit the portfolio of Silicon Valley venture capitalists perfectly. Because they're used to making bets across a whole bunch of different companies that might become zero or could become Facebook.

This asymmetric risk reward profile fit that perfectly. A lot of our buyers in the early day were just that-- were basically the Silicon Valley venture capitalists and venture capital firms that actually started to take that risk reward balance in Bitcoin. Today, it's a lot different. A lot of the early, early guys may have at least sold a portion or a majority of their original Bitcoin holdings. Hopefully, they're retired and living a good life somewhere around the world.

JUSTINE UNDERHILL: Would you say that the size of the trades itself has changed over the years?

MICHAEL MORO: Certainly. As the buy side appetite has grown, and, frankly, as the price of Bitcoin has grown, I think that the average size of the transaction has definitely grown. I think early on, we were probably doing, I don't even know, $100,000, $200,000 trades. Then now we're in the millions. Certainly from an appetite perspective, I think that that has certainly advanced as well.

JUSTINE UNDERHILL: In the early days-- 2013-- how would you go about vetting your clients? Was that a big hurdle that you faced?

MICHAEL MORO: Tremendous. Tremendous. As I mentioned the early on, a lot of the Bitcoin holders were the crypto anarchists. Just this idea of AML KYC, that like ran against their whole ethos. The idea of giving up your photo ID, social security number, whatever it was to get vetted from Genesis, which is a broker dealer-- we have to do this.

We have to do this, otherwise you can't transact with us. I think that was a hurdle for both of us. For us to get used to the idea that clients didn't want to be on board at AML KYC and for them to learn that if they want to sell big blocks and use Genesis, you have to go through this process and trust us with your personal information. We used to have back in the day people that would show up at our office with a suitcase full of cash.

Say, I want to buy some Bitcoin. I'm not telling you who I am, but here's my proof of funds. They'd open up their briefcase and there's $100 bills. Obviously, we'd have to kindly turn away the customer and say, I'm sorry, we cannot do cash transactions. We would have to collect all your personal information-- all the background checks and things like that before you can transact with us. That was really like a wakeup call for us as to what the world was like back in the day.

JUSTINE UNDERHILL: Moro attributes his friend Barry Silbert's enthusiasm for Bitcoin to his own crypto awakening. Moro's background in asset backed securities prompted him to see the importance of a secure broker dealer for crypto assets before others did. This early opportunity identification helped Moro bring legitimacy to the crypto space and set an example for the rest of the industry to follow. For Real Vision, I'm Justine Underhill.