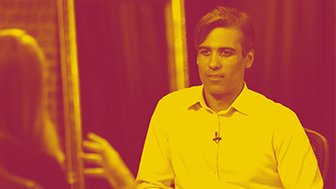 Alan Shaw, CMT, former president of the CMT Association, and Ralph Acampora, CMT, senior managing director at Altaira Ltd., talk about their first meeting in 1969, working together in the 1970s, and how the two charting legends brought a new method of analysis to the finance industry. This video is excerpted from a piece published on Real Vision on April 12, 2019 entitled "The Godfathers of Technical Analysis."

JUSTINE UNDERHILL: Welcome to How I Got My Start in Finance. In this episode, we hear from Alan Shaw, one of the godfathers of modern technical analysis. He chats with Ralph Acampora about the genesis of the technical analysis community.

RALPH ACAMPORA: Alan, you remember when I first met you?

ALAN SHAW: At the New York Institute of Finance.

RALPH ACAMPORA: And you asked me if I could do a point and figure chart.

ALAN SHAW: I asked a very important question. You were the only person in the room that raised his hand so dramatically. And you went up to the backboard and wrote the answer down. And I asked you if you were looking for a job. And you said, I'm always open. And so that was it. 1969. Then you came to work at Harris Upham.

RALPH ACAMPORA: Yes. Yes. And I had the pleasure of meeting your boss- a man by the name of Ralph Rotnem. It seems like all great technicians are named Ralph. I don't know why.

ALAN SHAW: Oh, that's right. Well, he was not really a technician. But he very much called himself a student of the market, which is really what a technical analyst is.

RALPH ACAMPORA: Well, but he left some valuable stuff to all of us, hasn't he, in the old days?

ALAN SHAW: Yeah, he was the president of the New York Society of Security Analysts. He was very good friends with some of the leading technical students, Edmund Tabell, Kenneth Ward.

RALPH ACAMPORA: These were all the old-time technicians. It was way before our time, in fact.

ALAN SHAW: Yeah, they were as old as I am now at that time.

ALAN SHAW: He certainly did.

RALPH ACAMPORA: Yes. And what was that all about?

ALAN SHAW: Well, see, he found a strong correlation to the length of women's skirts and the height of the stock market. And he presented that indicator to the public when Twiggy was around, and the skirts couldn't go any higher. And sure enough, the market topped out the next year.

RALPH ACAMPORA: Yeah. That was interesting because that was literally behavioral finance, which was what we at the universities call now behavioral finance. But yes, that was one of the forms. Didn't he do some cycle work, like presidential cycle?

ALAN SHAW: Oh, he did all that stuff. He could tell you what happened to the stock market in the minutes after the battleship Maine was sunk.

RALPH ACAMPORA: Yeah. Yeah, that's fantastic. Going back to the old days, I walked into the office working with you, and I brought with me a young guy by the name of Johnny Brooks. Johnny Brooks and I were so excited. Actually, we were jealous, Alan. We were jealous of the fundamental analysts. In those days, the fundamental analysts at the New York Society of Security- would have breakout groups. Like the chemical analysts would meet once a month, then the drug analysts.

And we came to you and said, Alan, we'd like to start a group where maybe we have tech people meet once a month. And you were very supportive of that.

ALAN SHAW: Well, my first impression, though, is how that was already something that was tried. And unfortunately, it was without success. A bunch, about five guys got together. I was one of them, at Fusco's Bar once a month. And it turned into a- you're an idiot, you're a jackass, that's not going to work type of session. And that, to me, wasn't where I was going to learn anything.

RALPH ACAMPORA: That's why you sent me to Ralph Rotnem. And you said, young man, if we do this, you got to run it my way. I said yes, sir. And you said, there will be no discussions at the meeting. Whoever the monthly speaker is, you raise your hand politely, and you ask questions. Oh, I'll never forget that. And yes, sir. Yes, sir. And that's what Johnny and I did. In fact, his boss, John Greeley at Eastman Dillon, sent John to Merrill Lynch, Bob Farrell at Merrill Lynch, who ran the big department over there. And Bob Farrell became the first president of the organization. You were the second president.

ALAN SHAW: That's correct. And none of us had any idea that it would be such an incredible growth experience thereafter.

RALPH ACAMPORA: And you know what I found interesting, Alan? Because here you were at a very big firm, or we were, at Harris Upham, which morphed into Smith Barney years later. And here we had Merrill Lynch. And you two fellows, as important as you were, you never really actually sat up until the time the organization was started. And that's the key to what we've been doing. We're bringing people together and networking. I think that is so cool.

ALAN SHAW: That's correct. And if you look back, too, the thinking was, which we followed, that we would look for like practitioners who had some following, press wise or professionally wise, like Tony Tabell was our third president, et cetera, et cetera, et cetera. And that started to get other people thinking, too, that we're kind of doing our line of work. Maybe this is a group I should join.

RALPH ACAMPORA: Actually, the mandate that Johnny and I had- we were the youngest kids running around. I think Johnny was 26, and I was like 27, 28, whatever it was. And the mandate was we only had to have people who wrote a technical market letter for their firm. And we ran around, and we found 19 people. Those were the 19 original members. And years later, one of my students, John Murphy, wrote a book on intermarket analysis. And he wasn't an equity guy, didn't write a market letter. And he wanted to become a member. So we had to change the constitution to bring him in. And that's how the organization grew, as more and more people with different backgrounds came in.

Do you know the most important date in modern technical analysis history is Friday, December 17, 2004? You weren't there, Alan. I was there with a couple of guys from our organization. And we were fighting the Sarbanes-Oxley law that came out in January of that year. And Sarbanes-Oxley law said that all the analysts, that's us, had to take two new tests, series 86 and 87. 87, new rules and regulations- no problems. You got to take that. But 86 demanded that all us technicians have levels 1 and 2 of the CFA. Boy, I was ripping mad.

I said, all of a sudden, after all these years of being an technical analyst, they're putting a gun to my head. And I have to be partly fundamental? And I went back to the market, which called the Market Technicians Association in those days. And then we just changed our name last year to CMT.

ALAN SHAW: That's because we got mixed up with the Metropolitan Transit Authority.

RALPH ACAMPORA: Yeah, the MTA. Well, anyway, I went back to the organization. Give me all the money in treasury. I got to throw it at this problem. Because if we don't win this problem, we don't win this debate, we shouldn't have the right to represent anybody professionally. And the long story is after the body of knowledge and all of this stuff that we created was myself, David Krell, who was also a past president of the MTA, Ken Tower was also a past president of the organization, Barry Sine, who wasn't a past president but very involved, they participated. Dave spoke three minutes on the history of technical analysis, talked about Charlie Dow. Ken talked three minutes on our organization and how professional we were. And Barry spoke three minutes on our certification exam. And I had the last five minutes, Alan.

And I get up in front of these lawyers. I said, imagine if you lawyers are being mandated to take the medical boards. They looked at me like I was crazy. I said assuming you could pass that exam, you would never use that body of knowledge in your work as lawyers every day. And they were saying, yeah. Well, I said, well, that's what you're asking me to do. Please, test us on our body of knowledge. And with that, one of the lawyers jumps up and shoves a chart in my face and says, oh, Ralph, you're a nice guy. We see on television. He said, what's fact on this chart?

And my feet are like rubber. I said, oh, my God, he's asking me a question. Then I looked at the chart. I said, well, price is a fact. And his eyes got about this big. And I went like this to his chest. I said, earnings are an estimate. You restate earnings, you never restate this chart. He said, man, that's the best answer I ever heard. I said, you better believe it. And three months later, the Securities Exchange came out, admission came out, amended Rule 344. And the official law of the land now, there are officially two analysts. One's a fundamental analyst who follows companies and has a CFA. And the other analyst is a technician who follows stocks and has a CMT. And that's where we are today. Thanks for the organization and the things that you and Bob Farrell and Ralph Rotnem and all have done for us. And here we are today.

JUSTINE UNDERHILL: From the classroom where they met to the most important day in the history of their discipline, Alan Shaw and Ralph Acampora have been technical analysis trailblazers. For Real Vision, I'm Justine Underhill.