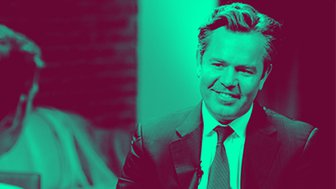 Keith McCullough, CEO of Hedgeye, talks about how he used…

How I Got My Start in Finance · Featuring Kieran Goodwin

Kieran Goodwin, co-founder of Panning Capital Management, talks with Tony Greer of The Morning Navigator about how the combination of Goodwin’s penchant for gambling and reading Michael Lewis's "Liar’s Poker," piqued his interest in finance. He talks about how he used what he learned selling Christmas trees to find success trading derivatives. This video is excerpted from a piece published on Real Vision on April 16, 2019 entitled "The Rise and Fall of Credit Vol."

JUSTINE UNDERHILL: Welcome to How I Got My Start in Finance. In this episode, co-founder of Panning Capital Kieran Goodwin tells Tony Greer how a book, an unexpected business opportunity, and his interest in programming led to a pioneering career in the world of credit default swaps trading.

KIERAN GOODWIN: Well, I really like basketball. Growing up, I played in high school. And Duke actually went to the finals my junior year, 1986--

KIERAN GOODWIN: --which was the first time-- actually, it was Johnny Dawkins, who--

KIERAN GOODWIN: In high school, right. My junior year in high school, it was 1986. Johnny Dawkins was the star, who actually just coached against Coach K last Sunday at UCSF. Just saw him, had an amazing game. So that was Dick Vitale prime time, when he was really ascending as a star commentator, and he would constantly talk about how the Cameron Crazies and all these kids give an amazing amount of support to Duke and cheer, but they're future doctors and lawyers.

And from the Northeast, I don't know about you, but I never really heard of Duke outside of basketball. I didn't really know that it was a great school. So that summer, we did-- saw some colleges. We did a little southern tour, went to UVA and UNC and Duke and a couple other schools. And you when you get on that campus for the first time, it's an amazing place.

Some of the best decisions I've made in my life come from the gut, when you're like, this is right. So I walked on there, and it was like, well, this is amazing. I actually didn't end up-- I ended up applying early to Brown, got deferred, didn't get in, but got into Duke. So it was like-- I'm glad it happened that way.

TONY GREER: Yeah. Yeah, that turned out well. So when you got out, were you making a beeline for Wall Street? Did you know that that was in your blood and where you wanted to go? Or were you feeling out your options?

KIERAN GOODWIN: Well, I was born in Brooklyn. I think I'm fifth-generation probably boroughs mostly-- some Lower East Side. So I have a lot of New York ties, so I knew I wanted to come back to New York City after college. And my junior year, we were just getting back in the beginning of the semester in January. A good friend of mine, a great friend of both of ours, Keith Melchionni, he gave me a book. He's like, my dad got this for me. He's mentioned in the book, and I think you might like it. And Keith is pretty much-- what's his guy? Nelson DeMille. He's like Nelson DeMille guy.

KIERAN GOODWIN: So this was-- the book was Liar's Poker. So I'm a junior. We're having a keg party at the fraternity, which is like the 600th keg party. I've seen this before. So I'm sitting there. It's about 7, 8 o'clock at night, and I start reading it. And I literally read it in one sitting. I read it from 8:00 to whenever, 11:00. It's a quick read. Most of the stuff at that point I didn't understand as far as mortgage securitization.

But I was like, wow, this speaks to me, in the sense that I always liked to gamble from when I was-- my grandparents taught me to play poker when I was probably seven or eight. And we would play just games for money in the family, whether it was Yahtzee or cards, or we'd bet on the Kentucky Derby, whatever it was. There was just a--

TONY GREER: Rain drops, whatever it was.

KIERAN GOODWIN: Yeah. So I had that. And I always liked angles. I was looking for-- I don't even know the word for it at the time, but arbitrages, in a sense. In college, I-- my good friend's-- a good friend of my father's, he owned a bar in Brooklyn, and we were in the city visiting my grandparents. And I would notice people were selling Christmas trees for like $50 at the time, in the late '80s. And so I went back to Redding, and we had a Christmas tree farm a couple miles from my house. How much can I get a tree for? It was like $15.

So then I rented a truck the next year. Got a buddy of mine. We got 50 trees, drove it up there, and sold them in front. It was good until I learned two lessons. There was an arbitrage there. So I think our all-in costs were like 20-odd dollars, like $22. We were selling them for $50. But then, the best lesson of it, though, was, as you're getting up to Christmas day, 23rd, 24th-- we were there for like a week. We might have had 100 trees. I can't even remember. But you start getting bid for trees, and I'm holding-- but I have an option. A tree is like an option, and on the 25th, it expires. It's worthless.

KIERAN GOODWIN: So people were bidding me like $35, and I'm holding price, whatever. I should've just been hitting every $35, $30.

KIERAN GOODWIN: Because I was still making money. And that was-- I remember thinking when I started getting a risk position-- first started to be able to handle risk positions, I was thinking of that moment. Sometimes any bid's a good bid.

TONY GREER: Yeah. That's really interesting. I love the fact that you've got this drive in you and you're that entrepreneurial and calculated. And you go from your fraternity reading Liar's Poker, and next thing you know, you're on credit derivatives desk on Wall Street and a pioneer in CDS trading.

KIERAN GOODWIN: Yeah. It wasn't as much of a straight line, but--

TONY GREER: Right. No, I know that. I know that. And that's why we're here. We're going to go through a little bit of the path of how you got there. So tell me about your earliest Wall Street days and a little bit about-- was it just in credit? When did you get your exposure to credit derivatives? When did you start taking on risk, going from a young kid out of college on the desk to becoming the guy that was-- OK, Kieran's got a book of his own now. But tell me about the early days, the transition from Duke to, OK, I'm on the desk now. Here we go. And I'm selling Christmas trees.

KIERAN GOODWIN: Right, exactly. So I was a computer science major. So I like math. I like logic, computer programming. And I felt like, even though that skill set I wasn't using right away, I always felt like understanding logic and problem solving that you learn in coding is helpful. But my first job, I was working in the equity department at Smith Barney. And we were a group that was doing all the stock buybacks.

So I was an analyst. Then I became a sales trader. And I wasn't really using those skills. And I started reading about or hearing about derivatives, whether it was in a journal or just tangentially. So I tried to get a job in equity derivatives and start hearing about option theory. And I'm like, oh, that's math, and I can understand that. And there were no jobs.

So then I got a job- Smith Barney started an interest rate desk and a straight derivative desk. So I got a job up there, and I was like the junior trader, let's say. But it was just more working with a model and pricing swaps and swaptions. It didn't really have risk. And then, the head trader got fired. So then I was thrown into the seat of having risk and having to deal with that, which was baptism by fire.

TONY GREER: Yeah, there it is.

KIERAN GOODWIN: Which was great, but scary at the same time when you're like 25 years old. So that trader then went back to where he was from, Citibank. Eventually, our whole-- Smith Barney did a whole tack on fixed income. They shut down derivatives, and they asked me to trade treasury options. But then I also had a job with this guy at Citibank doing credit derivatives, which was totally new at the time.

He soon abandoned me, so I was by myself. And he abandoned me because there was no business. So being a credit derivative trader in 1995 meant you basically spent a lot of time talking to yourself. So I'd come in every day. I'd have a book about option theory. I'd learn about-- I'd read about credit. I'd go talk to the corporate bond traders, the loan traders, and they would just pretty much shoo me off after me bothering them for 15, 20 minutes.

TONY GREER: Phone was not ringing off the hook yet.

KIERAN GOODWIN: No. But it was a good time in the sense-- I was young, and I had a lot of time to study and read and try to figure things out for myself and observe.

JUSTINE UNDERHILL: After reading Michael Lewis's Liar's Poker, Kieran Goodwin's interests shifted to finance. He even used psychology behind options trading to sell Christmas trees. It's all the small things that helped shaped his view of the world of credit. For Real Vision, I'm Justine Underhill.