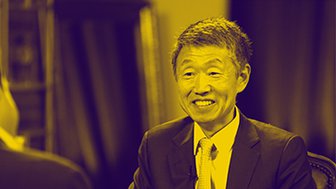 Weijian Shan, former professor at Wharton and the manager of…

How I Got My Start in Finance · Featuring Christian Alexander

Chris Alexander, founder of Macro Link Agency, joins Roger Hirst to discuss how he developed a powerful network of financial industry professionals. Alexander talks about how he got his break in the finance world, how he eventually monetized that network, and the unique perspective he has as the "Jerry Maguire of the hedge fund industry." This video is excerpted from a piece published on Real Vision on February 12, 2019 entitled, "The Future of Macro Hedge Funds."

JUSTINE UNDERHILL: Welcome to Real Vision's How I Got My Start in Finance. In this episode, Chris Alexander sits down with Real Vision's Roger Hirst to talk career goals and the rocky road to success.

CHRIS ALEXANDER: Came to New York, I was here on a business trip. And I saw the city, and it seemed as dissimilar to home as anything I'd ever seen. And I thought to myself, money comes and goes. I may make it or lose it. But if I moved there, I would always have these stories and the adventures of that whole bright lights, big city, the thing that's as opposite to my hometown in California as possible. And my ambition at that point was to come here, make some money, and return home.

So I came here just to see the world really, and I guess that was in '98. And I got a call from a headhunter at the time who explained to me that I was at the point where if I was interviewing at a place that I didn't want to go or even at Goldman, if somebody asked me, hey, what are the questions that you wanted to ask, I could say, look, these are the questions I wanted you to ask and here's my answers.

Which, in the end, after the usual full physical exam at Goldman, I ended up getting the job there to cover all of the places in the US, or all the places in the Northeast that nobody wanted. So Pittsburgh, Hershey, Toronto, Cleveland, Columbus, Valley Forge. I'm missing a few, but it was all the places that you have to get up at 6:00 AM, go to the airport and fly to some place, eat breakfast, lunch, and dinner, and then get home at about 11:00.

So in '03, I took a business trip to Asia, and I had the same impulse that I had when I came to see New York, which was, hey, I'm not sure how that's going to work out, but I want to move there. And if the reentry isn't graceful, who cares? I'll still have the experience. And so I asked for that assignment and was granted it in '04 to cover macro funds.

And as you may know, if you live in Asia and you cover macro funds and work at Goldman, you have a very good chance of getting to know a couple of hedge fund founders because they're going to talk to somebody at Goldman, somebody at Morgan Stanley, and somebody who knows what they're doing between dinner time and the Nikkei open. So that decision put me in the frame of getting to know the guys that have their name on the front door of hedge funds.

And so I wasn't really able to build out a bigger network than what I had at Goldman. And when they booted me out, when I got to JP, I thought, what I'll do is what I had always aspired to do at Goldman, but the path there was definitely not without obstacles. And at JP, it felt pretty open, at least in equities. That didn't last very long because I wasn't super well appreciated there, and my next move was to SocGen, where it was very clear that the most valuable compensation they had was unfettered access to important people.

So that was the first step towards doing something entrepreneurial because it was pretty obvious to me that I may not find another form of employment that's enjoyable. And further, even if I did, those relationships I had would be torn apart at the seams by all the other people that claim to know them. And so I made the decision to set out and do something on my own.

ROGER HIRST: And so now you've got this kind of- it's a network.

ROGER HIRST: You can write a macro newsletter to this network. You interconnect the network, so you're deeply embedded in that business model. What has been changing? Because everyone talks about hedge funds, and the people that you talked about and I talked about in the '90s and 2000s, all these legends of the 90s, but that's a changing world now. Today, when we look at the hedge fund world, the hedge funds themselves are changing, the business model certainly changed. So what have you been seeing in terms of when you've been trying to place people? So how's that model been moving with the times, and what's been driving it?

CHRIS ALEXANDER: I'll say one thing, even going back to where I left off, which is at my last real form of employment, it was clear to me that I didn't have the same resources as I had at a place like Goldman, where you'd have an unlimited number of intelligent analysts, and further, you have an unlimited number of intelligent markets traders that you can use as a point of contact or as a point of relevancy to gain contact with important people at hedge funds. That said, those meetings are about the Dominic Wilson person or whomever is the relevant party that you're bringing in there to be the content provider, and largely, you're just there to carry the spiral-bound notebooks.

So when I started the business, I thought to myself, what are the available assets that I have that are impossible and/or not available to others? And it stood out to me that having a network of 15 hedge fund founders that you've talked to or that I talked to makes me unique versus most people in the market, and then having insight into the body of consensus and how that's evolving in time.

So if everybody's long something and two of them exit, I can say, hey, look, there's been a breakdown in the-- the unanimity of agreement about that spot is starting to shake a bit. Here are the two things that people are starting to worry about that I think are interesting that I know about. Here are the trends in the industry that-- and the additional thing is, here are the trends in the industry that would be politically impolite to say at a bank, but that I can say because if it doesn't fly with somebody, they just won't talk to me.

I'm not going to fire myself, so therefore, I don't have to worry about the ramifications of how does that play to my manager. So that left me in a spot of gaining, say, better, more honest interaction, and further, having deeper insight into how the funds operate and also being able to think and produce content about things that normally would be unspeakable, even if they're totally appropriate to discuss.

JUSTINE UNDERHILL: So Chris Alexander got his start by covering all the places that nobody else wanted to and eventually built a strong enough network of hedge fund managers to monetize that network. For Real Vision, I'm Justine Underhill.