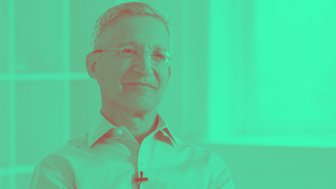 While earning a degree in physics from MIT, Josh S.…

How I Got My Start in Finance · Featuring Marc Cohodes

From ditching school to work part-time as an options trader, to trading stocks from a summer camp payphone, Marc Cohodes had an unconventional start in finance. He sits down with Real Vision's Grant Williams to reflect on his formative years, and on how he became one of the most feared short-sellers on Wall Street. The full version of the piece which this is excerpted from was published on December 15, 2017.

JUSTINE UNDERHILL: Welcome to Real Vision's How I Got My Start in Finance. This is where we give you a rare look at how some of the biggest names in the finance industry began their careers. And the best part? You get to hear it all firsthand.

In this episode, legendary short seller Marc Cohodes discusses a range of early yet influential factors on his career, from his second grade report card to meeting Jim Chanos in the 1980s. Marc is one of the most feared short sellers on the street and is best known for publicly calling out fraudulent companies. Let's find out how he began that journey.

GRANT WILLIAMS: I want to start at the very beginning and talk about how you got into the business and how you took your first steps and then the journey that made you go, you know what? This is what I'm going to do. I want to become a short seller. Maybe it wasn't even a conscious decision.

MARC COHODES: Well, it really all started, I think, in high school. I was never a good student. I always carry around my second grade report card or a picture of it, where I think the teacher thought I was going to end up in jail or working at a car wash or something like that. I probably read it about once a month.

And so I was taking a tenth grade economics class in high school. And the teacher, a guy named Dennis Sullivan-- I know where he is right now. He created something called the ECON Corp where we invested in stocks. And I got the bug then. And I don't know. It's just been with me since.

I used to work a little bit on Midwest Options Exchange in the '70s in Chicago. I used to ditch school and do this part-time.

GRANT WILLIAMS: People watching this won't understand how that would even be possible because it was such a different time back then. How do you have a part-time job on an options exchange, for the people watching this now? How does that world exist?

MARC COHODES: It probably doesn't exist anymore. I mean, it's when you used to play hooky from school, and parents wouldn't care and wouldn't know. And I used to trade stocks for myself, and it was crazy. It was nuts.

I used to be a counselor at a boys' camp in Minong, Wisconsin, and I used to trade from a payphone in a counselors' cabinet, making $600 a summer being the sailing instructor. Shit was different back then, but I had a blast. And I knew back then I had the bug.

It wasn't as much the short stuff, till I ended up getting a job at the Northern Trust, and I met a guy named Paul Landini. And he followed Warner Communications, and he followed Bally Manufacturing, which was a Chicago company which made pinball machines. And he said that Warner was going to kill Bally. People were going to start playing video games.

GRANT WILLIAMS: But was that-- because I remember talking to Carl Best about this. And he said his first short trade went to zero. And he said it was the worst thing that could possibly ever have happened to him. Because he lost everything on his next one.

MARC COHODES: Well, I realized at that time that this isn't for everyone, and that I'm genetically mutated to have the short-selling gene, which is kind of a curse. I mean, I had plenty of longs, and I've done well with longs. But short stuff has really turned into my passion.

And I mean, I met a young Jim Chanos. I was working at the Northern Trust in '83, and a very, very, very young Jim Chanos walked in there. And I'll never forget it. You know, the bank was long a ton of this thing called Baldwin United. And Chanos worked for Gilford. And he was saying, this Baldwin United is a massive fraud. And the director of research was pals with this Morley Thompson, who ran Baldwin. And he said, Chanos is full of shit, Chanos is full of shit. And the stock was rated strongest buy. And I looked through all my accounts after hearing Chanos, and whatever account owned the stock, I sold it.

GRANT WILLIAMS: But what was it that made-- because you're a young guy in a new industry, surrounded by people who-- you bestow respect to them until you learn otherwise, at that age. What was it that Chanos said that made you go, you know what, I believe this guy, not the guys I should believe.

MARC COHODES: Well, I didn't know Chanos from shit at the time. He was nothing. He was just starting out, much like myself. But the one rule of thumb that always-- and I hold it to this day-- is Chanos made so much sense when he was unwinding this Baldwin United business, that it was a fraud. It made so much sense. And then I overlay it to the long story, which was so convoluted and made so little sense. And you hear the long story, your eyes start spinning. But the numbers were there, so people justified owning the stock. But Chanos's story was simple, it was right, it was lethal. And I said to myself, if this guy Chanos is right, this stock's going to go to zero.

And you know, I was managing personal trust accounts. I was the youngest guy in the history of the Northern Trust to ever manage money. And I just said, although I don't know these people who I manage money for, it's a great responsibility to manage others' money. I'm not going to sit around with the stock, and I don't give a fuck what the bank says. So I sold the stock. I sold the stock, which was high. And then as this thing started unwind and revelations came out, the company went out of business. And the bank downgraded Baldwin United at 3. And I think I sold this thing in the 30s. And I'll never forget it. I'll never forget it.

Forget Chanos's Enron call. Forget that, right? Others saw it. Others had it. His Baldwin United call was probably one of the best calls I've ever seen. I'll never forget it. It left a mark for me in '83, '84.

GRANT WILLIAMS: Here we are 35 years later, and you're still--

MARC COHODES: Exactly. I mean, to me, it's always Baldwin United. I mean, then we worked on Coleco, with the Adam and all these various things back then. And life back then, shorting stocks, even though the market's probably up about 10 times since. The market back then to short stocks was a whole lot easier than it is now.

GRANT WILLIAMS: Was it the relief that you'd dodged that bullet, or was it excitement that, wow, this is--

But it was the relief that I got people out, that I was doing my job. But it was excitement that I analyzed this thing properly, that although the herd said to be in, I said, I'm not going to be in because the story makes such little sense.

JUSTINE UNDERHILL: Famed short seller Mark Cohodes caught the finance bug at an early age. He used to skip high school classes to work at the Chicago Options Exchange, and even stocked arcade venues to pick up on key trends in the gaming industry.

Mark's passion and hard work eventually led to some major wins, including successful bets against companies like Valiant and Home Capital Group. Hopefully his second grade teacher is proud.