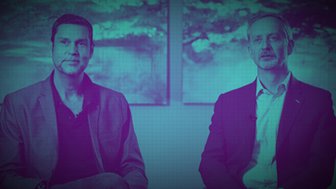 Raoul and Julian tell the story behind Real Vision’s most…

What do you get with Macro Insiders?

What do you get with Macro Insiders?

What is the Value of Macro Analysis?

What is the Value of Macro Analysis?

How I Use the Dollar Cycle to my Advantage

How I Use the Dollar Cycle to my Advantage

Some of my Investing Secrets

Some of my Investing Secrets

My Framework for Spotting Bubbles

My Framework for Spotting Bubbles

My Great Edge in Investing

My Great Edge in Investing

What will the Fed do — and will it matter? In the July episode of “Insider Talks,” Raoul Pal and Julian Brigden debate the likelihood of a full-on recession versus a recovery from the current slowdown. They also speak about which way the dollar will break, and which assets one wants to own over the next five years. Filmed on July 2, 2019 and made available to Macro Insiders subscribers on July 5.

RAOUL PAL: Some of you may know that I publish not only the Global Macro Investor, which is my very expensive institutional research service, but also Macro Insiders. Macro Insiders is my retail macro advisory business that I do with Julian Brigden. Now, what's interesting is it's broken up into a number of parts. But one of the parts we do every month is we have a video of Julian and I discussing how we see the macro landscape.

Now ordinarily, I don't put these on the platform, because they're not the visual quality that you used to have for Real Vision. It's more about the discussion. But Julian and I had such a great discussion a couple of weeks ago that I thought you had to see. Because there's a real debate. He doesn't really agree with me, we both understand each other's points of view, and we can both change our minds. But Julian has a different perspective so it's super important to bring you that debate so you can really get an idea of where the risks lights of my view, or where the risks lights of Julian's view.

JULIAN BRIGDEN: I am okay, mate. Look, it's not an easy market, I just had a call with a big patron client. And we're looking at a lot of things, we haven't pulled the trigger on them at the moment, very few trades even for the whatever we call the pros. But I can taste it. I think I can taste it. I think things are lining up. We pulled a few positions, there are some things that are working, gold is working really, really nicely. The gold miners that we recommended as well is working nicely. We got stopped out of some stuff. Now the question is, is it stop and reverse?

So, the ADXY, the short dollar against the Asian currencies, obviously got blown out after the China thing. But it wasn't awful. We're stopped out of our long Treasury trade. We haven't reversed it yet. Really. But it's quite tough, because you've got these super conflicting signals. The biggest thing that I've been talking to the institutional clients about is when I look at this thing, and to use that Sesame Street expression, one of these things is not like the other one of these things just does not belong.

I was looking at the spread between Deck 19 and Deck 20 euro/dollars there. This is all a bit overly complex for a number of people, but it's extremes that we saw ahead of 2000 recession, and 2006-2007. Now, that means the bond market ain't just betting on a slowdown, it's betting on a bloody big recession. And that's potentially valid. We can see things in the real economy, which look bloody dire. But the equity market isn't there. And the Fed just told you, at the last FOMC, that their overriding priority was extending the cycle.

Now, they haven't delivered to extend the cycle. I don't know whether they know how much they need to extend the cycle. But if they extend the cycle, then the equity market is right. And ultimately, as we saw in 2016, the bond market is wrong. And it could be wrong in a major bloody way. We use that stupid little metric on moving averages in the S&P and they've worked, and it's held up. We got the buy signal. You was meant to be betting on a higher equity market. You can say that they're all smoking crack. But it could be the bond market that is utterly wrong.

And if the dollar starts- I don't know, what do you think here on this bond market?

JULIAN BRIGDEN: Which does mean that the risk reward is not to be long things like TLT, which is basically a Keynesian heritage.

RAOUL PAL: Yes, it's the short end. Now, is there a chance for backup? Yes, I've taken tons of profits all over the place on all this stuff, it had been- One of the better trades I've ever done was this whole fixed income trade over the last nine months. And I'm desperate to put it back on again. And I'm waiting, and my DeMark counts give me that it should stop bouncing this week to next week. Maybe everyone starts closing out of longs going into the Fed after that. So, I think I think rates go to zero.

I think we're in the full cycle. I think they go to zero and they go negative in the US. So, I think every single opportunity to buy a bond at whatever price is a great opportunity. I think, also, I'm now probably at- the first part of the trade, I was at a hundred percent conviction. The most conviction I've ever had, I'm now shifted to about 70% conviction. Because if the dollar goes up, which it won't go one way or the bloody other. But if it goes up, which I think it's likely to do once that the debt ceiling is raised, and I think and also the first cuts in 2000s, once they had the first cut, the dollar rocketed. If that's the case, then I'm going back to a hundred percent chance that we go to zero rates. But move there very quickly, I still think they'll cut 100 basis points this year.

So, I'm at the far end, and I've spoken at several big macro events. And there's a few people in my camp. And there's one or two big guys in London. There's a couple of guys in the West Coast, and there's maybe one in New York, almost everybody else has been one way or the other- everybody wants to fade bonds right now, I know you're itching too, as a trade that might will work. I've no idea. So, that's my view. And unless I see something different, any change, I'm with that view.

JULIAN BRIGDEN: We're both in the same place. We're both taking profits, we were both long. Treasuries, we're betting on lower yields. And we were both right. It's one of those times I think great minds think alike. Call it what the hell you will, but it was certainly a high conviction trade for both of us. I think we're both out. We're both looking for a retracement in a high yields, lower bonds. Neither sure quite how far it goes. My bet is it's not part of the process going to zero. It's part of the process of going to full ultimately, over a number of years. But the fact is we're both looking for a backup.

So, at this point, neither of us would be long certainly TLT. There's no risk reward on that.

JULIAN BRIGDEN: No, I was going to say I don't know whether we disagree necessarily on EDs, on the euro/dollars. So, the front end, that's fine. I think it's a great place to park some cash. I am a little concerned. I will be honest with you, Raoul, about the July FOMC meeting. Because what I am hearing from my policy contacts is that the base case isn't 50. Now, do the Fed end up cutting 100? Doesn't really matter. What matters is timing. And there's been times in the past where the Fed's cocked it up.