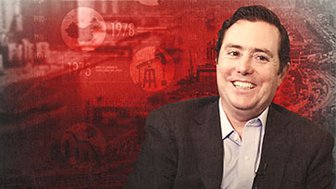 John Burbank, CEO of Passport Capital, tells Alex Gurevich how starting his career at an emerging market hedge fund right before the 1997 Asian financial crisis informed his views on market inefficiency. He connects this experience to his belief that events with no historical precedence present unmatched opportunity for asymmetric returns. This clip is excerpted from a video published on Real Vision on July 2, 2019 entitled, "Betting on a Major Inflection Point."

JOHN BURBANK: I came up with this view that maybe financial markets aren't nearly as smart on a longer term basis as you think. And that the very improbable or impossible happens on a regular basis.

I started in January '96 at a small hedge fund here in San Francisco doing emerging markets. And emerging markets were a rapidly new asset class. And so there's a lot of excitement about it. But I'm sitting in San Francisco doing merging markets, and our fund went up every month into from January '96 to October '97. And then EM collapsed, and people did not predict that. And the US kept doing well. It bottomed in '98 about a year later, and then the US went up to a bubble, and nobody predicted that.

So I guess early in my career in the '97, '98, '99 and 2000 period, what I saw was two things. A 90% crash in EM in a year in dollars and a huge bubble and things that didn't make any financial sense. What I saw was it's possible for liquidity to take prices very quickly to places nobody ever predicted. And I came up with this view that maybe financial markets aren't nearly as smart on a longer term basis as you think. And that the very improbable or impossible happens on a regular basis.

And so what I'd like to think- my hypothesis was maybe you can actually identify places that would create that asymmetrical or high leverage situations, but they had to be things that had never happened before. Because essentially, people look backwards and extrapolate forward. They look at a chart backwards and they think, oh, if it's down, it's going to go up, if it's up, it's going to go down. They regress to the mean, basically. But the world moves forward, the world progresses.

And essentially, the other principle is that, I like to say price is a liar, meaning if the massive liquidity has moved so much to one direction, it's pricing in something, but it's not actually true or it's not going to be true in a month a year, two years, the liquidity is going to change directions. And therefore, you're going to have a chance to either make or lose a lot of money. So what I've tried to do is to understand many different asset classes, many different markets to put together an understanding of where prices are, where liquidity is. And then match it to the fundamental changes in industries, and companies, and perspectives.

So if you go back to 2000, August of 2000 is when I started, just before the US market rolled over. We've had- the world has changed immensely. China wasn't even understood to be a demand driver for commodities until 2003. Tech was this bubble it was forecasting incredible promise, but that promise didn't really become I think, just kind of in markets until 2013, when growth stocks really started outperforming. Price is really just the balancing of liquidity. It is not the proper discounting of the future.

So the question is, where is liquidity now relative to where liquidity is going to be in the future for fundamental structural reasons? And so one way I use it is go back five years. Five years is a long time in the financial markets. So go back five years, in this case, 2014, middle 2014. And think about what the world thought was going to happen and compare it to where it is now. Go back five years before that, 2009, and think about what you thought about the world then versus where it was in 2014. I mean, five years is a long, long time. Because liquidity has a chance to move dramatically to one place or another.

And I'd say markets are more efficient now. I think the most powerful dominant companies in the world are generally us and some Chinese internet companies, and I don't see a lot of vulnerability there. And I think the liquidity of the S&P, the governance of the S&P, which is incredibly different than it was 10 years ago is reassuring to people. But now we have a difference, a big difference in the perspective of US Fed governors in long term structural trends that I think creates an unusual ones in a 10 year bet that anyone can make, which is really got my focus.