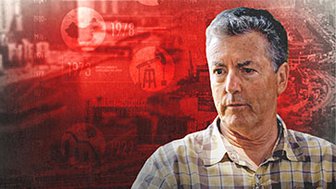 Ralph Acampora, CMT, senior managing director at Altaira Ltd., and Alan Shaw, CMT, former president of the CMT Association, discuss the impact introducing technical analysis has had on the global financial industry. From Ohio to Europe, Acampora and Shaw talk about the wide success they had sharing their craft with others. This video is excerpted from a piece published on Real Vision on April 12, 2019 entitled "The Godfathers of Technical Analysis."

RALPH ACAMPORA: And one day I'm having dinner with Lou. And I have a lot of respect for this guy. He's very bright and obviously, a very successful show. And I said to him, Lou, where did you get the word elf from? He said, I made it up. I said, why? And he said something- now, again, this is the 1980s. He said something so profound. He says, I don't think my viewing audience knows what you guys do for a living.

Talking about Wall Street with Lou Rukeyser. I was on the show as a regular panelist for 23 years, Alan.

ALAN SHAW: Oh, you were an elf.

RALPH ACAMPORA: Yeah, I was.

ALAN SHAW: I was an elf too.

RALPH ACAMPORA: That's the point I'm bringing up. He called us technicians elves. And one day I'm having dinner with Lou. And I have a lot of respect for this guy. He's very bright and obviously, a very successful show. And I said to him, Lou, where did you get the word elf from? He said, I made it up. I said, why? And he said something- now, again, this is the 1980s. He said something so profound. He says, I don't think my viewing audience knows what you guys do for a living.

ALAN SHAW: Yeah, he was.

RALPH ACAMPORA: There was no formal classes. At least, the organization that we started is formally pushing for education. But guys like me now are starting- I'm teaching at St. Thomas University in Minnesota. And you know what the dean said to me a year ago when she invited me over? She said, Ralph, we, the academics, we need a subject and a person who can bridge the academic world and the real world. I looked at her. I practically kissed her. I said, you're absolutely right. That's exactly what this subject does. They teach these kids all the economics and the quantitative analysis. But they don't know when to pull the trigger.

ALAN SHAW: Then they had to go through modern portfolio theory.

RALPH ACAMPORA: MPT, Modern- oh, yeah, and all that.

ALAN SHAW: Efficient market hypothesis, which was all proven poof.

ALAN SHAW: But it was at the bottom line critical of what we were doing. But only because they were ignorant.

ALAN SHAW: That's why it was our job to educate-

ALAN SHAW: -and so forth, even if we had to pull tricks and show them charts without names.

ALAN SHAW: Put in the mirror, and you could see the mirror image.

RALPH ACAMPORA: Yeah, then you'd say, well, look at this. I think you should be buying it.

ALAN SHAW: You've got it upside down.

ALAN SHAW: And also, the fact that we had such an impact outside of this country.

ALAN SHAW: I mean, I remember giving a speech before the Nippon, the Japanese Analysts Society. And that's where technical analysis really started charting. Japanese used the charts-

ALAN SHAW: -to plot the price of rice. Right, so back in the 1700s. And there are certain Japanese techniques today that called candlestick charting, which I've never really studied carefully but-

RALPH ACAMPORA: Still? It can be fun, Alan. It's really good.

ALAN SHAW: I know. But anyhow, yeah, I can remember going to Zurich and having a packed lunch group. And people just picked up on the discipline and followed us. And of course, we always had the chart package with us. What good is a chartist if he doesn't have his charts?

RALPH ACAMPORA: Don?t have the charts, of course.

ALAN SHAW: You can't make them visualize it.

RALPH ACAMPORA: That's right, exactly. My first trip to Japan- and I left you in 1980 with Kidder Peabody. Note the date, December 7th, 1981. It's the 40th anniversary of Pearl Harbor. I get off the plane. I don't know what I was doing. My firm didn't tell me bring a lot of cards because you pass out cards. They didn't tell me to take my shoes off.

RALPH ACAMPORA: I did everything wrong. But they were very gracious and very wonderful. And the Nippon Society of Technicians- and typical of the Japanese, they're very gracious, and they gave me a gift on the way. Listen to this, Alan.

ALAN SHAW: I bow to you.

RALPH ACAMPORA: And I'm on the plane. I'm opening the book. Of course, the Japanese read this way, and we read this way. And then I'm looking at it on the plane. I said, gee, it's all in Japanese. What am I going to do with it? Guess what I did with the book, Alan? I put it in our organization. Remember, in 1975, we started the library at the New York Institute of Finance? Well, I put the book in the library. This is 1981. Fast forward a couple of years, there's a young analyst at Merrill Lynch called Steve Nissen. He goes to the library, he sees the book. I didn't ask questions. He had it translated. And he brought candlesticks to the United States.

RALPH ACAMPORA: My book. Can you believe that?

ALAN SHAW: Why did he get any credit?

RALPH ACAMPORA: Isn't that exciting? Yeah, no, he gave the library credit. But he doesn't know- to this day, I've got to call him and tell him that was the book. Those are great stories.

RALPH ACAMPORA: And I remember going to Europe with you. And boy, the Europeans, they sucked it up, I think more so than a lot of Americans, the acceptance of technical, I think they-

ALAN SHAW: Well, I think the greatest thrill I ever had on that score was when we went to places- Amsterdam, Rotterdam, Zurich, Geneva, Lugano, Milan, or wherever, we would always have the chief investment officer or the chief portfolio manager. We didn't go to talk to an auto analyst or a bank analyst or whatever. We had the decision makers usually as our audience. And they caught on real fast that there was something to these trends and stuff like that that would help them manage risk and enhance reward. And then it was just a thrill to have been part of that.

RALPH ACAMPORA: Yeah. Well, I think I told you. A couple of weeks ago, I was invited to Cleveland, Ohio. And one of the salesmen, when we merged into Smith Barney in 1976, TJ Johnson, he said, hey, you got to come- I hadn't seen Johnson in 40 years. He said, come on out. He invites me out. I teach at a university. And we just have a million laughs. And we were just talking about the old days and how much fun it was. And in the front of this group, I'm giving the presentation. I said, TJ, you got to stand up. I said this is the fellow that brought- he brought technical analysis to Ohio because he dragged you and me around to meet the clients. And that was the first exposure, I think, in the 1970s, the late '70s.

ALAN SHAW: Correct. Spent a lot of time in Columbus.

RALPH ACAMPORA: Congratulations. You and I brought the world around. I'm proud of that. I'm proud of it. Then that's it, that's very- and you know what really amazed me?

ALAN SHAW: It's been a fascinating career.

RALPH ACAMPORA: Yes, and it's wonderful to look over my shoulder and see the younger fellows that are doing it. Obviously, they're a lot younger than we are. But they are the new giants, to use your phrase, giants standing on the shoulders of giants. You stood on Ralph Rotnem's shoulders. I stood on your shoulders. And they're standing on our shoulders. And they have this- and you know what I love about it? They have the same passion, desire, and focus on the subject as we did. And I'm very glad to pass the baton over. And they're doing wonderful things. And I got to tell you, I'm impressed as heck looking at their presentations, with all the beautiful graphics and everything.

ALAN SHAW: Oh, the PowerPoints and things like that. Sure.

RALPH ACAMPORA: And you were right. At the end of all this, they say, keep it simple.