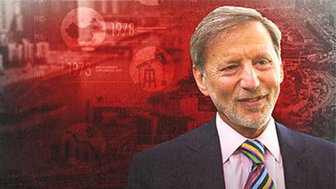 Ronan Ryan, president and founder of IEX, joins Tyler Neville to talk about how his career in technology intersected with the financial world. Despite not trading a day in his life, Ryan's influence on how the financial markets behave today is evident. This clip is excerpted from a video published on Real Vision on July 5, 2019 entitled "Phantom Liquidity and the Monopoly on Data Feeds."

The ironic thing is I've never traded a day in my life.

It's kind of a funny story. But I actually met Brad and worked for Brad at RBC before we formed IX. I had worked in the telecom sector for years. Had originally wanted to work on Wall Street-- it's in the book-- but I could not get a job on Wall Street. So I took a job and learned technology on the telecom side. And then it was around 2004 trading and technology started banging into each other. And by that, I mean people started to care how fast they traded. And I happened to be in the right place at the right time.

You make your luck, but you got to be lucky. I was at a company called Radiance. And I got a call one day from a black box trader not knowing what the hell a black box trader was. And had said, look, you know infrastructure. If I move my strategy from Kansas to New Jersey, can you colocate me, meaning put me in a data center near the exchanges? And I'm, like, yeah, of course we can do that.

And it was kind of a funny story in that he was complaining over the phone how it takes him 43 milliseconds to send a trade from Kansas and to receive acknowledgment of the trade. And I had no idea what a millisecond was, but I told the guy, I'm like, yeah, that sounds terrible. And when we moved him, we lowered it to 3.9 milliseconds, which sounds Fisher Price slow now 15 years later. But at the time, this guy was thrilled. He was so happy with the move.

He was introduced to me by a prime broker at a bulge bracket. And I went back to the prime broker at the bulge bracket and said, do you have any more of these black box traders? And I guess black box traders became high frequency traders. And I started building out a lot of environments for all these guys to move to New Jersey, connect to the exchanges. Then the exchanges themselves got into the business of selling space, and selling technology, and even selling circuits to connect their own clients to their competitors, which is bananas. But that's where it morphed to.

And I wanted to move to the business side and was meeting with a lot of brokers. And then one day, a broker called me and said, would you talk to the Royal Bank of Canada? And went in there met with about 17 people, which is how brokers interview, apparently. And just started working. And a few weeks later, we were working on the trading floor. I was working with Brad when we came up with the THOR smart order router. It was famous for arriving at all venues near simultaneous to get the best fill rate. That took off.

RBC did remarkably well. But then a lot of clients said to us, we can only use your technology when we trade with RBC. If you think of something bigger, we'll support you. And that really was it. So we kind of looked at it and said, well, the center of the ecosystem are the stock exchanges. So why don't we launch a stock exchange, as nuts as that sounds. None of us had ever even worked at a stock exchange. And then we set out to build one. And there was Brad and myself, John Thurlow, our COO, and Rob Park, our CTO, were the four first people who came up with this idea.

TYLER NEVILLE: One thing I want to talk about in this interview is market structure, which is an overarching-- if you want to go David Foster Wallace, it's the water that's around us in investing that no one really pays attention to. And I think it's such an important piece of the investment component-- that most portfolio managers don't understand market structure and liquidity. And it's a huge gap in knowledge. So can you take us back in time to the '90s, and start maybe there when regulations started coming in, and the market got fragmented? And give us a history there?

RONAN RYAN: Yeah, happy to. And before I do that, I will say this. It was remarkable to me when the book first came out, Flash Boys, in 2014, the buy side traders had become well enough versed in market structure. But because the book shone a light on equity market structure, a lot of the portfolio managers asked us to come in and present to them. And it was only then that I think they realized that the work of the trader itself, the buy side trader, was far more detective work than they had imagined.

I think people had thought with the electronification of everything, and you just plunk it in, an algo, set it, and forget it, and everything's fine-- and I think it was then that those PMs that showed an interest. And that really respected how many venues exist and how their traders source liquidity. So I guess it would go back to the '90s, the first thing was, like, reg ATS. ATS was alternative trading system. It just allowed more competition.

So today, you have stock exchanges and you have ATSs. Another word for ATS that most people know them as are called dark pools. But an ATS is basically a baby exchange, it's a less regulated exchange. And really, up until the '90s, you had the NASDAQ and the New York Stock Exchange. And you had the regional stock exchanges, but they had very little volume.

And then late '90s, you started with like the advent of like, Archipelago and INET. And those were 100% electronic exchanges. No humans-- and as was NASDAQ in fairness, which was already a few decades old. But the electronic application and the fragmentation of the market led itself to competition. And then in the early 2000s, there was Decimalization, where you could trade in penny wide increments.

And then also, what you did see a lot of is exchanges started to buy-- the incumbent exchanges started by these smaller guys. Why? Because they had better technology. So NASDAQ now runs an old island INET that technology. New York Stock Exchange bought Archipelago, didn't really adapt to the new technology. I think they've been rolling out their new Pillar platform for the last few years. But in essence, they bought those platforms because they didn't want to compete with them anymore, and they wanted to avail of their technology.

But with all of that-- I think there was a great book called Dark Pools, it was written by Scott Patterson, and it's all about market structure and the chronology-- I'm not sure if you've read it. If you haven't, you should read it, because it does a much better job of answering this question. But it does the entire chronology of the creation of INET and ARCA. And just even the messaging.

Like, everything now is all trading is done in like fixed protocol. Just the invention of fixed protocol, the dissemination of market data. But it lends itself to colocation, meaning-- colocation came about in the early 2000s, where the biggest proponent of latency of delay, a fancy way, they say propagation delay-- it just means the further away from the signal you are, the longer it takes you to get the signal.

You're in California versus New Jersey or New York versus New Jersey, which is kind of funny, because you have tons of exchanges like Chicago, Boston, New York, Philadelphia, IX. All 13 exchanges are in New Jersey. And all of them are in four buildings in Jersey. And that's more of two because people want to be in the same building as the exchange.

So from back when I was telling you before, 3.9 milliseconds mattered back in 2004, 2005. Now if you colocate, meaning you put your strategy in the same building as the exchange so you're as close as possible to the exchange, that latency is measured in nanoseconds, which are billionths of a second. Which is kind of again, comedic, because when people first moved to the building, they wanted the cable to connect to the matching ends of the exchange. Now it's gotten to the point where people are complaining that client A's cable is shorter than me, so they can get to the matching engine quicker than me. Which again, it's 11.9 inches I think, technically. But roughly a foot of cable equates to one nanosecond.

So what New York Stock Exchange got a lot of credit for is they measured the furthest cabinet away from their matching engine and gave everybody the same length of cable. Which people found interesting, but the one a lot of people haven't heard of I thought was really interesting is then the people closest to the matching engine started to ask the New York Stock Exchange to move them further away because a straighter cable had less light refraction. And must have been trillions of a second faster.

TYLER NEVILLE: So it got that ridiculous.

RONAN RYAN: Yeah, so it's gotten that ridiculous. And it continues to get more and more so. So every little increment of speed. Like, if you run a strategy that sole determinant of success is based on speed, if you fire in response to a signal at the exact same time as someone else, and you get into the matching engine a billionth of a second before them, well, then they're second, you're first. Or vice versa, you come in second and they're first, that equals success.

Cut that piece. I've never traded a day in my life, but I spend a lot of time talking with traders telling them how they should navigate a market. I'm not suggesting I tell them how to trade.

TYLER NEVILLE: But the funniest part is you're probably the most qualified trader on the Street by knowing all the technology.

RONAN RYAN: Just use a watered down Irish accent and a few f bombs and people go, I'll buy from him.

TYLER NEVILLE: Which you can drop on camera, by the way.