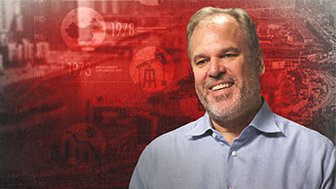 Stephen Auth, CIO of Federated Global Equities, joins Ed Harrison to discuss the timing of his career and the 1980s bull market. Auth details his introduction to financial markets, an opportunity that he took advantage of during the "Wild West of Wall Street," and how he staked out his reputation as a bull. This clip is excerpted from a video published on Real Vision on July 31, 2019 entitled, "Ignore the Bond Market?"

STEPHEN AUTH: The market cracked. We ended up doing pretty well. So sometimes it's luck in retrospect. Some maybe say divine providence. But I was sort of seemed to be in the right place at the right time at key moments in my career.

Yeah, I was a working class kid. My father was a steamfitter. I just needed a job when I get out of college, and I had bills to pay. So I came to Wall Street really from that perspective. It seemed like a place where I could make some money.

ED HARRISON: Tell me about the environment of Wall Street at that time when you first came on board.

STEPHEN AUTH: I was 1979 leading into the 1980s, which was the heyday of the LBOR and Michael Milken and that whole scene. So, yeah, it was a pretty wild and crazy day. It was wild days on Wall Street-- big commissions. I was on the investment side. So I was more paying those commissions. But it was a wild and woolly place, very different than the Wall Street of today I think.

ED HARRISON: And it's interesting. You came in at a very pivotal point in time when we were going from what I would consider a very difficult period in time, '79 through to the apex of that political time and difficult investing time to the run in the bull market. Tell me about that transition and how you felt as a young investor.

STEPHEN AUTH: Yeah. It's funny, because I came in at a time. And Irwin said, well, don't go to Wall Street. The markets are terrible. And it was just the end of the bear market. But I probably have a somewhat optimistic personality, maybe.

But, yeah, I was very fortunate in my career. It began really at a bottom and enjoyed a long 20-year run with a few big accidents along the way, including '87, which I still recall, horrifying event, down 25% in a day, and that kind of stuff, which doesn't happen today.

But I learned from that that sooner or later, the thing bobs back up. And you stick with it, do your homework. But I came from a very conservative investment culture. I was working for Prudential-- very, very conservative company, investing for the long haul. And that sort of taught me the importance of looking at balance sheets and cash flows and being pretty-- we weren't really winging it too much over there,

ED HARRISON: Well, tell me about that being at Prudential, your first job out, that was your first job. And that culture versus the one that we were just talking about-- the wheeling, dealing, and sort of the Wild West that developed on the sell side in particular.

STEPHEN AUTH: Yeah, we were on the other side of that. And at that time back in the '80s, I was doing a lot of private investing for Prudential in the LBO business, which was growing rapidly. We were doing a lot of financing's. So it was an interesting juxtaposition.

But deals found their way to us. We were careful and cautious. We did very well with the investments we made in that hour. And then at some point, the CIO of Prudential, god bless him, asked me one Sunday afternoon if I would go to Tokyo. That was in 1990 just as that market was peaking at-- I don't think we've ever reachieved those levels-- 40,000-- 39,000.

And he asked me to go over there to set up a stock investment team for Prudential. And I said, Garnett-- I said, this is an interesting guy to ask. I don't speak Japanese. I've never bought a stock in my life. And I'm based here in the US. But he said, you'll be perfect for the job.

And that really was my entree into investing in stocks having come from the private side. So I just had, as a result, a kind of very conservative focus. I couldn't speak Japanese at the time. So I didn't understand any of the explanations of why the market was at ridiculous levels. It all seemed overpriced to me.

And I just started buying balance sheets, which I understood. And I quickly learned the Japanese terms for that. Well, that ended up working out pretty well for us. As it turned out if the market cracked, we ended up doing pretty well. So sometimes it's luck. In retrospect, some maybe say divine providence. But I was sort of seemed to be in the right place at the right time at key moments in my career.

ED HARRISON: I think it's pretty interesting, because we know you as more sort of a bull in the Barron's Roundtable. You called the market pretty well during this time. But that was your formative moment coming in almost at the top and being a conservative investor. How did you ride out, not necessarily the Japanese side, but the American side as we went through sort of a troughing and the jobless recovery and then into our own bubble?

STEPHEN AUTH: Yeah, and Ed, it's funny. I do have this reputation of being a market bull. And some people think I'm forever bullish, because I have been, to be fair, bullish from the '09 lows. In fact, we first got bullish at Federated. Go backwards, I switched over to Federated. I have only been two companies my whole life. So I've been at both about 20 years now at Federated.

But we went bullish on stocks back in late 2008, was a little bit premature. But it kind of worked out for us. So you'll think of me as always bullish. But I've been on other sides of this. In the Southeast Asian crisis, we traded that from a short position most of the time. And I can see bad things coming. It's just that this has been a very nice run.

And I looked at the opportunity in 2009. I mean, I have a very broad vision of the markets. So I kind of think we had this 20-year bull run in stocks that lasted to '99 that you mentioned, which was the first arc of my career, if you will. And then the first 12 or 13 years thereafter, we were in a multi-year bear market.

Really, I would count it from '99 to 2013 when we finally escaped the old '99 highs. My view has been that the market forces are now in place for a new secular bull that I think just started when we got out of the old highs of 2013. Some would say start in 2009 doesn't really matter.

But where you could have a couple of decades here a pretty good performance. And in secular bull markets, you can have 20% declines is in a corrective phase. In fact, you need them to fuel the bull. But importantly, you don't get 40% declines. You don't have a capital eviscerating of event.

And what makes the secular bull, I think, dangerous in a secular bull market is that we are willing to step up on 20% declines and buy in size because we see them as massive opportunity. So as you mentioned, in December of 2018, we were in such a decline.

Now, I know everyone believed that a big recession was coming, and the world was ending. And the Fed was going to hike until it caused the recession and everything else. And I was on national television, said, I'll tell you what. He's done hiking. We ain't done hiking. He's told us he's going to keep hiking.

I'm telling you whatever he's told you, I know that one of the effects of going through a secular bear is that everyone is cautious, including the regulators. And on the regulatory side, the one thing the Fed does not want to do is cause another recession. So I thought reason would prevail and even if Powell didn't.

And that was the case. I mean, very shortly after his hint that he was going to hike till he cause a recession, he came out and read it as kind of-- I call it the Iranian hostage speech where he pretty much-- someone in the staff members must have written it for him but pretty much retracted everything he said.

I promise I'm never going to hike again. I'll never do this. I'm sorry. And it's been all up from there. So, yeah, I think the psychology of this market is beautifully cautious. It's been the most unloved bull. I mean, I was getting a lot of criticism in December for our cool. Even for my own sales sourcing on Steve, I mean, do we have to be this far out there? I mean, we're 2,450 for goodness sakes.

STEPHEN AUTH: We're taught 3,100. And we're the high guys that year. And we've been the high guys on the Barron's Roundtable most years. But I'm just doing the math on this thing.

And I keep reminding everyone that the first thing to do is reverse this ridiculous correction, which doesn't make any sense. That gets us to 2,950. So it's not really that heroic to call 3,100 if you think the whole correction was nothing more than that.