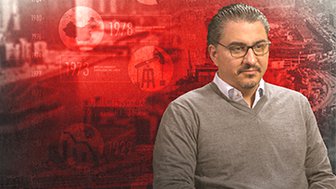 Jared Dillian, author of "The Daily Dirtnap," sits down with…

I've had a couple of flops out of 14 or 15 now. Not entirely flops, because they were all-- well, in fact, only one. And that one is still a work in progress.

GRANT WILLIAMS: Well, let's talk about the flop. Let's talk about that, because it's so easy to fail in mining. It's so easy. There are so many things, and most of them are outside your control. It's nature, for a start. But then you throw in permitting and changes of government.

There are so many things that can go wrong. It's such a tough landing the stick. So how was this one a flop?

ROSS BEATY: My very first company was Equinox Resources. I've talked about that a little bit. And this one gold deposit that we discovered in Nevada that we finally-- another company discovered-- it turned out not to be big enough for that company. So I was able to buy it 100%. I bought it back.

A year later, the gold price took off. I funded the purchase. Not by selling shares, but I sold a little royalty to Franco-Nevada, to Pierre Lassonde. And that funded me buying the other half for about $3 million. One year later, I sold the whole company for $110 million. Just because the gold price had taken off, this particular company needed a deposit like that, and it was a chance for me to finally make a buck.

GRANT WILLIAMS: But that's the reward. We talk about the risk/reward. That's the kind of...

ROSS BEATY: So I spent nine years building this company. Haven't taken a penny out. Everything I'd made, I'd reinvest it buying more and more shares. And finally, I got this happy ending. And it was pretty cool because I was able to say, OK, that company is so full of baggage and problems and hassle, I just want to say, over to you, you can have it, and start from ground zero.

But I had happy shareholders, because the last trading day with an all-time high. And so those shareholders, god bless them, a lot were Americans. A lot of them were Canadians. They were people who had followed me. Newsletter writers-- Bob Bishop. Rick Rule was a big part of that. All kinds of great, great friends, and people who really helped me build this company. They'd all been vindicated for supporting me.

Well, the company that bought Equinox was Hecla. Hecla at that time was known as a silver company. Even today, it still is, but it shouldn't be. It's mostly a gold company. And even then it wasn't. Only about 17% of its revenue came from silver.

So I looked at Hecla and Coeur d'Alene and Sunshine. None of them. They were all trading with the silver price, but none of them were real silver companies. They were other things. And so I thought, well, why don't I build a silver company?

ROSS BEATY: A real silver company. If I build a real silver company that has real leverage to silver prices, those investors are going to come to me instead of them. And then I looked at the silver fundamentals. And in 1994, when I started this, silver was trading for about $5 an ounce, give or take. Well, I was positive. The more I read, the more I was positive silver was going to go up to $10 by the end of the decade.

But I was able to use that high share price to backfill value and buy deposits that would ultimately create a company that really delivered on our mission, which was our day one mission of becoming the world's premier silver equity for silver investors who wanted equity, as opposed to buying silver bullion.

Fast forward to today, Pan American Silver is a big company now. It's definitely my largest company, the one I'm most proud of. It is the second largest primary silver mining company in the world. It's just in fantastic condition today. Seven operating silver mines. Or six now. We have six. We just closed one. Ran out of resource.

But we've expanded others where we have a trajectory of continuing growth, wonderful management team, incredible balance sheet-- pristine balance sheet. No debt. Great cash flow. So that company, even though I got it wrong on the silver price, we actually built a company with real value.

GRANT WILLIAMS: I want to stop you here because-- full disclosure, I am a shareholder of Pan American Silver, and have been for a long, long time. And so I've watched it--

ROSS BEATY: Not quite yet.

And so to flip that around, when you're sitting there, you must have shareholders calling you all the time, saying, the silver price has gone to $50, and the stock hasn't done what it's supposed to do. How do you manage that conversation?

ROSS BEATY: Right. A lot of people have short-term expectations. And I just ignore that. I just say, pretend you don't own the stock. You're going to be happy eventually, whenever you decide to sell it, if you hold it long enough. Because we're in a cyclical business. Metal appraisers drive an awful lot of these companies' value. Metal prices go up, and they go down, and then they go up again.

So where you buy the stock, a big chunk of it is where you are in the metals cycle. Precious metals or the copper cycle. But then behind that, you have what management does to build value in the company. And that's pretty important, too, in building fundamental value.

And what we try to do is look to the long term. Not a quarter. Not even a year. But we look to try to put an asset base together that's going to go for decades and decades. And that's the hard part.

They're pretty rare. They're pretty hard to come by. We want to try to manage risk, so we do want to try to spend all of our money on exploration, which is high risk, and actually has the potential to be worth 0, ultimately, if we don't have any success or any luck. On the other hand, you want to put some money to exploration because it has the huge payoff. It gives you the 10 or the 50 or 100 times what you invest in it, if you have that luck.

So what I tried to do in Pan American is a bit of both. Exploration, but also acquiring assets. Building mines, that creates value. But you have to pay a little more to acquire them because you've gone through the risk-- you've got to pay for someone else having done that high risk, high reward business.

And so buying well, discovering well, managing existing mines well, like you might buy a producing one. We bought one in Mexico. Well, it took a lot of capital, a lot of effort over about four years. And now the thing's just purring. It's generating massive cash flow. It produces silver for about minus $10 an ounce. It's just a massive contributor. And so you've got to look long term.

And really, I ignore people who just are fussing the value of a share. I say, look, if it's important to you, one day versus another, you shouldn't be in this business. Go and buy something really safe, like Apple or General Electric. Something really safe.