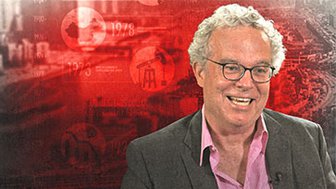 Kieran Goodwin, co-founder of Panning Capital Management, talks with Tony Greer of The Morning Navigator about his experience in 2008. Goodwin recalls navigating the minefield of a market meltdown successfully, but not without taking a few hits along the way. This clip is excerpted from a video published on Real Vision on March 27, 2019 entitled "The Rise and Fall of Credit Vol."

You were in a fraternity, I was in a fraternity and my fraternity was pretty chill about, hazing, we didn't really haze, but we had like a hell day. And I remember sitting blindfolded, and one of the things we're listening to this terrible music. And someone gave me an alarm clock sitting next to my ear for like an hour. So I always remember that experience, like how annoying that is. I mean, it was just more mental.

TONY GREER: Yeah. But what was it about the trading, about being in the trenches? Was it just all the pressure? Was it the frenetic pace of activity?

KIERAN GOODWIN: Well, I feel like we had a front row seat to it. And we made money in 2008. So we had like, I think coming into '07 and '08, we had A plus strategy. I think our execution was probably B minus. And probably because of the stress of it. But there was just, like we knew where all the mines were in the minefield.

KIERAN GOODWIN: There's a problem in a lot of the financials, whether they're broker dealers or the insurance companies.

TONY GREER: So you're able to stay away, out of the way of that risk essentially.

KIERAN GOODWIN: Yeah, but we're like, we were also like, you were like, all right, well this guy in that, if you're long, if you're short a company, let's say an insurance or financials, where we have all these shorts. Where you own CDS or short the bonds, what have you, buy puts on the stock. All right, let's be long on something, and then be like, oh my gosh, this is so bad. You can't be long on anything. It was like, it was like there was no longs. And so I mean, as much as I think we did well in the shorts, like every long hurts you like five times at 10 times more than you ever thought it could.

KIERAN GOODWIN: And quickly, right? So even though you were like had a front row seat and you thought you were navigating them, like it was so much worse.

KIERAN GOODWIN: Than we ever thought it could be.

KIERAN GOODWIN: So we had a short position on Bear Stearns via CDS.

KIERAN GOODWIN: And Bear, they had two big businesses. They had prime brokers for hedge funds. Hedge funds are fickle clients. That's a nice way to say it, right?

KIERAN GOODWIN: And they were massive in the mortgage, whether it's CMBS, RMBS, whatever. They had a great franchise.

TONY GREER: That was their book.

KIERAN GOODWIN: Those were really two hard businesses, right? So we had a short position. We covered, we'd made money on the short, we covered here are the inklings that are going to get bailed out. And then JP Morgan bails them out. And then the market rallied. This was '08. And even though that subprime had been blown out of water, CMBS, commercial real estate was getting blown out of the water, you had all these hung LBOs, but market rallied after that. The day Lehman Brothers was trading at 600 basis points in CDS on Friday.

KIERAN GOODWIN: So the bonds roughly you know we're trading in the low $80s. So that's like bad, but it's not like, everyone, everyone thought, I mean, we've seen the movie, read the book Too Big to Fail, whatever. Everyone thought Lehman was getting bailed out.

KIERAN GOODWIN: Right? So like we already saw the setup on Bear Stearns. Like Bear Stearns was worse than Lehman.

KIERAN GOODWIN: If you looked at the balance sheet.

TONY GREER: There was a head fake in there. The nasty one.

KIERAN GOODWIN: Right, the bonds go from 80 something to eight that next week.

TONY GREER: That's incomprehensible for most people. Most people will never see a move like that in their life, correct? I mean like--

KIERAN GOODWIN: Because I think the next one that's like that, who's going to bail them out?

TONY GREER: Yeah, yeah. Well, you know, put it this way, if your gift for banter about the markets, you left another quote in my head, because I was at Dahlman Rose at the time and the stock market was cratering towards, S&P cratering towards 700, 800. And I called you up and there were phones ringing all around you, and you were like, you took a second for me.

You were like, TG, it's going to be so that like admitting that you're long stock is going to be like admitting that you have syphilis at a cocktail party in New York City. I got to go. And I hung up the phone, and I was like, oh my god. I was like, I said to the guys around me, I said the smartest guy I know on the street just said the most profoundly bearish thing that I've ever heard in my mind. Maybe that's the bottom.

TONY GREER: Yeah, it was close. I mean, we weren't to, we hadn't reached the bottom yet, but we were getting to that point that I don't think anybody in the world, I mean unless you were there obviously, anybody in the world even understands the fact that for a while the thought of Lehman going bankrupt was the same as the thought of Apple going bankrupt tomorrow. It's the same exact thing essentially, where a behemoth in the industry--

KIERAN GOODWIN: I mean, Apple doesn't have, I mean the leverage.

TONY GREER: And so that was part of the feeling that everybody felt. Stock, the S&P was cratering 800, 700, and we probably hadn't gotten to the bottom yet. But at least you were the beacon of sentiment. You laid the sentiment out. You were like, stocks are like poison. Can have them right now.

KIERAN GOODWIN: We would talk about all the scenarios of what could happen, how bad it could get. And I mean Merrill Lynch, the Bank of America, they could bail them out. I feel like they kind of got picked off in a sense, so they're at the doorstep. Morgan Stanley bonds traded in the $40s. I mean, Goldman, Warren Buffett gave them the big preferred and the stock was at $109.40 and to $40 dollars like three weeks later.

KIERAN GOODWIN: So the AIG could could've went under. I mean, we were saying at the time, like if you went to like Broadway and got like 50 actors, like, hey, you guys are like day actors and went to some bank early in the morning, put them there and they started pretending like they couldn't get their money, like people would freak.

KIERAN GOODWIN: I mean, we didn't do that.

KIERAN GOODWIN: Yeah, but like that's how tenuous the situation was.

KIERAN GOODWIN: In the sense that, I mean, I get back to, I always think about credit. Like so I lend you $100 bucks. You're like, Kieran, I need, now no one has cash, put back in the day, like.

KIERAN GOODWIN: Yeah. I'd be like, I'll give Tony $100 because I believe he'll pay me back. And credit it comes from Latin credere, which means to believe.

KIERAN GOODWIN: Like nobody believed anything at that point.

KIERAN GOODWIN: Now people believe that Lyft, that lost, I don't know how much they lost, $2 billion last year?

KIERAN GOODWIN: You have no idea. Nobody knows, right?

KIERAN GOODWIN: But everyone believes it, because they're lining up like, you lost $2 billion? That's it?

KIERAN GOODWIN: Give me the stock.

TONY GREER: Yeah, opportunity to improve from there.

KIERAN GOODWIN: It's a low bar.

KIERAN GOODWIN: But I feel like, I mean, in a sense, that if you think about Amazon, they set that up. Because like forever, Amazon was making no money. And Jeff Bezos, like what he's done, it's phenomenal. Like amazing.

KIERAN GOODWIN: And even though, like I was talking to someone the other day, just the retail side he's following, obviously the cloud side, amazing. But like he might have got lucky on the cloud. Like--

KIERAN GOODWIN: Business. It took everybody by surprise.

KIERAN GOODWIN: But why I'm bringing, roundabout way of saying, he kind of set up, and he might be the one in a million, and probably is the one in a million business genius. But he set up this bar where you can lose money for a long time as long as you have this vision that it's going to be great. I mean, does the Lyft or Uber business model even work? I don't, I don't know. I don't know if it works.

KIERAN GOODWIN: I mean, so I just, I don't, did you listen or did read the book on Theranos at all?

TONY GREER: No, I just watched the special so far.

KIERAN GOODWIN: OK. So I did the podcast on it, which was an amazing podcast. I mean, it's totally insane. Like you go to all these people from Apple that like were Steve Jobs' right-hand man went to Theranos.

KIERAN GOODWIN: And left in 2012, because he was like, this woman is a complete hoax.

KIERAN GOODWIN: Right? And the hoax went on for another five or six years.

TONY GREER: Yeah, it was unbelievable.

KIERAN GOODWIN: So I don't know. You know, like who knows where we are.