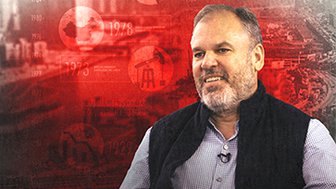 Jared Dillian, author of "The Daily Dirtnap," sits down with Tony Greer, editor of "Morning Navigator Newsletter," to explain how he navigated the most harrowing trading day of his career. This video is excerpted from a piece published on Real Vision on March 22, 2019 entitled "Failure as a Forerunner to Success."

JARED DILLIAN: Every day, it was like Grand Theft Auto. You're in this like multiplayer video game and you're just getting bombs dropped on your head every day. And that's what my life was like for like four years.

I can tell you about the worst day that I had.

JARED DILLIAN: And I even remember the date. It was February 27, 2007. And this was kind of going into the financial crisis. The financial crisis, I would say, started the summer of '07. And basically, we had had a period of time where the S&P was moving 20 basis points a day. Extremely low vol, VIX below 10. Nothing going on. Just creeping higher every single day. No volatility. And one day, we get to work and China had raised the reserve requirements. And if you remember the ABX, the subprime mortgage index, the ABX had cracked. It was down 10 handles.

So I get to work, and the SPOOs are down nine points, something like that. Not outrageous, but it was a pretty big move. And I barely sit down, and we get this call from an account in London that wants to sell 400,000 EEMs premarket. And this is before EEM split, so EEM was like $120. Big trade. And I had just seen this account like three weeks before. I was in London. This is their first trade, so I have to show them a good bid. And I even remember, I think it was EEMs were like 118 last. I bid them 116, down about 2%. They decorated my bid, and they opened 114 offered.

JARED DILLIAN: And keep in mind, this is really before a lot of high frequency trading and a lot of liquidity. It was very hard to get out of that trade. By the time I got out, they were trading like 111. So we lost a couple million bucks on that trade. The market was down 3% or 4%. We were getting pasted all day long. We had lost $2, $3 million.

Finally, the end of the day, I decide I'm going to be the hero and I'm going to try to pick a bottom. And I literally stand up on the floor, I'm like, offer side bid, two million spies, call your clients. And I'm making all this noise. Nobody hits me, so I sit down and I buy like 3,000 E-minis. And then the trap door opens up and the market drops like 20 handles and Globex breaks. Globex shuts down, and the only thing that's trading is the big contract. And the big contract is trading like 10 up, 10 handles wide. And I'm longing all these deltas and I can't get out. Mark to market I'm down like $5 or $6 million. And I literally sat there and I'm like, I'm going to get fired. This is the day that I get fired.

And just by a pure miracle, market rips back, ramps into the close. I get out for basically UNCH. I mean, it was a terrible day. I mean, even though that was the worst day, that was not atypical of some of the stuff that was going on in that period of time. Every day, it was like Grand Theft Auto. You're in this multiplayer video game and you're just getting bombs dropped on your head every day. And that's what my life was like for like four years.

TONY GREER: Yeah, it's very consuming when you're in that seat because in order to manage that book, you've got to be thinking about it 24/7 essentially. There's no out, right? There's no letdown until the weekend comes, and then you're probably still thinking about it because you're so deep in it, right? Those were, indeed, I think the golden age of desk trading. I think we got a couple of good experiences in there before that seems to be changing quite a bit.

So I got to meet you probably shortly after that, I think. Somebody forwarded me on Bloomberg an infamous Bloomberg that you wrote shortly, I guess, after Ben Bernanke's first rate cut, I believe. And I'm going to read a small passage from that. "Buy a ball-peen hammer. Buy an air compressor. Buy a cheese grater. Buy a German shepherd. Buy a racehorse named Currency Debasement. Buy one of those things you shake up and it snows inside. Buy one of those things you push and you make the lines on a baseball field." What was that all about? Can you set that up? Because when I got this email, I wrote back to you and I said, that was amazing, put me on your list. And off we went.

JARED DILLIAN: So it was right after the first rate cut. And so I had an email list at the time, a list of people I sent Bloombergs to. And it was pretty popular. I had a couple thousand people on my list. And it was mostly for entertainment purposes, although there were some content in there, too. If you recall what the political climate was like in 2007, we've swung very far left since then economically.

JARED DILLIAN: They took out these giant mortgages, and they couldn't-- Eventually, at the end of the crisis, we were blaming the lender. But in the beginning of the crisis, we were blaming the borrower, which I think was not misplaced. So that Bloomberg was a response to that, that we were bailing out people who had borrowed all this money and were not going to pay it back. And it's sort of tapped into a sense of outrage that people had as to what was going on. And so Fed Funds were at about 5.5%, and that was the first rate cut. And they were on their way to zero.

JARED DILLIAN: And really, it was almost like a foreshadowing of what monetary policy was going to be for many, many, many years to come.