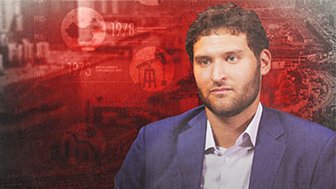 Michael Schwimer, CEO and founder of Big League Advance and…

Leo Hindery, chairman and CEO of Trine Acquisition Corp., sits down with Abbas F. "Eddy" Zuaiter, managing member of Zuaiter Capital Holdings, to explain how good leadership, at the right time, creates the optimal results for companies and their employees. This clip is excerpted from a video published on Real Vision on August 30, 2019 entitled "Capital Allocation and Wealth Inequality."

LEO HINDERY: I worked very hard to never lay off anybody, except for cause. I don't believe that the women and men who run these companies are the problem. If there is a problem, it's the managers problem.

My background is up in Washington state. I was raised in a very impoverished sort of family up in Washington state where I did my college at Seattle University. And after I got the army, I went to business school at Stanford, spent 10 magical years in the natural resource industry, merged that company into General Electric.

And that transition to me just happened stantially into the media industry where the balance of my career has been. And I think there's some interesting aspects of where your career lands you. Having landed in media, well, the 1 thing you know is media loves to cover media. So whatever visibility I have has been purely a function of the industry that I fell into.

And it's been just a wonderful run. I started my own company after a number of years as a salaried employee. And Media-- ran that for a decade, merged it into TCI, became the chief executive of TCI and Liberty Media. And we merged into AT&T. And I ran AT&T Broadband for a while and about a dozen years ago resurrected my investment company in Media of which you're a proud partner.

And it's an industry that has probably, Eddy, evolved more dramatically than any industry other than, perhaps, the finance industry, which are many of your own roots. And so you have sort of 2 concurrent obligations-- 1 is to run your assets well but also to look ahead in a insightful sort of sensitive fashion to an industry that just is changing under your feet every day.

ABBAS F. ZUAITER: So I want to go back and just add a couple of questions, because I think leadership qualities are probably the most understated of a CEO of someone who runs a business, because you really are, not only an allocator of assets, you're really someone who sets a vision and an allocator of people. Explain to me, why did you go to the military? Tell us a little bit about that.

LEO HINDERY: Well, the draft-- I was going to be drafted, and I enlisted in the Army. I didn't want to just be drafted. The war was on in Vietnam.

ABBAS F. ZUAITER: So you volunteered.

LEO HINDERY: I didn't go to Asia. I was given an intelligence bill, an intelligence position and did my 2 years and then after that went to Stanford Business School. And to the heart of your question, I wrote a book about this. I entitled it, It Takes a CEO. I think you're born to be a CEO.

You can aspire and successfully attain other roles in industry. You can always work for somebody else. But if you're going to be the CEO, it takes this particular skill set. And often, it's not a pervasive skill set. It doesn't always survive over extended periods of time. You sort of overstay your welcome at some points.

But you take a Winston Churchill checkered history prior to the Second World War and clearly born for a moment in time to save us from fascism. And I feel that sometimes, industry is the same way that the real fun for me has always been in the tricky situations-- the ones that are profoundly challenging.

I assume I'm supposed to run things well. That's a presumption that you have to make about yourself that why in the world would you have these titles if you weren't by nature a good operator? But I think the point of your question is the one that intrigues me, which is, it's not just being an operator-- you have to have a vision.

You have to advance thousands, in some cases, tens of thousands of women and men to a common objective gladly. They want to be there of their own volition. You don't drag people into positions. You encourage them to aspire to greatness. And then you lead them there. And in your role is to help them lead-- help them lead, not just your own leadership, but then also to see ahead.

ABBAS F. ZUAITER: Tell us a little bit about that vision, that leadership. So there was a great confluence of events where John Malone, the cable industry, and you. And I remember you telling me that one of the things that you're most proud of is that you were able to really take a business that really wasn't functioning well, turn it into a great operating business without having to do significant layoffs.

LEO HINDERY: I've worked very hard to never lay off anybody, except for cause. I don't believe that the women and men who run these companies are the problem. If there is a problem, it's the manager's problem. And TCI was in quite distress. This was February of 1997 and was the largest cable company in the world with operating margins that were embarrassingly low, lots of contra attempt with attorneys general about some of our behaviors.

We weren't doing very well. We were big, but we were doing very poorly. And we initiated sort of 2 initiatives at once. One was called the Summer of Love, which was a complete reordering of the entire US cable industry. About 2/3 to 70% of the cable systems, cable operators, cable subscribers in the United States, Eddy, changed hands in 2 years time--

LEO HINDERY: --so that at the end of it, we owned whole markets so that we could compete with the satellite, compete with the phone company, compete with the public utility. While that was going on, I had a fiduciary responsibility to fix TCI. And that was hard. We did it from the bottom up. We gave securities in the company to every employee, unionized or unorganized.

And we just went to a common objective. And I was convinced that we could fix it. But if we had fixed it, if it turned out like I hoped it would, the beneficiaries of the fix would be the women and men who work there. We had 67,000 employees. And every one of them was a shareholder when I left. And they were the beneficiaries of these increases.

We had a 16% operating margin. When I walked in the door, we had a 43% operating margin 2 years later and never raised our rates in excess of inflation. Just before I'd arrived, there had been a reduction in force. 10% of the workforce had been let go. I hired every one of those women and men back into the company, because it wasn't their fault.

They were the sort of the hole in the dike. But the dike was poorly assembled-- poorly constructed. And so I think leadership-- it's a strange very personal phenomenon. And I teach at some of the business schools still, of course, or so a year at bigger business schools. And some of these women and men are not born to be the CEO.