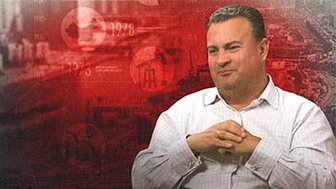 Peter Kraus, chairman and CEO of Aperture Investors, joins Grant Williams to discuss his luck in having his start in the industry coincide with a major boom. Kraus talks about the risk of leaving a good job, gauging new opportunities, and the challenges of building a new business. This video is excerpted from a piece published on Real Vision on June 12, 2019 entitled, "Investment Titan Rethinks the Active Management Model."

PETER KRAUS: My mother said to me something that stuck with me my entire career. She said, don't do something you would regret. And I would regret not taking up a job. So, I took the job.

In 1974, Wall Street was not what it was today, it was a very different place. If you were talking about the bond trading business, that meant actually cutting out the coupons on the bond and taking it down to the trust department to get your cash payment. It wasn't exactly the same bond world that you have today. And equities were certainly traded, but at five cents and commissions and commissions I think would be regulated in 1973. It was a very different world. Banks were interesting, but not very exciting.

So, the investment banking world existed, I didn't really know it that much. And accounting was an interesting profession. People don't necessarily think about accounting like today. But in the '60s, accounting grew dramatically, because the SEC actually required all public firms to actually have audits. And that meant that the business grew dramatically in that time period. So, you were at the tail end of a big growth spurt in accounting. And that's why it looked like an interesting profession.

GRANT WILLIAMS: Yeah. So, from the accounting world, there must have come a point where you figured there was something bigger and broader.

PETER KRAUS: Well, I know I love Peat Marwick. I thought accounting was great. I was interested in tax, I was interested in auditing, I was interested in consulting, and they had all those different capabilities. I like numbers. I like clients, I like people, a lot of good things. But the business began to slow down and inflation actually began to eat away at the cost structure. And I came up with a new idea at Peat Marwick, a new business to build and I went to my boss and I said, either I'm going to build this new business, or I'm going to leave because I don't really want to keep doing what I'm doing. He said, well, okay, we'll go build a new business. And we tried to do that. And my first client was Goldman Sachs. And little did I know, Goldman Sachs decided to offer me a job.

GRANT WILLIAMS: Doing that, do they see the business like it, or it was just-

PETER KRAUS: No, no. So, Goldman had announced to the world that it was going to build a mortgage business. Oh, yeah. This is 1985. And they were behind Credit Suisse and Salomon Brothers. And they wanted to catch up. And so their idea was they were going to start this mortgage business and they took two partners, Joel Kirschbaum was one and Gene Mercy was the other. And they co-headed this mortgage securities business, and they went and hire 100 people.

And I think I was employee number two or three. But I was a partner at Peat Marwick, and they were going to hire me as a vice president and that was a little challenging. Not so much for me, but my wife was not particularly happy about that. And I remember my father said to me, he said, wow, you're going to go down to Goldman Sachs? You're a big fish in a small pond. There you'll be a small fish in a big pond, which I didn't think was very motivational.

And my mother said to me something that stuck with me my entire career. She said, don't do something you would regret. And I would regret not taking up the job. So I took the job.

GRANT WILLIAMS: It's funny, the first big career move I made when I went from Robert Fleming, which is a small independent investment merchant bank in the UK to UBS, and my first six to eight months there, I felt like that. I was out of my depth completely and thinking, what the hell did I do here? You just feel so small, and it ended up being probably the best decision I ever made, because it was a new business, you didn't have that-

PETER KRAUS: It was a new business, I had that opportunity. But the one thing about Goldman that I thought was really unique- Peat Marwick was a governance structure where you sort of had to be a jack of all trades. You had to be a technician, you had to be a client person, you had to be a manager, you had to operate your business, you had to go get new clients. Nobody is good at all those things. And what was really interesting about Goldman Sachs they had sort of an ability where if you were a technically strong person or you were a very good client person or you were a good trader, everybody could actually execute on their skill set and just on their skill set. And yet the compensation levels were consistent.

So you didn't have people trying to be managers because you got paid more. You could be a really good merger guy and get paid as well as the really good investment banking guy as well as the really good trader. That created a really interesting dynamic, I thought, to attract talent and to allow people to specialize and be much more effective in their roles. So that was the thing that actually I thought was special about the firm, and made me feel like, okay, it's worth the risk.

GRANT WILLIAMS: So where did you go- what was your chosen skill that you decide to focus on at Goldman?

PETER KRAUS: Basically, I'm a salesman at the end of the day. I'm really good with people, and I'm willing to ask for the business, and I'm willing to put myself out there. I'd say that over my time there, I was able to build both technical skills, and trading skills, and investing skills. And today, I'm probably more multi-dimensional than I was when I first started. But that was the core skill at the time.

GRANT WILLIAMS: So walk us through building that business, because Salomon was a behemoth back then. Anyone that wanted to challenge Goldman, probably the only people that could have done it with any reasonable expectation of success. What was it like to see Goliath there and coming into day, how do we knock this guy down?

PETER KRAUS: Well, I think ignorance is bliss a little bit. So I'm not sure we necessarily appreciated the size, and skill, and sophistication. But it was also a great time of innovation. I think of money like water. It finds the lowest level. It always moves to that level. Cash flows are similar. And so if you think of finance as just a series of cash flows, well, how do you structure the cash flows, and how do you think about the cash flows? How do you optimize the cash flows?

Well, that really hadn't been done very much until the mid-'80s. And collateralized mortgage obligations and interest rate swaps and things like that- they were all new. And one of the reasons why I ended up at Goldman Sachs was the accounting profession was reacting readily or actually quite frequently to changes in finance. So for example, in the early '80s, there were no interest rate swaps. In the early '80s, you started to actually create these collateralized mortgage obligations. How did you account for these things? What were the accounting methodologies that you used?

And so actually, it was quite innovative. And so even though we were starting something new, we were in a space where we thought innovation would actually work. And in fact, we did. We innovated a lot of things. And so did the whole Street, but Goldman was part of that. And that's really how we competed.

So I was very, very fortunate to have been at Goldman Sachs at a time of meteoric growth in a period, or at a place within the firm where the financial markets were growing rapidly, and focused on a segment of the economic world within financial institutions, that were also changing dramatically. If you go back in 1983 in this country, or in 1985 in this country, you had state and federal regulations that prohibited bank mergers between states. So we had 3,000, 4,000 banks and there were really no mergers of any significance unless it was within a state.

And as those state laws broke down, and the compacts, the regional compacts broke down, you had this significant explosion of bank merger activity. And with that bank merger activity, you had financial innovation, and you had expense reduction, and you had a significant growth in capital markets all happening at the same time, all focused on the financial markets. And so I was lucky. I was in the middle of that and benefiting like other people who were in the middle of that.

And said, well, you know, the regulations are unique. The nomenclature is unique. These organizations aren't like Procter and Gamble. You really have to understand something about them that's special. And if you did, you could provide more value to your client. And so today, it's obvious all the firms have financial institutions practices. But that wasn't obvious in 1985. And so again, we were lucky enough to sort of see that and capitalize on it. And that actually was the opportunity for my career.