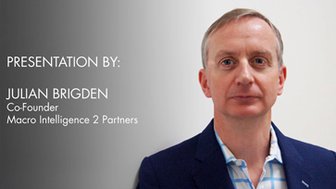 A Real Vision favorite, Julian Brigden returns with an analysis…

The dollar and gold. Two little words which could be highly profitable for investors over the next twelve months, as Real Visions’ own Raoul Pal brings his global macro context to this edition of Espresso. Raoul thinks both assets are a definite buy right now and as always with his trade ideas, they are steeped in technicals and reinforced by some heavy duty fundamentals. He maintains that the third dollar bull market in history still has a long way to run, but it’s the explosion of the carry trade in recent years that really provides potential for more gains. Borrowing dollars cheaply abroad to invest locally in a globalised banking system has created a $10 trillion short position – the largest trade the world has ever seen! As the carry trade unwinds and regulatory changes like Basel 3, exacerbate the shortage, the dollar looks set to stay strong. Gold, meanwhile, could just about be the smartest way yet to play the negative interest rate environment and as the video explains, the traditional inverse relationship with the dollar looks to be a thing of the past, resulting in a very tasty risk reward ratio. Click on the clip to get the full picture and a range of trading possibilities, only on Real Vision.