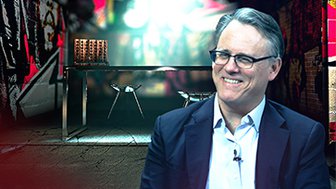 Skin In The Game

The Fat Pitch: Inefficient Markets and the Future of Sports Gambling

The Fat Pitch: Inefficient Markets and the Future of Sports Gambling

The Critical Tell for Stocks

The Critical Tell for Stocks

The Cycles of Success

The Cycles of Success

The New Drivers of Gold Prices

The New Drivers of Gold Prices

Taking Advantage of the Algos

Taking Advantage of the Algos

The Hidden Value in Crypto

The Hidden Value in Crypto

The Pain and Pleasure of Inflection Points

The Pain and Pleasure of Inflection Points

Playing the Next Financial Revolution

Playing the Next Financial Revolution

Brian Reynolds, former chief market strategist at Rosenblatt Securities, sits down with Real Vision's Tyler Neville to discuss how unfunded pension liabilities are the real engine for the US credit boom and how this financial engineering has produced one of the greatest bull markets in history. A legal mandate requires these funds to generate 7.5% returns, and when they fail to do so, taxpayers foot the bill. As a larger percentage of these pensions are moved onto corporate balance sheets in the form of debt, the tightrope these pension funds walk gets more and more precarious. Filmed on March 25, 2019 in Goffstown, New Hampshire.

BRIAN REYNOLDS: Before we invented the margin credit market, the stock market ran on fundamentals, things like earnings, things like valuations. And then the credit market came along, and starting in the 1990s, disrupted that whole process. 40 years ago in the '70s, the average company was highly rated, AA or AAA rated from a credit standpoint.

Now we've added so much leverage in the last 40 years that the average credit quality has gone down to just above junk.

TYLER NEVILLE: Brian Reynolds, here to talk about unfunded pension liabilities, the credit boom and corporate buybacks. And we're here at this lovely New Hampshire Institute of Politics, which is the perfect setting for our conversation. First, why don't you just get everyone familiar with your background and maybe go through that a little bit.

The first 16 years I spent on the buy side of David L. Babson and Company. It was a great place to work because it started in 1940. I have mentors that go back to the 1920s, '30s, and '40s, they taught me to follow the money. They taught me this business the old fashioned way.

And I've brought that through every job I've ever had since. And it was a great place to be because that was the emergence of credit as an asset class. Not only was the junk market not invented yet but the actual investment grade credit market was still in its infancy. So it's a very different world now than it was then, because credit is now so big it dominates financial markets, but back then it was a backwater.

So I kind of grew up with the Martin credit market. I saw it develop from almost nothing into this large asset class, which is now the tail that wags the dog.

TYLER NEVILLE: Some of the things you talk about, the Daisy chain of capital, now that's like a primary theme throughout your work, can you explain that for the viewers?

BRIAN REYNOLDS: Before we invented the Martin credit market, the stock market ran on fundamentals, things like earnings, things like valuations. And then the credit market came along, and starting in the 1990s, disrupted that whole process. So now we're in the third modern credit boom. The first one lasted from 1991 through 2000, then we had a financial disaster.

The second one went from 2004 to 2007, then we had another financial disaster. And then we launched another one in 2009. And all this Daisy chain is, is our public pensions needing to make outsized returns. They have become the dominant global investor.

Our pensions were only about 60% of GDP in '84. Now they are 120% of GDP. That's massive spectacular growth. There's nothing on earth that's grown that fast from such a high base. So they're the dominant global investor, but they're so underfunded they need to make 7.5%.

TYLER NEVILLE: So talk about how the big, big pension funds work. Why 7.5%? And where's that money going?

BRIAN REYNOLDS: The 7.5% they need to make, that's the difference between what their governors and their legislatures have under the mat versus the promises they've made to our public sector workers, police officers, firefighters, teachers. Most state governments tend to work the same, so they all tend to have that same gap. And that gap works out to be 7.5%, which is crazy because most interest rates are much, much lower than that.

So they really have to push the envelope in terms of what they invest in to try and get that. And you would think they would be in stocks because pensions should be long term oriented, but most pension boards are police officers, teachers, firefighters, and politicians. They have a short term focus, and so they invest in the credit market.

They started doing it in the 1990s. The most famous credit fund they hired was John Meriwether's long-term capital management. But it wasn't just him, it was thousands and thousands of other credit funds that mimicked him. These pensions will hire these credit funds, they'll put money to work on an aggressive leveraged basis to try and get that 7.5% yield they need.

And when they buy these record amounts of corporate bonds from companies, that puts cash into corporate balance sheets. Modern CEOs are incented to get their stock price up, so they take this unlimited money that comes from our pensions via these credit funds and use it to buy back their stock. That's a Daisy chain of financial engineering.

TYLER NEVILLE: Now, can you put that in a relative context? How much of the buybacks have pushed the market up? First, like say, ETF or mutual funds. How come people don't quantify the buybacks in relative terms to that? They concentrate so much energy on Wall Street talking about ETF flows and mutual fund flows.

And how does it get overlooked? What's the number?

BRIAN REYNOLDS: Because the world has changed in the last 3 and 1/2 decades. As I said, the junk market didn't exist when I started in the business, but from the late 1980s on, the junk market began to become a bigger force for this, and that's when we started putting on leverage. So 40 years ago, in the '70s, the average company was highly rated, AA or AAA rated from a credit standpoint.

Now we've added so much leverage in the last 40 years that the average credit quality has gone down to just above junk. That's how much we've levered up corporate America. And if you look at a chart of who's been buying stocks over the last few decades, there's been money going to ETFs, but that's come at the expense of mutual funds, pensions, both state and private pensions have been large sellers.

So investors as a whole have really done nothing these last three decades. The buybacks have taken an increasing share to the point where they're almost 100% of the buyers of the last decade. In other words, investors have done nothing on a net basis for 10 years. Yeah, they put money into ETFs at the expense of active product.

And the result is this Daisy chain of money coming in from taxes to pensions, going into credit, which is then used to artificially push up stock prices.

TYLER NEVILLE: And a lot of times that money ends up in not profitable zombie companies. And you talked about in 2015, 2016, I believe, that money flowing into energy companies that oversupplied the market. Can you talk about how that kind of related to back in the WorldCom days?

BRIAN REYNOLDS: This credit money typically zeros in on a particular industry. In addition to boosting the overall level of credit, we overdo it in an industry. So in the 1990s, we focused on companies like WorldCom and Enron. We inflated their balance sheets to the point where their valuations didn't jibe with reality.

And then it came down like a souffle. Then we did the same thing with subprime housing in the next cycle, and that collapsed. And then we did it with energy companies from, say, energy and commodity companies from say 2009 to 2013, then those companies collapsed. And now we're starting to do it with commercial real estate, so it's just like we go from one asset class to another within the context of boosting overall leverage.

BRIAN REYNOLDS: I have three themes. My first theme is that we're in this credit boom, this Daisy chain of financial engineering. But my second theme was that it gets periodically interrupted by these panics, because equity investors just don't believe in this. The stock markets outpace the economic fundamentals over the last decade.

So if you are a fundamentally oriented equity investor, you don't want to buy stocks, you don't want to own them, you want to sell them in a drop of a hat every time there's a worry. We've had 35 pullbacks in the stock market that have been marked by irrational inversions of the VIX curve, where people get so panicked about the downside that they pay up for short term protection when longer term protection is cheaper. The most recent of those was in the fourth quarter of 2018.

And when these stock market panics happen and the VIX gets inverted, the credit market shuts down. Because these credit funds that are hired by our pensions to put money to work, they're allowed to take a break during a panic to see if the turbulence creates a better buying opportunity. So yields and spreads typically go up during these panics. That happened again in the fourth quarter of last year, as demand for credit temporarily stopped.

But once the equity panic runs its course, as it did at the start of January, then the credit market opens right back up. People make up for lost