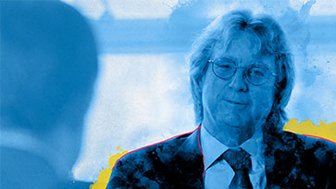 Roger McNamee, author of "Zucked: Waking Up to the Facebook…

David Blumberg, founder and managing partner of Blumberg Capital, joins Tyler Neville to compare investing in venture capital and public markets. Blumberg notes the degrees of control, levels of risk tolerance, and incentives that differentiate the two types of investments. This video is excerpted from a piece published on Real Vision on May 17, 2019 entitled "Public vs. Private Capital: Taking Advantage of Misaligned Incentives."

DAVID BLUMBERG: Entrepreneurs thrive. So I'll just say one of our guiding principles is that the entrepreneur comes first. And basically the idea is that some venture capitalists, I think, get the mistaken impression that they're in charge. They're the puppet master, and the entrepreneurs are little marionettes that dance on strings.

We see it as the NASCAR model. And the NASCAR model, the founder is really able to call on us for resources. So we're there to change the oil and fill the gas and bring fans into the stands. And, well, we've been around this track 1,000 times, so we have some experience that can sometimes be helpful to say, hey, maybe slow down around that curve. You might crash. And we would take it at 100 miles an hour instead of 150. So some of that advice comes in handy.

And then this network, over the years, builds up and builds up. We specifically have something that's a nice value add called our CIO Council. And that CIO Council meets with our teams about four times a year in New York and in San Francisco. We bring in our portfolio companies. They can get feedback from the market, from real practitioners. And we'll see CIOs, chief information officers, some CSOs, some chief marketing officers, because they today are spending a lot on IT and services.

So again, it takes a village. You could say it that way. There's a whole ecosystem of people that need to support entrepreneurs. And we try and find the most innovative ones building the greatest companies and help them scale. So from seed to A is where we like to start. And then we follow on.

TYLER NEVILLE: Could you give us a little background of how it-- so generally our viewers are stuck in public markets a lot. Could you tell us--

TYLER NEVILLE: Yeah. Could you tell us how the seed round and the Series A round, and where are you guys primarily like to play in, and how your process works.

DAVID BLUMBERG: Well, it's so funny because that brings me back to my days at T. Rowe Price because even when I was there, right out of college, I knew that I caught a salmon. I knew that the big salmon were caught in the bay. But I wanted to go upstream and find the minnows that were going to become the big salmon, and understand what are the right requirements to grow them fast, healthy, and strong, because I thought that at early stage, we in the venture fund could have the most impact.

And in terms of running a venture fund in that market, Blumberg Capital is relatively large. We're running about $550 million. The last venture fund was over $200 million. So for that seed and A rounds, as a specialist in that category, that's large. And we can have large ownership, we can lead rounds, we can follow on. And that's not true of most early stage funds. They're generally more limited in scope and tenacity. So we have that advantage.

We don't know all what's going to happen in their competitors. But we have a good knowledge of the insides of the company, and we see the management up close on a regular basis because we take board seats. Most public managers are at least one or two or three leagues removed from those decisions. So we're seeing up close, in real time, with access to private information. That's why I love this business.

TYLER NEVILLE: So another interesting thing is the incentives. So you're a longer term incentive.

DAVID BLUMBERG: There are so many interesting topics there. I'll pick a few. One, you're right. The public market board of directors and CEOs are really short-term-oriented for these quarterly consistency numbers. And so you see the market reward that because the market doesn't like uncertainty. And it tends to make people a little bit more short-term-focused and do things that are safe bets.

We're more interested in things that are longer term and little bit riskier bets. And we're able to let people try things out for a year or two to grow into the right approach and right success factor. So sometimes it may take two or three pivots for them to reach the right escape velocity.

I'd say that the benefit-- this allows us to do more in R&D. And you'll find that the trend has been-- there used to be great places like Bell Labs and Xerox PARC that were enormously innovative. Not everything came into production for those companies. A lot of the results of those got commercialized by others. But innovation tends, today, to become much more efficient in small groups. And that's who we finance.

So they might have been trained at other places or at universities. But then they come out in a small group of three, four, five, six guys and gals, and we back those kind of startups. So they can have several years before they're actually expected to show something major to the markets. So they have a lot more flexibility. They can pivot a few times. That's a lot harder for the big companies.

One of the rescue agents that helped venture capital really thrive from transition back in the '70s and prior, most of it was hardware and semiconductor-related. Now it's much more software.