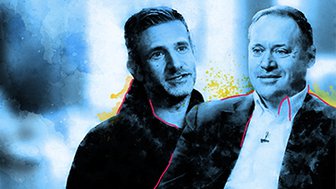 Will Star Trek-style "replicators" soon become a part of ordinary…

Richard Excell, senior portfolio manager of Wolverine Asset Management, joins Michael Green of Thiel Macro to discuss how algorithms and AI can improve portfolio construction through technological adaptability. Excell discusses how "bots" can not only help investors adapt to the market, but also help mitigate bias, measure value and diagnose risk. This video is excerpted from a piece published on Real Vision on April 6, 2018.

MICHAEL GREEN: So I move out to Silicon Valley or San Francisco when finally it's starting to see negative population pressures and everybody smart is moving in the opposite direction. What role does artificial intelligence play in how you think about your investment process and how you think about these bots?

RICHARD EXCELL: Well, I do kind of want to stress that we are a discretionary strategy. So our decisions are always made at a discretionary level. But our process has remained remarkably similar through the last 20 plus years. However, the key to a successful investment process in my mind is to be disciplined but adaptable. And I think what we're talking about with when we're looking at the bots is just a way to try to be a little bit more adaptable to the marketplace. It's to be adaptable to the standpoint of if you go back in the previous career we had, maybe call five or 10 years ago, we would have had people in teams and all those different seats telling us what was going on in the market and what they see in the market without being afforded that luxury because you have to do more with technology because you don't have as many people to do that with.

And so, we've built the bots to, initially at the first step, replicate what people were doing before. Not from an investment standpoint, but from an information standpoint. When you talk about AI, and again, I wouldn't think we're going to be at the forefront of that per say in our mind, but artificial intelligence, machine learning, et cetera clearly is where the market is moving towards. I don't think it'll be there next year. I think it will be there in the next 10 years. But it's just another tool in the toolkit that help you make your process more adaptable to what it's seeing in the marketplace, all within the framework of the same sort of discipline framework of how you want to parse the data. To me, it's more about how you access the data than it is how you interpret the data once you have it.

MICHAEL GREEN: So your clarification on that as a discretionary strategy is important to me because you and I have talked about this repeatedly, but the way I think about quantitative strategies is that they're inherently short volatility. No matter how you structure it, in one form or another you are saying the world in the future is going to look very closely like it did in the past. And therefore, these price patterns repeat or these signals that we're receiving are somewhat immutable. But you're using it very differently. You're actually saying this is an information set and that I need to be able to construct a thesis and a theoretical underpinning behind what I'm looking at. Do you ever find that bots totally flip your perspective?

RICHARD EXCELL: I don't find that they flipped a perspective, but I find that it's really not that different than when you have a conversation with smart people around the room and you're challenged. Your perspective might be challenged. And then to me, the onus is on you to debate your viewpoint. And if you find that you're lacking in that course of that debate, you might want to go back and rethink it. If you feel like you're kind of winning that debate, if you will, you maybe feel a little bit more confidence that, hey, you know what? I was tested in my thesis and I came out positively on the other end.

So I absolutely find that we'll test how we think about the world or how we're starting to think about the world. I mean, the perfect example right now, we're a little bit more positively predisposed towards growth, towards inflation, towards nominal growth and what that means for securities prices. But the flows right now or the data right now is telling us that the market is seeing things very differently than us. So that could be a potential opportunity or we could be completely wrong. I think we will have road marks that we want to look for to know when we want to maybe change our strategy. But for now, you have to respect the information you're getting, and that that's where risk management or asset management is a combination of dogmatism and pragmatism.

And you have the best the best of asset managers are those that know when it's time to be one or the other. And for us right now, we think it's time to be pragmatic and not dogmatic. There might be a time when the other data we look at is overwhelmingly positive, or that you get to a level in terms of valuation price, et cetera, where the risk reward suggests you're being paid to take the bet. That it will be a little bit more dogmatic. That doesn't feel like that's the time right now.

MICHAEL GREEN: You mentioned your bots, one of the things that you highlighted is that you have value bots effectively. There's a value factor, right?

MICHAEL GREEN: And it's just not working.

RICHARD EXCELL: Well, it's not working for us. But it's particularly not working. I think one of the problems with-- and I would love to know what you look at, you have a more robust value background than I do. But one of the things I see in the market levels of value or market levels of growth with the problems is there's an inherent capitalization or sector bias in a lot of those indices. And so value now working in the Dow Jones measure might just mean that energy or financials weren't working.

So what we do is we factor, we take out the capitalization buys. We take out the sector buys. And it's always a sector neutral market, neutral size, neutral. Look at L1, the S&P kicks all the way down to L4. And say, OK, within each one of those industries isn't working. And so we can get add it up, aggregate it to the top level but then say, OK, if it is working or isn't working where is it or is it now working. And what's the hit rate across the different industries.

And so, it's a little bit more, I think for us, robust factor. In the sense, it is telling you truly what you're looking for.

MICHAEL GREEN: So when you make that modification. And again, the SPX L1 through L4, just different levels of specificity in terms of the sectors. So L1 would be information technology, for example. And L4 would be internet software.

MICHAEL GREEN: Do you see the factors working better within those subsets? Is this a sector or industry driven phenomenon as you think it is possible?

RICHARD EXCELL: They're working slightly better. But it's not in aggregate. It's still not working. It's working in some places. But the reason I bring up is we all get the information and email from the street, et cetera. And not to pick on them, but a lot of times you'll get the, well, growth is crushing value, et cetera, et cetera. But when you kind of look down to how those measures tend to be constructed, it tends to be that just is another way of saying tech is working and energy is not working.

But there are one or two places where it is working. Is that early signs that it might creep in? It's not a strong enough factor for us to want to be interested in it. But it is probably a little bit more informative that if you were concerned with-- if you were to go in the health sector right now, you might not want to ignore that factor, at least.