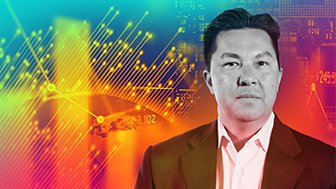 DAVID FLOYD: Hey there, traders. David Floyd here with Aspen Trading Group on behalf of Real Vision Television. And my next installment of the technical trade series, I want to actually review three trades here today, but with 1 overriding backdrop. And that's the improving technical condition of the market as well as some pretty robust quantitative data that I'm using to kind of support the technical argument.

And what's happening currently is we are on the verge, and we've basically done it. We just haven't closed quite above it. We're making a 6-month high in the technology sector. And of course, that's going to take us kind of into uncharted waters, so doing some of the price projections with Elliott Wave and Fibonacci largely kind of cast aside, because we're heading to new highs.

But from a quantitative standpoint, we have some data points that we can use to kind of project where prices are likely to go, historically speaking. And there's been about 16 instances over the last 15 to 20 years where when the technology sector makes a new 6-month high, we can look ahead 3 months, and also about 9 and 12 months, and get an overall rate of return looking forward.

And I would say looking ahead 3 months, maybe even sooner-- it could even take a little bit longer-- but I would say minimum, we're heading towards $80-plus. Now, using that same quantitative data, again, a new 6-month high in the technology sector, we're looking ahead 12 months, we're looking at about 20% returns. So on average-- again, there's going to be variations of that, lower total returns and even higher total returns. But about 21% actually is what the number comes out to be, so that's going to take us around $92.

Now, there's one other measure. So again, we're at 76 now. We could go up towards 92. Now, the one other measure you could use-- and again, using something very basic from a technical analysis standpoint-- is just simply measure. You might want to look at this as a very, very primitive inverse head and shoulders. I'm not quite seeing it that way.

So depending on the time frame you're looking at, you could look at trading this out on a 3-month basis or looking ahead further. But if you're long the underlying stock, you can just simply gauge that as you go along. But I'm looking for at minimum $80 in the near term, possibly $90-plus looking out 9 to 12 months.

The other market I'm looking at-- and again, this is going to be kind of-- having the technology sector, and going to be talking about the financial sector using XLF, which is the ETF that represents the financial sector. Having both of these sectors kind of take on a bullish context is going to put an overall bid in the market. S&Ps are, of course, flirting with moving to new highs. We're trying to get above the 2,900 point level. At this point, we're at 2,884. It looks as though it's probably only a matter of time before 2,900 gives way.

But let's look at XLF, because the financial sector has been lagging. But the way I'm looking at the XLF right now is that I believe back in that December 24 low when we had the big sell-off, just like in the S&Ps, that to me looks like a wave 4 low, and then we've been since moving higher. Now here, however, I do see an inverse head and shoulders. And, again, using some simple measurements, which I'll go over in just a moment, that gets me to where I think prices are likely to go.

So using quantitative measurements for XLF after a 3-month high, that historically has seen prices about 13% higher over the next 9 to 12 months. Now, granted, we're trading at $26.42 right now, so that only brings us maybe to the high 20s, maybe low 30s if we get a variation a little bit higher or a little bit lower of that average return of about 13%. So I would keep that in mind as an overall base case scenario, so to speak.

But if, in fact, this inverse head and shoulders pattern plays out, again, using the same technique I used when looking at XLK, if we measure from the head, which is at about $22 all the way to the neckline at about 27, that gives us about $5 of upside. We're currently at 26, so that's going to take us to about $31, $32, give or take.

So I think at minimum, we've got that upside. And with the overall technical backdrop improving, I think that longs in XLF make a lot of sense as well. Now, granted, you could play a lot of these with options markets, perhaps outright calls or perhaps call spreads. But for today's video, just simply keeping it simple with using XLK and/or XLF.

Now, again, with an overall underlying bullish tone, there is a way to play this in the currency market as well. And the currency that I'm focused on most right now is Canada versus dollar yen. So I'm going to bring that chart up. And this, to me, is a fantastic set-up. And I'm going to drop this back to, oh, let's use a 2-hour chart here. And I'm going back to the March 24 low. I'm using it as my reference.

So right now, I'm looking at this price action since April 3 until we are today, which is April 9. There's just some sideways consolidation. We might dip a little bit lower. But I think ultimately, Canada-yen will be moving higher. We've been nibbling at it here at Aspen Trading. Our average entry right now is at 83.60. We're currently trading at 83.39, so we're obviously a little bit under water.

It's entirely possible we could see prices move down to around 83.20, especially if the S&Ps are continuing to correct a little bit lower, which they are right now, although I do fully expect the S&Ps to recover and take out that 2,900 high. And if they do, that is going to drag Canada-yen higher with it.

So I would allow for prices to maybe move down towards 83.20, 83, and add or build positions from there. But if that's correct, and if we're stopping, let's say, down at, let's call it 83-- let's say we correct down to 83-- I would say that the minimum upside target-- again, just using some Fibonacci and Elliott Wave points to use our price projection-- we would come in with a minimum upside of anywhere from-- add the ratio price in there-- we're currently trading at 83.40 I would say we're heading towards 85.21 all the way up to perhaps 86.60 in the days and weeks to come.

And again, just using a very simple routine here within the MotiveWave charting platform, which really does help streamline and make your Elliott Wave and Fibonacci analysis far more efficient, all I'm simply doing is having the software measure the length of wave 1 and then automatically project it from the end of wave 2, wherever wave 2 happens to be right now. I just have it in assumption that it's going to be ending around 83. But it will automatically measure that for you, hence coming up with the 85.20 and/or 86.60.

What I think is a better way to do it is rather than focusing in on those 2 price points, look at the range that those price points offer you, and then manage the trade accordingly. But either way, it's a really solid setup. I do see the overall market moving higher, that meaning the S&Ps, XLF, and, of course, XLK. If that does begin to play out, which I believe it will, that's going to drive Candida-yen higher.

And I think these are some fantastic trades that if you're patient over the next several weeks, and perhaps even into the latter stages of 2019, are going to offer some really robust returns. This has been David Floyd with Aspen Trading Group on behalf of Real Vision Television I'll be back next month with another edition of the Technical Trader series.