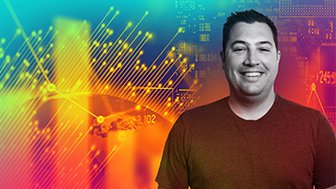 J.C. Parets, CMT, of All Star Charts analyzes the U.S.…

The Dollar’s Next Move

"It's mob rules when it comes to price action," according to Bob Iaccino, co-founder of Path Trading Partners. In this episode, Iaccino unpacks key concepts in technical trading, using copper price action in the wake of China trade negotiations. Concepts include: Price channels, clear paths, and viewing a trade through multiple times frames and moving averages to shed light on price action. Filmed on March 26, 2019 in Chicago.

BOB IACCINO: Hi, I'm Bob Iaccino, co-founder and chief market strategist at Path Trading Partners, with another edition of Tech Trader TV for Real Vision. Today I'm going to talk about copper and what I'm seeing from a price action perspective in copper. Copper has a nickname, Dr. Copper. They say that it has a PhD in economics.

But currently, when you're looking at copper, you're looking at the Chinese economy. Copper right now is serving as the canary in the coal mine as to whether we're optimistic or pessimistic about a potential US-China trade deal and even down to minute detail of how good of a trade deal it's going to be, specifically for China but just in general. Lately, we saw a copper rally for about seven straight weeks. And now it's been weakening, and the charts are telling us something as to whether the economic backdrop is positive or negative for this deal getting done and subsequently for the economy of China.

China is the largest consumer of copper. And again, we can look at copper to get clues as to what the fundamental backdrop is going to look at. So let's take a look at a copper chart and what I'm seeing technically on this particular base metal.

All right, so what you're looking at now is a daily copper futures chart. This is a May chart. Starting at the top left here with this high of three spot 3155, we had about a 23% drop from the middle of June of last year down to about the middle of August. Since then, we've rallied up, if you take it to the highs of the recent highs of this move, you're looking at about 16 and 1/2 percent higher, a little bit more than that.

Now, lately, what's happened in the last two, three weeks or so has been this down move here. If you go back fundamentally and understand what was going on, this 23% drop was the meat of the tariffs. Some tariffs had already been placed and were starting to be doubled or threatening to be doubled. New tariffs were threatening to be put on, and that was really the sell-off.

As I mentioned, China's the biggest consumer and smelter of copper. If China's economy's going slow down, there's going to be less demand for copper. It's very simple fundamentally.

Then we went sideways, as no new tariffs were being applied as the 90-day truce came into effect right around here. And that's what tends to happen with base commodities. Input commodities like crude oil are the same. Base metals, not so much precious metals-- they tend to collapse quickly. But then when they rally back, they tend to move sideways and then up, sideways and then up.

So what we're trying to figure out right now-- is this particular move going to fall back into the old channel? And then we have to widen the channel entirely to represent these two red lines? Or do we think it's going to base here and then move back up as it did in this particular channel here? So in order to see it more clearly, we're going to go to a different frame. That's a big part of what we do is multiple time frames.

Now, again, I have these green/blue lines representing the old channel, which was right here. The red dashed lines that you see represent the extent to which each little breakout out of that channel has happened. Now, why do I have those highlighted? Well, this gives me a little bit of clue that the upside may not be over yet.

Why is that? Well, it's a concept we use called a "clear path." A clear path is a consecutive series of same colored candles that the market tends to want to fill in.

Entering back into this channel that it was in prior, this natural propensity is to go to the top of the channel. Again, look at what it did when it entered this channel over here. It went to the bottom of the channel, and then it considered its own move complete.

It doesn't necessarily mean that the fundamentals deem that the price should be here. It means that the speculators in copper and the hedgers in copper all feel it's going that way. It's mob rules when it comes to price action. That's why price action matters.

Now, where would this be wrong? About the middle point of this channel. So in this particular case, it'd be about two spot 74. If it got below that, then the extension would probably not happen anytime soon. If it got above it, you can expect it to get there.

So essentially, what price action in copper is telling me is that we're likely to go higher. And that means a US trade deal is probably in the future. I wouldn't say it's imminent. We're looking at a weekly chart for that clarity. The weekly chart's longer duration, so it might take longer for this to play out. But price action is telling me that copper is more likely to go higher.

I'm Bob Iaccino from Path Trading Partners. This has been another edition of Tech Trader TV from Real Vision.