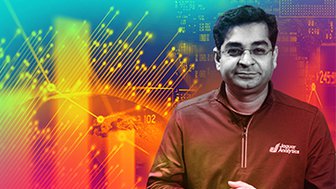 Steve Strazza, co-founder of The Chart Report, notes the upside potential in transports and discusses one specific stock to make the play: Kansas City Southern. He analyzes the current trends using technical analysis, highlights the sector's strong historical correlation to industrials, and reviews how to make the trade. Filmed on April 24, 2019 in New York.

STEVE STRAZZA: Hi, my name is Steve Strazza. I'm a Co-Founder of The Chart Report. It's a pleasure being back on Real Vision today. Last time I was here, I talked about the safety trade. And today I want to talk about the complete opposite, which is rotation that we're seeing into more offensive sectors of the market. So let's dive right into it.

The first slide here I have just shows returns since the market topped in September. What you're seeing here is basically a reiteration of the point I made last time I was on Real Vision which is that defensive sectors of the market, the more risk averse or bond proxy sectors such as utilities, REITS, and staples, have actually been outperforming the broader market since prior to Q4, prior to the correction last year. We're starting to see that trade unwind a little bit. And we're starting to see investors kind of embrace risk a little bit more and cycle into more of the offensive names, such as cyclicals like industrials.

So in this chart, you see the three Dow major averages-- utilities, industrials, and transports. So these are the returns since the market's top. You see utilities outperforming. And you actually see transports and industrials are negative. That was the safety trade. What I'm saying today is that's coming to an end and we're seeing a shift into more cyclical areas of the market, such as transports.

Just using these three Dow major averages, you can really clearly see this shift in risk appetite as now utilities are only up 8% year to date, which is less than half the return of the transports, which are up about 20%. And then you have Dow Industrials about right there in the middle. So I think this outperformance from the defensive sectors is in its final innings.

We often have a conversation, what are the best or strongest areas in the market, right? Is it things that are at all-time highs or is it areas that have rallied most aggressively off of the lows? Well, the real answer to that is both. And, today, I'm going to pitching a trade idea on railroads, which has rallied aggressively off the lows as much as any other subsector really and is also at new all-time highs.

So the main idea here is that when equity markets trend, they trend together. John Murphy taught us this in his book on Intermarket Analysis. They usually trend globally. So domestically, they'll trend even stronger and that correlation will be even more pronounced.

So what I have here is a chart of the transports and the industrials. Going back to 1990, their returns are 815% for transports, 850% for industrials. So, I guess my point here is that despite the fact that transports are right now lagging a bit-- we have Dow Industrials basically knocking on the door of new all-time highs, while transports are still about 5% off of those all-time highs-- I think we're going to see a catch-up trade in transports. And this chart kind of depicts that pretty well.

This next chart, we have the Dow Industrial Average on top in blue and the Dow Transportation Average on the bottom in red. So what this is showing is exactly what I just mentioned, how we're still kind of 4% or 5% off of those all-time highs from last year on the Transportation Average. Meanwhile, the Industrial Average is banging right up against those all-time highs.

So we don't want to be in an area like Industrials right now, which clearly has some overhead supply that it needs to digest and will probably consolidate and be range bound for awhile while it consolidates its recent gains. Something like transports still has some room to the upside to get back to those all-time highs. That's where we want to be participating from a tactical perspective looking out about one to three months.

Now, what this chart shows is using the three major averages, taking the risk on average, which is transports, and the risk off average, which is utilities, and I'm charting them against one another. And what this is showing you is that despite-- towards the end of this chart you see in the past six months or so, transports have really pulled in, but they've pulled back to a major level against utilities while utilities outperformed for those past six or seven months, starting last September, like we just talked about.

I'm expecting transports to catch a bid at this level of long-term support. It goes all the way back to the late '90s. Basically, this is a 20-year consolidation. If we break higher from here, transports could really have some legs relative to utilities. I think that would make sense.

If you look at this chart, again, we have a 30-year consolidation, even longer, dating back to the early '80s. It looks like a bit of a inverse head and shoulders. I think we chop around here and eventually resolve higher. But, again, you see the bullish momentum divergence in RSI. The idea here is that transports are going to outperform and we want to be in those strongest names.

This is just a closer up view of the same chart. This is just going back about 20 years instead of about 35, 40. You could see that bullish momentum divergence much more clearly in this chart. And I think that that's going to end up being a failed breakout-- what I have circled in red right here-- and then we're going to move higher off this level and start making new all-time highs in transports versus industrials.

Now, let's drill down and see this rotation on a sector level. This is a daily relative rotation graph. What you can see here is industrials, right in blue, moving right into the leading quadrant. OK? That's exactly the type of action we want to see.

Up and to the right is the slope that you want to see on a relative rotation graph. It's just that clockwise ocean that's most bullish. If you look at something like IYR, which is REITS, or health care, which has really taken a beating lately, those are bearish trends in the relative rotation graph. So we want to be in areas like XLI or even XLE or XLF, things that are moving up and to the right.

Within the industrials space, we can see a couple subsectors really stick out to us. Where in industrials do we want to be? What are the strongest subsectors, right?

So I've plotted diversified industrials, truckers, aerospace and defense, airlines, transportation services, and transports and railroads here. As you can see, we have a very bullish hook in both the transports DJUSIT right here on the chart. And we also have a bullish hook in railroads, which is the lighter blue.

What this means is that these subsectors were actually leading on a relative strength basis. And without ever moving into the lagging quadrant, they just kind of waned in momentum and weakened a little bit and then reversed right back into leading. That's very bullish action. And those are the kinds of subsectors or areas of the market that we want to be participating in.

So let's drill into railroads and see if we can find some opportunities in the industry itself. Here's rails versus the S&P 500. As you can see, beautiful consolidation coming off those 2014 highs. We really moved down pretty aggressively into 2015 and 2016, but have since reclaimed the prior highs and are continuing to move higher in what looks to be a pretty steady uptrend just stair stepping higher here against the S&P 500.

So our idea is that railroads are going to continue to outperform. We want to find the strongest names. And that's how we want to play this trade.

So my point here is kind of, well, looks like all the rails have left the station for the most part. We don't want to be chasing these uptrends that already broke to all-time highs a few weeks ago and are already halfway to their price target. We want to find something that's fresh and has a really clean setup right now. That's Kansas City Southern.

So if you look at this chart-- this goes back to about 2010-- you see a nice uptrend leading to about 2013, and then about five, six years of consolidation. OK? So we have stopped at the 126 level, one, two, now, three times over the past few years.

What's different about this chart than the other railroads that I just showed is we actually have a nice, long consolidation phase here. The way it was taught to me is the bigger the base, the higher in space. So I like seeing this four or five year consolidation. When it eventually resolves higher, it should really have some legs. So we want to be buying strength on a chart like this. It's also very bullish and worth pointing out that RSI's been in a bullish regime for over 10 years on the weekly 14 period RSI. It hasn't been oversold since 2008. So this is a very healthy consolidation. And we want to be buying strength here.

So I think this is the type of trade that you want to be in. And you want to respect those levels in order to maximize your risk reward.

I'm Steve Strazza, Co-Founder of The Chart Report. Thanks so much for having me on Real Vision. I hope you enjoyed my trade idea.