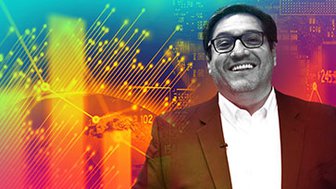 Coming off of an unusually volatile summer, Dave Floyd of Aspen Trading Group provides an overview of recent market moves and forecasts what lies ahead in September. He breaks down the options markets for the S&P 500, before moving on to two major currency pairs. Filmed on August 28, 2019 in Bend, Oregon.

DAVID FLOYD: Hey there, traders. David Floyd here with Aspen Trading Group on behalf of Real Vision and the Technical Trade series. It's August 28th, and normally, at this time of year, we'd be dealing with a very quiet sleepy summer market. But this year, of course, is the exception to the rule. I've been in this business for over 20 years, I think this is probably the third summer in all those years, which was actually decent to trade. In fact, August has been a great month in terms of trading not only in the FX markets, but also in the S&P 500 futures, and a couple of handful of individual stocks, but I have found many more trading opportunities in the larger asset classes like the S&P 500 and of course FX.

What I want to do in today's video is a little bit of a departure from what I normally do. I'm going to highlight one particular trade setup and show you where my stop would be, the rationale for why we're getting in and where I think the price target would be. I think it's far more important given what the markets are doing is to give an overview of what's happening, and what we might expect going into September. And of course, the fourth quarter.

The chart that I have up right now, at least that's our starting point is the S&P 500. And as you can see, we had that big selloff in early August. And since then, we've just been chopping back and forth. Obviously, people are wondering, okay, was that just a temporary, push lower? And given that the Fed is going to be lowering interest rates, are we going to repeat the same old process again, which is equities get bid higher, because the Fed is going to keep policy accommodative? It's possible.

But since then, all we've really done is chopped back and forth for all of August. So there's been some great trading opportunities. But from an investment perspective, it's hard to gauge whether or not the market feels as though we've run too far, too fast over the last few years, and that maybe now prices are going to start adjusting to a changing environment, meaning a slowing economic environment. We have inverted yield curves, we've got a lot more volatility on the trade warfront. So perhaps the markets taking a pause here.

And what I'm going to outline today is that I think we should be cautious going into the fourth quarter and certainly into September. That doesn't mean that the market's going to sell off dramatically, but it could. But what I'm seeing right now between options activity in the S&P 500, and the inverted yield curve, at the very least, we're going to get continued volatility and probably some downside action in between. So let's take a look what I'm looking at in terms of the options market.

One of the things that I look at on a day to day basis, essentially, is what the options market is doing in the underlying security I'm trading. So in this case, I'm happen to be looking at the S&P 500. But you'll see in this chart or in this table, it's actually listing all of the major world indices. But I'm focused right here on the basically on the S&P 500, of course, the Dow Jones and of course, the NASDAQ. And I know there's a lot of information on here, but the key thing I want you to take away is that from an options perspective, meaning the difference between what the implied volatility on the puts versus the implied volatility on the calls is trading it at basically historic highs, meaning that puts are far more expensive than calls.

Now, that doesn't mean that the market is necessarily going to move lower. It's just saying that overall, the bets that are being made are leaning heavily towards the bearish side. So what you'll see is that in all three of the major indices right here in the top, basically above 95, in the 95th percentile or higher, historically, that suggests that you get reversion in price action. So if the S&P is or close to the highs, and you've got the options trading at the 95th percentile, that's simply suggesting that price action could back off in the near term.

Now, if you look, if we do a graph of the S&P 500 in terms of that spread, you'll actually notice that when that spread becomes as blown out as it has been, meaning here, which was back in early August, S&Ps fell lower. Going back into December, same thing, S&Ps fell lower. Does that process repeat this time? It quite possibly will. I think at the very minimum, it suggests caution in terms of trying to load yourself up on the S&P 500 or load yourself up on individual stocks.

So I would be playing the market from a bearish or a neutral to bearish perspective, meaning that there's a good possibility that we might move lower again based on what we're seeing in terms of the options market. Doesn't guarantee that, but knowing that at least put you in a position where you're not going to likely get blindsided by being too heavily overweight, being long stocks, or in this case, may be long the S&P 500. Again, this is the context of what I'm talking about. It doesn't mean that there's not individual trades to be had that may only last several days, or a week or two, which may or may not be impacted by this type of analysis. But I'm just trying to frame the overall backdrop.

The other thing that's really important, too, and we've been hearing about it all in the news lately is the inverted yield curve. And there can be a little doubt that we have an inverted yield curve by simply looking at this. We've got all the way up about to the 10-year where we've got prices inverted. Short term rates are higher than longer term rates. That historically has suggested a recession within one year. That may be the case, this time around. That's unknowable.

What we do know, at least from a quantitative perspective, that when we get an inverted yield curve, at very minimum, we get a lot of money volatility, and we've been having a lot of that in August. And until that yield curve flattens out or uninvert, so to speak, I expect the volatility to remain. So S&P options, inverted yield curve, that suggests that we've got a traders market developing or will continue to develop.

Here's how I'm looking at the S&P 500 at least in the near term. I do think that we're probably still carving out an overall correction from that big push lower in early August. I'm looking at this at right now as a Wave D triangle. So I'm expecting prices probably to move a little bit higher towards 2900, 2920 or so and then have another thrust lower in Wave C. We've had some great trades in the S&P 500 when we gapped down on August 25th. We were buyers at 2922. Sorry, 2822, scaled out at 2877. Bought them again today at about 2855, scaled out at about 2875. So there's great trading opportunity.

I think, though, that the upside is going to be limited to the 2920, 2900 level. If we get up into there, I think traders who want to be more position oriented might want to consider being short, because if I'm correct, and this is a B Wave triangle, that means the S&Ps are going to be heading down towards 2700 and perhaps lower.

FX markets. Again, like I said at the beginning of the video today, I'm keeping my focus squarely on the broad indices like the S&P 500 and the major FX players. There's plenty to do there without having to spread yourself too thin looking at other markets. In terms of the Euro, pretty straightforward here. I'm expecting the Dollar Index to move lower in the days and weeks to come. And I'm expecting that the Euro, which had that nice spike up on August 25th, I'm expecting that the correction that we've seen since then down into the current levels at 110.80 I think will begin to move higher on a retest of the August highs at around 112.40 and higher. Certainly well within the cards.

We've been long the Euro here at Aspen Trading for about a week or so now at 110.78. I'll look to add to that position above 111.20. But I do think this is a really, really solid trade that's unfolding. And I've got stops down at 110.50. You can also look at Dollar/Swiss, it's the mirror opposite. I think there's some good opportunities on being short Dollar/Swiss, which of course is a play on a weaker dollar as well. So whether you want to be long the Euro, or short Dollar/Swiss, it's basically the same play.

But I see that big spike lower on August 25th. I see that as a very impulsive move, this move right here down. We've since retraced in a very choppy corrective manner right into the 61.8% fib retracement. I expect that the next move lower or the next move will be lower. And that'll probably take us down below 96 and lower. Stop's above 98.77. Again, very reasonable reward relative to the risk.

So basically, I see three trade setups here. You can be long the Euro, short Dollar/Swiss, you might want to be playing the S&Ps to the long side up into the 2900, 2920 level. But I think the real key trade could be getting short the S&Ps into that 2900, 2920 level and expecting a bigger move lower. And that might happen after Labor Day once everybody gets back into the swing of things so do expect the market to get a little bit quieter as we wind down the week ahead of Labor Day. But again, we've been surprised- pleasantly surprised all this summer, expecting quieter markets and they've been anything but.

This has been David Floyd with Aspen Trading Group on behalf of Real Vision TV. It's going to be an interesting fall, folks. I'll be back in early September with another video update. Until then. Trade well.