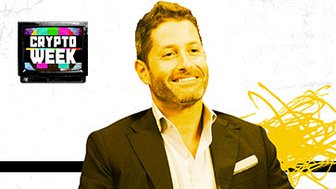 Barak Ben-Ezer, CEO and co-founder of SFB Technologies and The…

The Creators of Crypto · Featuring Barry Silbert and Raoul Pal

Barry Silbert, founder and CEO of Digital Currency Group, and Raoul Pal, CEO and co-founder of Real Vision, discuss the future of Bitcoin, its role in a new financial system that’s being built right now, and its potential to replace gold. Silbert argues the combination of speculation and the next recession will be a trigger for Bitcoin's popular acceptance. This clip is excerpted from a video published on Real Vision on June 17, 2019 entitled "Top Crypto Investor Looks Forward."

BARRY SILBERT: So we, as Digital Currency Group, my company, we've invested in 145 companies now. So we're the most active investor in the space. And so we have pretty good visibility and insight into what's working and what's not working. And I continue to believe that the number one use case is speculation right now.

And that is not a bad thing in that one, I think Bitcoin is going to-- controversial opinion here-- is going to displace gold over the next couple decades in terms of the role that gold plays in a portfolio.

RAOUL PAL: We will come back to that whole topic.

BARRY SILBERT: Yes, we will. But separate from the store to value kind of gold play, I think that in order for Bitcoin and digital currency to provide the utility that people are excited about from a cross-border payment perspective, remittance perspective, all the friction that could be eliminated by the free movement of money around the world, it's not possible unless the size of the asset class is larger, unless there's more volume and velocity in on-ramps and the off-ramps. So initially, the number one use case is speculation.

As the market cap grows, you have more liquidity going in and out of different Fiat currencies. And eventually, you'll have the ability to operate-- as an individual or as a business-- exclusively in Bitcoin or digital currency and completely eliminate, or bypass the middleman and all the friction, or all the cost. But none of that becomes possible-- you can't create a better financial system that eliminates all the friction and middlemen when you only have $125 billion asset class that trades $5 billion a day. It's just not big enough.

RAOUL PAL: And that's an interesting point. So you think that speculation is one of the good ways to build the cult--

BARRY SILBERT: It's really two things. One is, if you buy into my hypothesis that Bitcoin is going to displace gold--

BARRY SILBERT: So you're trading into an opportunity. So there's $8 trillion of gold and then there's $125 billion in Bitcoin. So that's one play.

And that investment thesis is a little-- it's a different analysis. The gold analysis is, OK, what is the probability that it captures some of $8 trillion? And then you discount that back and you say, OK, it's got a 5% chance it's going to happen that is going to capture 25%, so you could do the math, it's still a big number.

Whereas if Bitcoin becomes the underpinnings of the new financial system, all of the value that gets tied up in Bitcoin as it's moving around the pipes, it's like a working capital analysis. And so if there's 5, or 10, or $100 billion tied up in the Bitcoin system, assets being used for all these use cases, you can make some assumption as to what the value of the asset class would be at that point. And that's not even valuing the blockchain use cases, using the database for recording ownership around digital rights, and identity, and all the crazy ideas that we've invested in and you've heard about.

RAOUL PAL: Sorry, can you think that therefore Bitcoin, thinking through your idea with gold and other areas is, you need to think of it in terms of option value? What is the probability of it ending up replacing gold and then trying to impute that? My guess is, you could probably apply some sort of option pricing model and come up with some fair value, whatever that means.

BARRY SILBERT: Right. And the small changes in your assumptions have a pretty meaningful impact--

BARRY SILBERT: --on the outcome. And look, that's why Bitcoin will move up or down 5% or 10% in a week, because the very small changes in money flow, very small changes in perception changes the probability of that ultimate outcome. And so again, with gold as, in my opinion, the number one use case-- or digital gold-- $8 trillion relative to $125 billion, for you to double your money in gold over the next couple of decades, it's essentially a bet against the dollar. It's a bet against fiat currency.

It's certainly my belief that Bitcoin would perform well in that environment. But really more importantly, if the world doesn't fall apart and if the value of Fiat and the US dollar doesn't collapse, Bitcoin could and should still perform really, really well because you're investing in this new financial system, this technology, this community, this restructuring or rebuilding of the way that value moves around the world. And gold is never going to have more utility. It's just going to-- or not-- be perceived as this store of value that you put in your portfolio that would perform well in periods of financial dislocation.

RAOUL PAL: You know, people used to trade the gold, silver ratio for a long time. And one of the reasons why silver often outperforms in certain times is because it has two values. One is the precious metal value and the other is the industrial value, because people use silver for a lot of stuff.

I mean, you kind of think of Bitcoin in the same way.

RAOUL PAL: It should hyper-outperform in that kind of magic scenario of devaluation of Fiat currency, which probably at the end of the next recession we're going to see some formats of. But also, it has to price in the optionality of the future financial system, which as you go into recession and you get to more extreme monetary policy, the probability explodes of having to choose a different outcome.