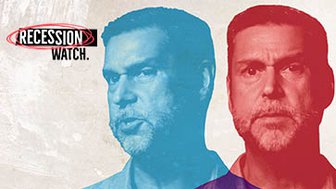 Is Recession Coming? – With Raoul Pal

Physical Gold through the Coronavirus Chaos

Physical Gold through the Coronavirus Chaos

The Collision of Crypto and Fiat

The Collision of Crypto and Fiat

Gold and Coronavirus: The Party is Just Getting Started

Gold and Coronavirus: The Party is Just Getting Started

Coronavirus and Credit: When the Music Stops

Coronavirus and Credit: When the Music Stops

Market Makers & Coronavirus: The Mechanics of a Market Sell-Off

Market Makers & Coronavirus: The Mechanics of a Market Sell-Off

Drilling Down on Long Vol

Drilling Down on Long Vol

Meet the “Merchant of Simplicity”

Meet the “Merchant of Simplicity”

The “Third Rail” of Pensions: Politics, Problems, and Solutions

The “Third Rail” of Pensions: Politics, Problems, and Solutions

Over the past two weeks, Raoul Pal has tried to determine the risk of a recession, and to gauge the potential consequences that could result. In this concluding piece, Raoul Pal explains what he's learned through the past two weeks of programming, and provides some insights about how best to invest both in a rebound scenario and in a downturn. Filmed on July 17, 2019 in New York.

RAOUL PAL: It's been one of the most interesting two weeks of programming we've ever done at Real Vision. I think it was really useful to come with a theme and test a hypothesis. And for me, personally, I find it incredibly useful, because what I write and look at this stuff, I operate in a vacuum, where I try to filter down the noises, and I try not to listen to too many people. But there comes to a point where you need to make a call. And with that, you do need to open up the filters a bit more and hear some more opinions.

And the way to do that is get the people that you trust. And again, as you can see from the two weeks program, it's not necessarily people with the same view as me. So I'm not trying to get confirmation bias in any of this. What I'm trying to do is have a nuanced understanding so I can understand where I'm right, where I'm wrong, and how to play it.

So I think over this week, I've learned that much like-- I set up a Twitter survey at the beginning of this, which was to see what people total probability was of a recession in the next six months starting. And it was split 50/50 basically. So of the, I think it was 5,000 or 6,000 people on Twitter who answered that short survey, everybody was split. And I think we've seen that from the programming over these two weeks, that people aren't quite sure where it's going to fall. People who look at the data itself tend to have seen some sort of stabilization in some areas.

That has made people pause. I remember Teddy Vallee was saying that some of his forward looking indicators might have turned up. But if we remember from ECRI and Lakshman, he wasn't so sure that he was seeing any pickup. He just didn't see the more determined deceleration of growth.

So it's not clear from those guys, whether we're going to see anything weaker yet. But when I speak to people like John Burbank, and I hear from people like Christophe Ollari and others, they're more concerned. And I think those are the people who've been paid to have the view. And I think that's interesting that they are starting to say, look, the balance of probabilities is for something much bigger.

For me, it's clear that you're going to make all the money from making this call, and you see a few of these. And sometimes you'll get them wrong, and sometimes you'll get them right. 2015 was one of the times I nailed it all the way down, and then I thought this is going to turn into a full recession, not just a collapse of the oil market and global industrial production. And that didn't happen because of the stimulus.

But we've heard over this series of shows that that stimulus isn't there. There is a real concern the Fed might be pushing on a string, as well, much like the ECB have been, that there's really nothing they can do that's going to generate the growth that we need to offset this. And I think the aging population dynamics and other issues are really real and meaningful.

But does that mean that the equity market is a bad place to invest? It's not clear yet what is going to upset that apple cart. But I do think that the wheels have been set in motion. My view is always that there is the general business slowdown, but then there's the one thing that tips things over the edge. And I think that one thing was tariffs. I do think that they were much more significant in their impact on psychology of businesses than anybody appreciates.

I also think that the dollar is a big risk in this equation. And I talked about it in the original expert view, and other people have referred to it. The dollar's been thrashing around in a very tight range. To me, as we're shooting this, I have a feeling it's going to break higher. I really do. It had every opportunity to break lower. We had the Fed cutting rates, the ECB cutting rates, everybody cutting rates. And every said, the dollar will collapse in that environment.

We've seen that. We've seen some sort of pause in the trade tariff negotiation issues. That didn't cause the dollar to go lower. In fact, I can't see anything that's going to cause the dollar to go lower than here. We're going into the Fed meeting, and I'll talk about that in a sec. But the reality is is if the dollar is not going lower, chances are it's going to go higher. It could get stuck in a range. But I don't think that-- the structure of the market to me feels like it's going to break higher. If it does, we know what to do.

I think the Fed behind the curve, and they need to cut 50 and 50 again, because of the number of factors that I talked about in the original program. But what's important now is what are the outcomes from that meeting? And how I look at it is this. If the Fed cut zero, nothing happens. I think that the dollar screams higher. The dollar screams higher, oil collapses, commodities collapse, global growth collapses, and the Fed are cutting 50 and 50 again super fast.

So I think if they don't cut, the bond market sells off very quickly and then rallies very fast along with the dollar. If the Fed go 25, I think it's a similar situation. I think the market may or may not be pricing in 25 or 50 at that point, let's say, 25. And the chances are that this moment you get the 25 cut, the market's going to go, what's next. We have to price and probability of another cut because the Fed never cut once.