Will a Recession Kill ETF Liquidity? 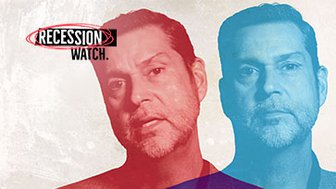 Raoul Pal, CEO of Real Vision, provides an update to…

Will a Recession Kill ETF Liquidity?

Hari Krishnan does not like ETFs. In this piece, the author and Doherty Advisors portfolio manager argues that products like the HYG give investors a false sense of security. In an adverse market environment, such products could see outsized declines, as the lack of liquidity in the underlying assets finally begins to matter. Krishnan also touches on the best way to hedge against a potential liquidity crisis. Filmed on August 7, 2019 in London.

ALEX ROSENBERG: It's really in recessions that market structure matters most. And that's something that you'll see in this piece where Hari Krishnan talks about the dangers of ETFs. He says that ETFs, like the HYG provide a false sense of security because there's a liquidity in the ETF that's not there in the underlying asset. So when things really start to go south, they can go south in a hurry because people are struggling to sell, institutions are struggling to get out of these products, and the underlying basket of assets that they actually want to sell is very hard to come by.

I think that this is a very useful piece as we continue to think about this recession question, as we continue to probe what in the market, where the states of vulnerability are, and also to think about how to hedge ourselves and protect against these worse outcomes. Because in addition to his market structure analysis, Hari gives a very interesting philosophical thesis about how you might want to hedge. So with that, please enjoy the full video from Hari Krishnan.

HARI KRISHNAN: My name is Hari Krishnan. I'm a PM Doherty Advisors in New York. And I focus on volatility strategies with an abiding interest in global macro.

Where are your biggest market volatility concerns?

I focus on two areas. And one of them was reflected in my first book. And the idea there was even though hedging is cheap in quiet markets, nobody seems to want to hedge when volatility is low. And investors are complacent. So what can you do progressively as market conditions get worse? To hedge in such a way that you don't overpay for insurance. That was step one.

Step two is more related to try to identify market tremors or market weaknesses, structural problems in the system. And that's the focus of the second book, which will be called appropriately enough market tremors. Really what I'm focused on are situations where volatility is low, but the embedded risks in the system are high. I've been trying to target things from an agent based perspective. Now, that sounds fancy. But really what I'm thinking of is trying to identify situations where markets aren't gyrating very much, but certain players in the market are becoming too big and too risky.

And we're in a situation where a small move in prices could trigger a large sequence of events that could be very damaging in the markets. I did a postmortem like many other people did, on the Vol Magadan in February of 2018. And there, it was fairly clear because you had ETNs dominating the system, and trading according to fairly structured rules as per their prospectus. And you could almost say exactly how much the VIX would explode given an initial impulse or impetus.

Here, it's a bit more authority, because I'm delving now into the corporate bond markets. And I think the agents are more diverse, but the situation is pretty ugly. And I'll go into that in some detail. You now have a situation where the high yield markets in the US are about, let's say, $1.25 trillion. The ETFs, the high yield ETFs, which are predominantly the JNK and the HYG and a few others, they account for about $50 billion.

Now, you might say, well, that's small, that's about 4% of the whole market. But if you look through the structure, you look through the system, you'll see that things could get dicey very quickly. Now, why is that? ETFs are chameleons, especially bond ETFs. The reference basket is a set of bonds, but they trade like shares. So people can easily get confused.

And I'm no- I've been a victim to this too, looking at the realized vol of something like the HYG, which has historically been about 3%, at least since the recent bull market and saying, oh, this is a stock effectively, that spits out a high dividend. And that can be traded in and out, intraday with a refresh quote every 15 seconds or so and so all sorts of strategies that you wouldn't think would be possible in the bond market are now suddenly possible, trading the HYG. This is a mistake. And the reason it's a mistake, and I want to pound home this point, that realized vol is not a true barometer of risk.

By saying that this is a very illiquid market, what underpins many of these ETFs, especially in the fixed income space, is stuff that doesn't move. It's either closely held by pensions, insurance companies and so on, or it's held by mutual funds who are very vulnerable to outflows. If you operate under the illusion that the ETF is trading like a share, you could be in for a rude awakening. Now, the question could arise, what could happen to the ETF? Why would the ETF trade in line with the reference index? And so on.

How can we better understand the problem with ETFs?

Now, let's say that the ETF takes a hit. It's trading far below the reference index value. In theory, the authorized participants should step in, buy the shares from the market at a discount presumably, and then deliver them to the provider in exchange for a basket of bonds. So in theory, if the ETF drops 1% below the reference index, they'll go in, buy the bonds- or get the bonds delivered, and then sell them into the market for an arbitrage profit. But that's on the presumption that the bonds themselves are liquid.

Now, these bonds are not very liquid. And what's happened in the marketplace is that the dealer community is no longer taking principal risk the way they used to. Now, you can look at this in the data. The Federal Reserve Bank of New York publishes primary dealers statistics. And what you'll find is that across the fixed income space, particularly in the higher yielding corporate bonds space, dealers will not warehouse positions. Whereas they may have taken a 10 million slug of bonds previously on a sale, now, they'll only take one or 2 million, and then try and find a buyer for the rest. This slows down the entire process.

Now, the problem with this setup- and again, I want to bang this point home as hard as I can is that you have high frequency traders and other algos involved in the ETF, imagining that those ETFs are trading like shares. And at the same time you have an illiquid reference basket. Now, you might say, well, how many flash crashes have there been? What could drive the ETF price down? One might think that we haven't seen anything since May of 2010. This is not true.

We've looked through the data and what we found is that if you look at limit down and limit up statistics, and you even take a semi-nasty month, like December of 2018, was a horrific month, the S&P was down 9% or so. But what you'll find is that there were 500 instances of limit down circuit breaking events in December alone, which is a huge number. And many of these occurred in the bundled products, the ETFs and ETNs. So, it's not hard to imagine that something like the HYG or the JNK could shank 5% at a circuit breaker would be triggered.

Now, if that were the case, what would happen? Would the AP step in? Would the dealers who've been appointed by the provider step in, buy shares at a 5% discount and then take delivery on the bonds? I would argue no. I don't think they would because a 5% drop on a $50 billion ETN complex or even on a smaller component, let's just take the HYG, would be at least a $1 to $2 billion sale of high yield debt would require that for the arbitrage mechanism to work.

Now, you may then go in and say, well, bid ask spread seem ties. The high yield bond market seems healthy, the corporate bond market at large seems healthy, everyone is issuing corporate bonds. We've had this massive transformation where many corporations in their treasuries are acting aggressively. They're issuing corporate debt, they're either using it as a mechanism for the repo markets, or simply as a way to buy back their shares or engage in other activities that are constricting the supply of stock and ballooning the supply of debt. In theory, this should mean that debt is attractive, it's abundant, and it's liquid.

And again, if you go into the databases, you'll see tight bid on spreads. But again, one should not be confused, as I've mentioned, ETFs give the illusion of a share price for a stock price world in an environment where the biggest growth area is bond ETFs. And when quotes are made in various databases for bonds, these are indicative only. There's no guarantee that you can get filled anywhere close to where the quotes are given.

One can easily imagine a situation where a $2 billion sale of high yield debt, if it were necessary, would trigger a 5-point down move in the reference basket of bonds. This would be disastrous. Investors are looking at things like the HYG and seeing a 3% volatility number around it, which is very low. Again, this is an illusion