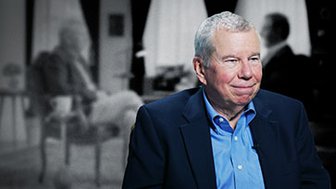 Dan Morehead sits down with Dan Tapiero for a comprehensive conversation between money managers about the most critical aspects of the crypto trade. Morehead makes the case for the 'Trade of a Generation', detailing specific currencies and protocols, future regulation, international money transfers, global custody solutions, and emerging 'Layer 2' protocols — which many in the space believe will power the next generation of blockchain solutions. Filmed on November 8th in New York.

DAN MOREHEAD: Yeah, so I think the reason I'm excited about Bitcoin is when you have a disruptive technology, they call it a category killer. Bitcoin's a serial killer. It's going to go through 40 or 50 different industries, well storage, cross border money movement, property titles, voting rights, identity. Those are all the biggest use cases on earth.

DAN TAPIERO: Good afternoon, everybody. I'm Dan Tapiero of DTAP Capital, GBI, Gold Bullion International. Today, I'm happy to be here with an old friend, one of the few guys with a strong macro background who is in the Bitcoin world, Dan Morehead, and I have to say we've known each other probably 20 years, so this might be a little lighthearted chat as well. Now, Dan was the first traditional macro fund manager to identify the Bitcoin opportunity.

Just so the audience understands, what that means is that the macro world that we're in is filled with some of the greatest investors of all time, George Soros, Julian Robertson, who we both worked for and Dan was the sole manager in this space to identify it and execute on it in that world. Of course, others followed. Some of our contemporaries as well. I think generally, as a macro guy and looking out at the Bitcoin world, Dan is one of the guys on the Mount Olympus. I know I said that the other day and you chuckled a little bit, but from our perspective, the guys who saw the opportunity but didn't execute and transact on it, Dan really lead the way. With great pleasure, I introduced Dan Morehead. Dan.

DAN MOREHEAD: It's great to be here. Thanks.

DAN TAPIERO: Yeah. Why don't we just talk about that initial moment? There's a lot of-- you've done a few interviews and I've watched them and I don't want to go over the same stuff like, what was your Bitcoin moment, but in a way, having your macro background, what in that allowed you to see that Bitcoin was a great opportunity?

DAN MOREHEAD: Yeah. In macro, we're always traveling around the world looking for asymmetric opportunities. You put $1 in, you might be able to make five or 10, but you can only risk one. There are a few those that come along. Every three, four years there's something like Russian privatization or Argentine farmland or Tesla Motors. There's a trade like that that comes up. That's been a fun experiences. Tiger and my career before that, looking around for those things, and then in 2011, my brother introduced me to Bitcoin. It took a while to get my head around it.

There was only a few things on the white paper and Wikipedia was like a half a page. I thought, oh, yeah, that's really great idea. I hope it happens, but didn't really do much about it. The funny bit is that was back when they were giving away free Bitcoins. Gavin Andreessen, who was the chief scientist of Bitcoin had a thing called the Bitcoin Faucet and all you had to do is log in and get free bitcoins, that's how fuzzy that thing was.

Then in 2013, Pete Berger of Fortress and Mike Novogratz, who I'd worked with and gone to school with, called and said, hey, we're starting to think about Bitcoin, you want to have a coffee and talk about it? After about an hour, my head was starting to spin. I basically just focused on it for the next three or four months, didn't do anything else other than read about Bitcoin and I can't believe it's the biggest trade of our generation, so I'm all in.

DAN TAPIERO: Yeah, but how did you-- I understand you did the digging, but there are a lot of macro guys just as smart, they didn't quite make that adjustment, they couldn't quite see it. Bitcoin to me is different than those other macro opportunities because you could still use a traditional macro framework for understanding it. Yes, a symmetric risk reward etc., but what was it that pushed you over?

DAN MOREHEAD: Yeah, so I think the reason I'm excited about Bitcoin is when you have a disruptive technology, they call it a category killer. Bitcoin's a serial killer. It's going to go through 40 or 50 different industries, well storage, cross border money movement, property titles, voting rights, identity, and those are all the biggest use cases on earth. If you think about somebody who invents like a new medical device, and there's only 100,000 people on earth that have that condition, it's pretty kept on with that medical device's worth.

This is going after the biggest things, 300 billion of electronic payments, remittance. Well storage, gold is your well where $7 trillion market cap, and even currency, currency is 100 trillion market cap. All of the cryptocurrencies combined are a quarter of a trillion. That's the leverage I'm talking about, you're starting with such a small base against an enormous opportunity. Even if blockchain fails that 10 of those use cases, there's still 40 other use cases it's really good at and that's why I think it's the trade of a generation.

DAN TAPIERO: Why do so many smart guys still resist it? I can go through various examples, while one of my old mentors even went on TV a month or two ago and said, I just don't-- a guy in his late 60s, very well known, I just don't get it. I want no part of it.

DAN MOREHEAD: Yeah. One of the rationales is we already have a currency, the US dollar. Why do we need to currency? My argument to that would be yes, you and I live in the United States, we have solid financial system, we have a currency that only depreciates 90% over the last 80 years, so it's not as bad as some of the other currencies out there. But keep in mind there's 200 currencies on earth and bitcoin's just to a one. There's a lot of people that are--

DAN TAPIERO: But a global macro guy should get that. What's stopping them? You know the crowd? Our old crowd.

DAN MOREHEAD: 6 billion people live in countries with really crappy currencies. They vastly benefited by using Bitcoin or another cryptocurrency. Sometimes, I think people just resent something that's an asymmetric trade that they missed and maybe this is a bit of a West Coast, East Coast thing. Like every Lyft driver in California is talking crypto and Wall Street people are probably more negative than people on the West Coast.

DAN TAPIERO: Right, and that's where traditionally the financial macro guys have been and are so. That's interesting. Is that also an age divide thing?

DAN MOREHEAD: Yeah. I think there's a big age divide, obviously, millennials have grown up, VenMo and everything and totally living on their phone and mobile money makes sense to them. Then the older generation might be a bit more reactionary. A good example of the negative opinion from very famous investors, Warren Buffett has been a fantastic investor but on Bitcoin, he's been super negative. He likes to call it rat poison.

DAN MOREHEAD: I think he caught up, but at least a year ago, he's still doing it. My point would be when he