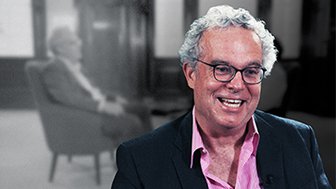 John Hempton, CIO of Bronte Capital, is one of the…

Tesla, Japan, and The Hunt for Red Flags

In her long-anticipated return to Real Vision, Stephanie Pomboy, founder and president of Macro Mavens, sits down with Grant Williams to discuss her global outlook after the Fed’s recent course-reversal. Pomboy and Williams take a deep dive into the significance of the gaps between various economic indicators, and discuss the implications for capital markets. They also touch on associated topics such as China, cryptocurrencies, and gold. Filmed on April 18, 2019 in New York.

STEPHANIE POMBOY: If this is the underfunding situation now, when we're arguably at the peak of economic and financial activity, what is it going to look like when, heaven forbid, the market actually sustains a downturn? It's remarkable, the complacency around the corporate sector's ability to service all of this debt. It's going to take people a while to wrap their heads around the size, the sheer magnitude, of money printing that's going to be required.

I'm about to have a long overdue conversation with my dear friend, Stephanie Pomboy. I've been trying to get her to come back on Real Vision for a long, long time, and she has resisted for reasons best known to herself. But there's a whole bunch of stuff we want to talk about. I'm going to ask her why she resisted, and she's going to blame me. But don't believe her.

The Fed, corporate bond markets, junk bonds, equities, there's so much going on. And Steph does some of the best work out there on all of it, much to her chagrin. She's going to hate me saying that. So let's go and sit and talk to Steph.

STEPHANIE POMBOY: Here we are.

GRANT WILLIAMS: Here we are again. Now this has taken a long, long time. Personally, I blame your almost pathologically misplaced modesty. You're probably going to blame me.

STEPHANIE POMBOY: We made it.

STEPHANIE POMBOY: Pleasure to be here.

GRANT WILLIAMS: It's been far too long. So, so much to talk about. And as you and I tend to do we get together, we have to start with the Fed, right? It seems the logical place to start because from the mails or the Fed, all sorts of things tumble out. So I've got to ask you, what do you make of Powell's flip-flop? How important is it? Or are we wasting our time worrying about it?

STEPHANIE POMBOY: It's amazing to me the speed and magnitude of the turnaround. You know, at the end of October, they were debating whether they were going to raise rates two times or three times and everything was fantastic. And in the span of six weeks, now they're talking about not just-- not raising rates but pausing the balance sheet, unwind, et cetera. And what's been stunning to me isn't even that the Fed reversed course but the way the markets interpreted that.

It's going into it when they were talking about raising rates two or three times in 2019, everyone was saying, hey, this economy is so strong we can handle the higher rates. You know, bring it on Fed. And then when they flipped in, you know, whiplash-inducing fashion, the narrative was, oh, this is great because now we're going to continue to get liquidity.

STEPHANIE POMBOY: So there was no reflection on why they had to abruptly reverse course and what that says about the fundamental state of the US economy, and more broadly-- from our long discussions about the Fed-- how they can ever extricate themselves from this box that they've neatly drawn around themselves, where they can't ever raise rates. We got 10 year Treasury yields just above 3%. And you can feel the economy is starting to shake like an old car on the highway.

GRANT WILLIAMS: But, I mean, I think that's exactly it. They've built this trap around themselves. I remember putting a picture a couple of years ago of the central bank governors-- Bernanke was in the chair at the time-- in a corner with a painted floor where the last bit of floor of the painting was right in front of them, and that seems to be what they've done. And yet, for now, they've gotten away with it, which I'm just-- I'm just baffled by it.

STEPHANIE POMBOY: It is baffling. You know, they've demonstrated a perfect record and getting it wrong every time. And yet the markets continue to adapt to them with some great gift of insight and ability to navigate us through any kind of economic or financial shoal, all evidence to the contrary.

GRANT WILLIAMS: Right. But is it that? Is the market thinking that? Or is the market-- I think liquidity cheering thing is just that. It's, OK, almost as if they kind of expected this to happen. We're going to keep going. There's no way they're going to get these four rate hikes away in 2019. So we'll kind of keep buying. We had that wobble in December. And as soon as they about turned, it was like, we knew this would happen.

STEPHANIE POMBOY: Right. The status quo is great as far as Wall Street is concerned. What happens in the underlying economy is almost irrelevant at this point, as long as you keep the liquidity pumping and there's cheap credit to buy back shares, what's to stop this game from going?

STEPHANIE POMBOY: Well, let's talk about those buybacks because that's such a massive component of what's going on. I don't have the numbers to hand, but the percentage of the advances that are down to share buybacks is, I mean, so staggeringly beyond anything you could have imagined. But, again, it's hard to see how people aren't looking at this and going, this is a terrible thing.

STEPHANIE POMBOY: Well, the numbers are staggering. And it really-- the corporate sector, I guess, is the largest purchaser of stocks in the post-crisis period. I was looking at-- we have seen this ballooning in corporate debt in this whole recovery phase. And I was looking at that relative to buybacks because we all know intuitively that buybacks have been debt financed primarily. And the numbers are actually even more remarkable.

So according to the Federal Reserve's flow of funds numbers, there was $3.3 trillion increase in corporate debt.

STEPHANIE POMBOY: Buybacks over that same stretch were $3.4 trillion. So [LAUGHS] I mean, the numbers are just truly staggering. And one window that I think is really important into the role that buybacks have played is the difference between S&P earnings numbers, which are heavily flattered by these buybacks because they're per share earnings numbers, and the profit numbers reported by the government as part of their GDP report. And this is super wonky. Only nerdy economists like me would look at this.

But it's been amazing to watch the gap between those two measures expand. We had this huge obviously 24% increase in S&P earnings last year, and the rule to which that was influenced-- even notwithstanding the tax cut by the record amount of buybacks-- is so under appreciated. And it's had me worried that as we come into 2019 in that tax cut lift phase, people might start to realize, hey, the underlying fundamentals here aren't really that strong because while the S&P was reporting earnings of 24%, the broader government profit numbers were only up 7%.

That's a massive gap. And you've only seen gaps like that a handful of times in the last 50 years. And every time you've seen a gap where the S&P ran ahead of the government numbers, it's been ultimately reversed.

GRANT WILLIAMS: It's catch down or catch up. Yeah.

STEPHANIE POMBOY: The BEA, the government, has had the numbers, right? And S&P ends up moving back into alignment with it which will be really painful if it happens this time.

GRANT WILLIAMS: Well, and also the estimates for earnings growth, I mean, are plummeting, right? I mean, it was a great chart you put in macromavens which I shamelessly stole. And if I--

GRANT WILLIAMS: I would have tried to pass it off as mine, but everyone would have known that it was not me. But, I mean, it's-- I mean, these things are falling off a cliff. And yet, and yet, and yet--

STEPHANIE POMBOY: Right. The chart is, you've got the earnings revisions going down and the stock market just keep going up. And I guess part of it is that we're really kitchen sinking, if that's a phrase, the weakness into the first quarter. And if you look at that trend in estimates going out, they see earnings picking up. And then ultimately going back to double digits in 2020. So this is just temporary. You know, it's--

STEPHANIE POMBOY: Right. It's seasonal. It's the one time effect of the tax cut. So nothing to see here.