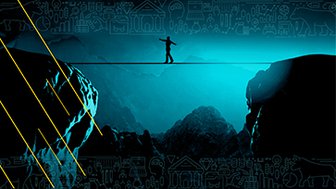 Passive investments have seen a huge surge in assets and…

In a world where two-and-twenty fee structures are dying and investors are moving more and more money into ETFs, active management seems like its on its last leg, right? This week, AK takes a look at the cutting edge of active management - from Uzbekistan to Las Vegas - to find the answer.

AK: We've already talked about the rise of passive investing. More and more investors are paying lower fees by hugging indexes. Well, what about the pros that live on these fees? What are these hedge fund Titans supposed to do? That's what we're going to talk about on this week's episode of The One Thing.

What's going on, investors? AK here. The classic hedge fund model is called 2 and 20. Basically, it's a 2% fee on assets and then a 20% fee on performance above agreed upon benchmark or hurdle. Let's say you're managing $1000 for me, and we have a 2 and 20 model in place. The benchmark does 5%, but you managed to do 10%. That means I'm going to have to pay you $20 for managing my money, and then 20% on the 5% performance you did above the benchmark. That's another 10 bucks.

This works out for everyone in this scenario, because my $1000 turned into $1070, which means I made $20 more than if I just stuck with the index, and then you made $30 out of the deal. But an agreement like that is tough to keep long term because we you don't do so well, I still got to pay you that 2% on assets. That means you still get the 2% even if you don't beat the benchmark and even if you lose money. If you stop beating the market, and that happens, you're going to be getting some angry phone calls from me.

Recently, with hedge fund returns slowing up and more people going into passive, hedge funds have been cutting their fees. Anthony Scaramucci recently talked about it on Real Vision.

LARRY MCDONALD: Is that where it is now?

ANTHONY SCARAMUCCI: Yeah, I think so.

LARRY MCDONALD: What's the evolution of the hedge fund industry?

ANTHONY SCARAMUCCI: It's like our society. The rich are getting richer. The hedge fund community, the people that have the assets, are growing their assets. And the other people are not. Look, a lot of ways, our fund of funds is like an outsource multi-strat. We'll outsource to who we think are the best and brightest in the space that we want. I think good players are going to get more money. Weak players are going to get blown out.

AK: We just heard The Mooch talk about two ways to stay competitive-- you can drop your fees, or you can be really, really, really good. If you can do both at the same time, that's even better, but there's also another option, you can be really different. Maybe you can pick tech stocks better than the next guy, but in all honesty, you're not going to do that much better than a tech stock ETF. Where can you go to find that edge? Well, Kiyan Zandiyeh of Sturgeon capital is going to Uzbekistan. Here he is explaining the opportunity as he sees it.

KIYAN ZANDIYEH: If you look at what has changed basically overnight, what happened was 2 and 1/2 years ago the previous president, which was leading the country for about 25 years, died. If you think of how the country was beforehand, there was a closed socialist economy, pretty much not like North Korea. It was completely isolated from the neighbors and from the broader world.

What happened then was when the president died, the prime minister became the president. The general consensus was that it would be a continuation of what was there before, but to everyone's surprise, overnight, he decided to completely reform the country, and has been quite aggressive and ambitious in the reforms that is taking place.

There are wide-ranging reforms which the government is undertaking. As I mentioned, the most significant one was the FX liberalization. What came alongside that was the capital amnesty where foreign funds could basically come back to the country at minimal tax rates.

AK: Uzbekistan's economic liberalization is providing a huge investment opportunity. If you're one of the rare hedge fund managers who have access to Uzbek stocks, then you might be in a really good position.

Along the same lines, Michael Schwimer, the CEO of Big League Advance, he's presented an unusual investment avenue where he can charge actually more than the 2 and 20 fees. Using advanced analytics, he's able to invest in a share of the future earnings of Minor League baseball player. This is the same analytics they used to beat Las Vegas oddsmakers. You got to check out the full interview to see what I'm really talking about, but here's a clip of Schwimer explaining it a little bit more.

MICHAEL SCHWIMER: 2 and 20's dying, how are you going to get 3 and 30? Well, I think this is going to work. I think this is- they are like, "All right, you can go try and then we can cut it down when you're not successful." Well, 5 weeks later, we raised $182 million. I actually had to return 52 million because there's only so many baseball players.

AK: Yeah, he actually had to return money to his investors because it's easier to raise money in some of these frontier strategies than to actually deploy it. His fund might be small, because it has to be but maybe he's an example of one of those A students that the The Mooch is talking about.

Another area that's become really hot is crypto. Will Peets joined Real Vision to talk about how institutional players look at the market.

WILL PEETS: The awareness, the knowledge, the understanding is materially higher than even just a year ago. I think it's becoming too big to ignore. Certainly, with Yale and a few other pension funds, or endowments entering the space, it's made it easier for others to reduce some of that career risk and headline risk of being the first mover into, again, a very new asset class where I say, majority of Western public is misinformed or underinformed at a minimum. I think that's progressing. I think we would have expected it would have happened more quickly, but it's directionally going in the right way.

TYLER NEVILLE: It's so funny. Like back in 2017, I think that was the big theme is institutional money is getting into it, but everyone moves a little bit slower than that and now, it's actually coming in, and it's like, no one cares. They're starting to, but--

WILL PEETS: Yeah, and I think we've still just at the tip of the iceberg of actual capital coming in. There's been a lot of announcements over the last year about the likes of Fidelity and backed, and now, you have TD Ameritrade and E-trade offering but those offerings are still-- they're just onboarding initial clients, or they're only offering it to a subset of institutional clients so you really haven't seen the floodgates open. You are seeing the groundwork as it relates to infrastructure being laid and these people are investing a lot of capital or these companies are investing a lot of capital to make these offerings available.

AK: On top of retail and classic hedge funds being interested in crypto, there's institutions like pension funds trying to get in, too. That's pretty well, considering that a few years ago, they wouldn't touch crypto with a 10-foot pole.

Of course, because we're talking about creative ways to harvest alpha, we got to talk about cannabis. Todd Harrison recently joined Real Vision to talk about the cannabis markets.

TODD HARRISON: We're investing in the cannabis space or cannabinoid wellness space across the US. We had some Canadian exposure, but really US biotech, Australia, some Europe and we're looking at 3 to 5 years, we think the market is misunderstood here. Certainly, the total addressable market and the use cases are misunderstood so we're positioning to take advantage of that.

If you look at this news, and you use the dot-com parallel that there's going to be a lot of companies that don't make it but the ones that do are going to be generational opportunities, and that's how we're looking at this and we're trying to look through all this near-term volatility. It's a lot of retail holders right now, notoriously emotional retail holders that are moving with the herd mentality, which is why we're seeing these monolithic moves across the space.

AK: As funds continue to search for alpha and they continue to search for fees, they're having a hard time finding it down the traditional avenues, so they're taking side streets. Traditional funds are lowering fees but funds like Schwimer's is actually raising them because they could argue that they found a competitive edge. Others like Todd Harrison at CB1 Capital, they're focusing on specific parts of the market to hone in on an edge. Even the large institutions have had to adapt. That's why pension funds and endowment funds are turning to crypto.