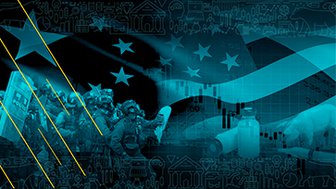 The news is full of stories about China. Whether it's…

Is there a case for buying beaten-down European bank stocks? AK explains what's been going wrong, and examines whether there'`s now a case for taking a second look.

AK: Check out this chart of Deutsche Bank. As you can tell, no one can actually figure out what the price should be. For a while there, it looked like it was going to zero. Now, in the past month, the stock has rallied some 25% but the long term chart does not look great.

What's going on here? Could there be a case for buying European banks at this point? Well, that's exactly what we're going to talk about on this week's episode of Real Vision's The One Thing. What's going on, investors? AK here. Last week, Real Vision took a look at the European banking system. There's a lot to talk about here considering the slow moving European politics, the ECB's not so effective monetary policy and then of course, the fractured banking system. I've already mentioned Deutsche Bank share price but that's not the whole story, because most of these banks' debt far outweigh their market cap. Deutsche Bank, for example, has almost 16.5 billion worth of equity compared to 611 billion worth of debt. Let's start with Thomas Mayer explaining what the core problem is.

THOMAS MAYER: First of all, we have a sluggish economic performance. Compare the US gross to the European growth, we are less dynamic, that's always a problem. Secondly, we have a fragmented banking market. The idea initially was once we created the Euro, Euro area banking market would consolidate. It hasn't. There are too many banks around. We have seen very little, hardly any cross border consolidation. They're basically eating each other up.

Third point, we have already four years here in Germany, a very flat yield curve. The banks rely on what they call their interest rate margin, I call it senior rich from money creation. You basically issue a credit, charge the creditor and put it on deposit and don't give any interest to the deposit, the banks call it interest margin. If your yield curve is flat, gone.

AK: All right, so slow growth combined with a fractured banking system and a flat yield curve. It's all in the context of a low equity flow versus debt, which makes the company share price way more volatile. What are you supposed to do as an investor? Could these possibly be value plays at this point? Well, Whitney Tilson, a value investor and former hedge fund manager had this to say.

WHITNEY TILSON: Well, generally, banks, particularly investment banks, which have big derivative books-- because I think you have to differentiate between just your standard retail banking franchises versus investment banks, like Deutsche Bank or something. Generally speaking, they make me nervous. Insurance companies I'd throw in there as well, and that there's Black Swan risk out there, because there's leverage and because they have big either derivative books or loan books where it's very difficult often. They're black boxes, so you don't know what's in there.

You just have to have a lot of confidence in management, generally, which is why Berkshire Hathaway certainly is something I felt comfortable owning, just because I've studied Buffett and Monger so closely and understand their fundamental conservatism. There aren't very many other financials. The financial sector, the history of financials is just littered with booms and busts and management teams that are out there trying to deliver steady earnings growth in a sector that often doesn't lend itself to that.

AK: Okay, so an American investor is scared of the big risk of Deutsche Bank's balance sheet, especially in an industry where it's difficult to deliver steady earnings growth. Tilson doesn't think the risk is worth the reward. What do European investors think? Well, here's Philip Vorndran with his opinion.

ED HARRISON: Why is it that you decided to take a hard pass on the banking sector?

PHILIPP VORNDRAN: Yeah, the decision was taken in 2007. When the first real information that the mortgage crisis could be more relevant appear to us, we looked into some of the German banks and realized there are some special purpose vehicles, nobody could give us clear information what the value of them was, what the risk involved was. We had the feeling the CFOs of the banks had no clue about what was going on. Then we made a very easy decision, if you don't understand the corporation, if you don't have a sound feeling for the quality and the profitability of a business model, then we can't justify investments like that to our clients.

AK: A successful German investment firm has stayed far away from these European banks because they don't think management actually understands the deep problems that they're in. It doesn't just stop at management problem. Simon White from Variant Perception explains that a secular change in interest rates for inflation expectations could destroy the whole industry.

SIMON WHITE: I think banks are going to struggle because of this tail risk essentially shifting because in the last 30 or 40 years, you could basically be reliant the fact that although rates might go higher, the general trend was lower, we just had a series of lower lows. In an environment where the tail risks shift to higher inflation, the risk is always going to be we're going to have bursts higher in shorter term rates. That I think, makes the bank business model extremely difficult because not only is it difficult for them, as I say they're borrowing shorter term assets, essentially borrowing in a shorter term period and lending longer term, they provide leverage to other people.

If there's less demand for leverage, they're really unable to provide that in the same way that they would like to so the whole last 30 or 40 years, if you like the dominating times of banking is will be very difficult under those circumstances. It's really about not about what instantly happens as I don't think it instantly get higher inflation, or instantly see shorter term rates rise, but the risk profile will change. That will really challenge that business model.

AK: White sees some existential threats on the horizon for the European Bank, whether you believe him or formed around Europe is in for an interesting future. Andreas Steno sums it up by explaining how the ECB is in between a rock and a hard place with the banks and export. He says that the ECB may have to choose one to save but in doing that, they're probably going to have to let the other one fail. ECB has a choice but what's really the endgame here? Well, Andreas has an idea for that and how to play it, too.

ANDREAS STENO LARSEN: It could be an issue for European banks, but I would expect European banks to struggle more due to the flat yield curve in Europe, basically. I would have said after the ECB meeting yesterday that it was a success if they managed to steepen the yield curve. They did not. Actually the opposite happened, they flattened it due to a very, very poorly designed tearing system, in my view. Actually the only that matters worse for the European banks, the struggles will continue, in my view, given that the yield curve did nothing but flattening yesterday.

ROGER HIRST: The tearing, what was the tearing that they announced or how is that going to work for these banks?

ANDREAS STENO LARSEN: Well, they announced an exemption for all banks in the Eurozone six times their marginal reserve requirement. That's basically the buffer that a bank needs to hold at the ECB. Six times that amount will be exempted from the negative deposit rate at ECB. The issue is that all of the deposits, they are part in German, French, Dutch and Finnish banks.

When Italian banks are exempted six times their marginal reserve requirements, they basically allow the Italian banks to place all of their excess liquidity at zero at the ECB because they don't have a lot of excess liquidity. That could lead to a spike in refer rates in southern Europe. Maybe there is actually a risk of an unintentional tightening of financial conditions in southern Europe due to this tearing system. One size doesn't fit all.

My base case is that we will get a rebound in the global economy by April next year. Before that, we're going south still. I have a base case of a selloff in equity markets in Q4. For some reason, that's always in Q4. I think the withdrawal of dollar liquidity due to the US Treasury building of its cash buffer again will be the trigger of that selloff. A dollar liquidity removal will be bad news to risk appetite in general.

Therefore, my base case is to just stay long safe haven assets for the next four or five months. Then that could be the trigger of that soft QE4. Maybe it's too early to expect it by late this year but maybe in Q1 next year, after we've seen this risk off environment. Then the Fed could inject liquidity again and maybe we're back to Hallelujah, at least for some time.

AK: He thinks that we're in for equity selloff in Q4 because of a dollar squeeze and then the central banks will respond with more easing which will send equities higher once again. Over the next six months, he sees safe haven assets like treasuries or precious metals outperforming, but as soon as the central bank start QE up again, it should be time to get back into equities. Whichever way you want to play it, make sure you hang out with us at Real Vision. I'll talk to you next week.