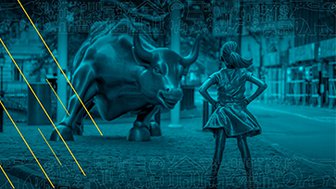 For the last decade or so, the stock market has…

Since 2008, the housing market has rebounded and is in a much stronger position – or is it? On this week's episode, AK considers the possibility that a housing market that's nearing all-time highs is flying too close to the sun.

AK: It's always fun to watch economists go back and forth about inflation and deflation. But since the recession in 2008, we've been in this kind of financial Twilight Zone. Everybody keeps talking about doom, gloom and deflation, but the S&P just keeps rising. My question is why is my rent so damn high? I bet a lot of you are watching this right now crying in your New York City shoe box with your air pods on, so you don't wake up your roommates in your $5,000 a month studio. I mean, seriously, how great of an investment must real estate be? Well, make yourself at home because today, we're going to talk about residential real estate and it's all going down on Real Vision's The One Thing.

What's going on, investors? AK here. On this episode, we're going to try and answer three questions. One, why are rents so high? Two, is it worth it to buy a house right now? And three, is housing the next big shoe to drop and could it drive the economy off a cliff again? Keith Jurow thinks we're standing on thin ice when it comes to the housing market.

KEITH JUROW: There are very dangerous circumstances today that you have to think about in terms of making decisions concerning houses. The first is that there were still millions of these re-defaulting modified mortgages that are growing that are still problem and like I said, there's really no solution to that.

If you add to that the fact that you have millions of homeowners defaulting or in long-term delinquencies, who have no intention of repaying the mortgage, that's what you have to understand. If you haven't paid a nickel over the last five years, you have no intention of repaying it, and you think that you can stay as long as you can, and isn't that just great for them? The only ones who lose are the lenders, which we don't spend very much time talking about.

We also have what I've mentioned before, home sales, which are declining. That's always a dangerous sign. And the last thing as I said is the number of properties on the market actively listed is growing and shows no sign of turning around. If that continues, that's really big.

So, what does that mean for you? What would I do? There is no way I would consider buying a house either to live in or as an investment with all of these circumstances and risks that I've been talking about. And the second thing is if I were a seller, if I were a homeowner, I would seriously consider selling before things get much worse.

AK: And that backs the question, how the heck did we even get into this mess? Keith had this to say-

KEITH JUROW: If you think about it, it was like money falling from the sky. And in California, nothing was crazier than there. You could pull out 100,000, 200,000, 300,000 in cash because of the growing value of your property. The lenders were more than willing to shovel it out because they thought the prices would go to the sky.

And what happened when home prices leveled off? Millions of these homeowners especially in California and some of the larger metro- New York City and Chicago, around the coast, but it was nationwide. They found themselves with a much larger mortgage.

And when prices began to turn down very quickly, the property was underwater. They were underwater, they started defaulting in droves. And that was one of the main reasons why the mortgage servicers decided we have to modify these millions of mortgages, otherwise this price collapse will just continue.

AK: That's a pretty bleak outlook. And then Game of Thrones style, if you think this has a happy ending, you haven't been paying attention. Jurow adds-

KEITH JUROW: You would think that with all of these solutions that that would solve the problem, but it didn't. Because almost from the beginning, millions of these modified mortgages started re-defaulting. The homeowners for some reason, whatever it might, they decided that my house is underwater, and I can't really afford the mortgage, or I have no intention of repaying. And so, they started re-defaulting. Some of them have re-defaulted two or three times.

So, this problem- you have to understand- is getting worse as we move forward. My view is that there really is no solution to this massive problem of re-defaulting modified mortgages. We're talking about millions of them. If that's the case, then at some point, many, if not most, of these modified mortgages that are re-defaulting will eventually have to be foreclosed and liquidated. And when that happens, then it will really hit some of the major metros hard, and prices could actually begin to decline- I hate to use the word- but again.

AK: And look, the bottom is probably not going to fall out tomorrow. But maybe we're seeing this scenario rear its ugly head somewhere else. Gerard Minack came on Real Vision to give an update about Australia. Listen to him describe how housing weakness is infecting the entire economy.

GERARD MINACK: What's happened over the last quarter or two is we're seeing signs downdraft in housing, borrowing and wealth- to-fix is starting to build steam. And that's making an increasingly likely there'll be a recession. I'm not making recession my investment base case yet. But if we were to get another two or three months of data, like the sort we've had over the last two or three months, and I think investors should make recession their investment base case in Australia. And if we were to see a recession, trust me, it would be world's best practice. This would be disaster given how indebted we are, how expensive your asset prices are, and the inability of policymakers to respond.

AK: Sounds familiar? Yeah, it sounds just like the situation in the US. So, listen, whether Jurow is right or not, it still looks like the other shoe is poised to drop. We all need to pay attention to this shifting narrative and decide when's a good time to get in and when to get out. And I know I haven't answered the question yet about why the rent is so high. Well, it's high because real estate like every other asset nowadays has been financialized. That means the main purpose of your house is not to live in anymore. No. Now, it's just a financial asset that's used for speculation.

And if you want to stay up to date on this housing situation to make sure you don't get screwed again, well then, make sure you subscribe to Real Vision. I'll talk to you next week.