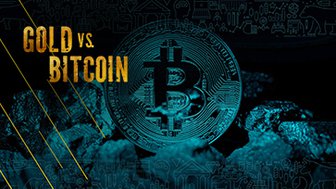 This week, AK examines the history of money, breaks down…

Wrapping up Real Vision's Gold vs Bitcoin coverage, Dan Tapiero sat down for an hour-long interview with legendary gold equities investor John Hathaway. This week, AK breaks down that conversation to reveal a golden opportunity for the investor, the trader, and the contrarian.

AK: Over the last few weeks, we've talked a lot about what the best safe haven is, gold or Bitcoin. What we ended up learning is that it's probably a combination of both that's going to help save you in the next financial crisis. In the short term though, how do you profit off playing them? Recently on Real Vision, we interviewed legendary gold investor John Hathaway. We're going to break down his conversation on this week's episode of Real Vision's The One Thing.

What's going on, investors? AK here. The other week, we learned that it probably makes sense to hedge your bets with both gold and Bitcoin. For long term safety, you could get some physical gold and then also hold some Bitcoin in a digital wallet. In the short term, it's more complicated to play so it's a good thing we got our experts to help us. John Hathaway is one of the most successful gold equity investors around. Here, he's explaining why gold is his play.

JOHN HATHAWAY: When I hear this thing in the financial media that the dollar is the best house in a bad neighborhood, I think to myself, this is ridiculous, because the neighborhood is going down the tubes. Maybe the dollar is the tallest midget, all these stupid analogies, but at some point, capital will seek out safety, which is what gold represents. I have to point out that gold has outperformed every stock market since 2000. Most people don't even think about that.

DAN TAPIERO: That's been in a relatively benign-- over a 20 year period, we've had ups and downs. I think that's almost separate from what your view or my view or anyone's view is. It just is a fact.

JOHN HATHAWAY: It's a fact.

JOHN HATHAWAY: Gold has outperformed bonds and stocks. Not only the S&P. Gold is at record highs. And yen, I think Canadian dollars, the pound, the euro, and Aussie dollars and just the US dollar, were still struggling. It's because the dollar has been relatively strong compared to other currencies.

AK: John might not like the analogy but he pretty much echoes what Rick Rule said last week. The US dollar is the prettiest mare at the slaughterhouse. When it's time to pay, the piper capital is going to seek safety and safety is gold or Bitcoin for the contrary. On top of that, gold has actually outperformed both stocks and bonds over the last 20 years, which is pretty surprising because even with an unprecedented economic expansion and a crash or two, gold has still outperformed your more standard assets. Long term gold is a viable investment but only if you're patient and if your boss approves your allocation, but more on that later. What about the short term though? Here's what Hathaway had to say.

JOHN HATHAWAY: The way I've heard it put best, and I've learned after all these years never to put a number and a date in the same sentence terms of any price.

DAN TAPIERO: What do you got?

JOHN HATHAWAY: I thought it was very well put by David Rosenberg of Gluskin Sheff. David gave an interview with the National Post in Canada. Then he and I sat in the same stage at Beaver Creek and we talked about it further. What he said, and I think this makes a lot of sense, is that we have a cycle high in bonds in terms of valuation.

We have a cycle high in stocks in terms of valuation. The one major asset class that's been left behind is gold, and the interviewer said, would you be surprised by a $3,000 gold? Now this is a guy who's not a gold guy. He's a rational economist, made his career-- you're shaking your head.

JOHN HATHAWAY: Okay, but he's a well-respected guy. He's not in the gold camp, but he said he would not be surprised by a $3,000 gold. I think that his point was that gold needs to make a cycle high-- and pick any number.

AK: Hathaway and another Real Vision contributor, David Rosenberg, both agree that over the next 18 months, gold can hit 3000. On top of that, Hathaway has an ace up his sleeve. I'll let him explain it to you.

JOHN HATHAWAY: I think the fact that mainstream investing, S&P names, tech, SOXX-- all that has done fine. Why would you venture into something that hasn't performed? Frankly, it's the third rail of investment ideas, because I've heard of your partner getting tossed out of an office because he was going to talk about gold. He said, don't you dare talk about gold to my team. Some RIA in Wisconsin or someplace like that. Why is it the third rail? Because it hasn't performed for six years.

DAN TAPIERO: Though it's the number one performer from 2000. People ignore that.

JOHN HATHAWAY: Memories are short. We understand that, but the other thing is that even when I talked to somebody who could allocate the gold, they may do it personally, but they will not do it for their clients, because there's career risk. If you underperform, if you're a mainstream investor, and you're 20 basis points let's say, behind the S&P, and you had a 5% allocation to GLD or GDX or the thing we do, you could get canned. You certainly would find tremendous disapproval.

DAN TAPIERO: Doesn't that mentality have to change?

JOHN HATHAWAY: Well, there was a time, and I remember it, when gold was really doing well and everybody wanted in at the top.

JOHN HATHAWAY: '10, '11. Well no, I'm old enough, but I wasn't doing gold then. That just shows you how cycles work, and how psychology changes. We're just coming out of a six year nuclear winter. It's hesitation, early stage stuff.

AK: Despite the fact that gold has outperformed over the last 20 years, Hathaway's argument is that allocators are afraid how gold will look in their portfolio to the both their supervisors and other investors. What we got here is a contrarian's best friend, human nature. Now that the secret's out, where do you get exposure? Here's Hathaway again.

DAN TAPIERO: I think you mentioned before the GDX, which is the VanEck ETF--

DAN TAPIERO: On a larger gold miners. I looked at the chart recently, and it's the same price, basically, that it was in 2008, which is totally crazy given what looks like to be a pretty good future. What's your sense just broadly about the sector? Can we go back up to those highs that we were at in '06, '07?

JOHN HATHAWAY: It has to be driven by the gold price. You look at the fundamentals, and every company has different aspects to it. There's local political risk. There are so many different things in terms of vetting and asset and vetting and management. At the end of the day, there's only one thing that really matters, and that's the gold price. DAN TAPIERO: Well, it's also how they manage their businesses.

JOHN HATHAWAY: There's all of that.

DAN TAPIERO: Right, but it's not going to have a big move without gold.

JOHN HATHAWAY: You're not going to get generalist investors coming into the space unless you have an eye popping move in the gold price.

DAN TAPIERO: These things are really super cheap. Some of them trading at four or five times EBITDA.

JOHN HATHAWAY: They're ridiculous. Particularly the smaller ones. It's almost to the point where-- we figured this-- that you can buy a new mine by buying an existing company at a 35% discount to what it would cost-- let's pretend your Newmont or Newcrest or one of them, to start from scratch.

The make or buy-- you can buy a premium in the market for a single asset company and have it be accretive to obviously, the target and also, to your own shareholders. You're saving all that money on building a new mine. I've never seen that in 20 years of doing this.

DAN TAPIERO: Wow, that is cheeky. JOHN HATHAWAY: To me, that just suggests that when the psychology changes somewhat-- this is again, in the corporate suites of the larger companies-- you will see some not merger of equals, which was Barrick-Randgold, for example, but larger companies swallowing up smaller ones.

AK: Ultimately, a higher moving gold will also move gold mines. The combination of gold potentially being at $3,000 and the consolidation of the mining industry is giving us a great setup. That's not to mention the psychological disconnect that institutional investors have about gold. Either you're a contrarian, long term investor or short term trader, gold has an opportunity for everybody. Hathaway suggests getting in early on gold mining equities like GDX to profit from this bull market. If you want to catch this full interview and learn more about gold, make sure you subscribe to Real Vision. I'll talk to you next week.